Just because oil prices have started going up doesn't mean the worst is over for these companies.

The oil industry is in disarray. With few exceptions, this is the sector that investors should avoid right now. Yes, oil prices have gone up since bottoming out in late April, but the situation on the ground, particularly for the companies closest to the well, is still deteriorating. Simply put, every day that passes compounds things, since oil production continues to exceed demand.

Case in point: We asked some of our top energy contributors in late April to predict which oil stocks could go bankrupt in 2020, and we've already seen one of the four file for Chapter 11 and two others hire restructuring advisors. So we decided it's time to take another look at the oil sector, as it becomes more apparent which companies could be in the most trouble.

This time the list includes five oil stocks on the brink of financial disaster: Transocean (RIG 0.55%), Occidental Petroleum (OXY 4.77%), Northern Oil & Gas (NOG 4.31%), Chesapeake Energy (CHKA.Q), and Denbury Resources (DNR). Keep reading to learn why our experts think these five oil stocks are very much at risk of being the next to file for bankruptcy protection. 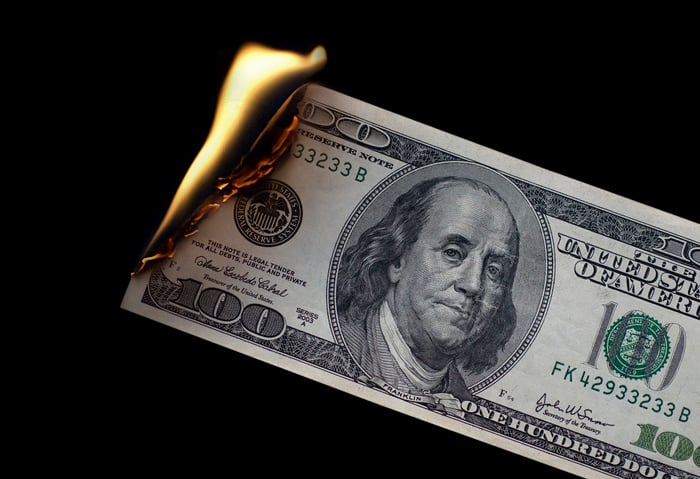 Matt DiLallo (Transocean): A bankruptcy wave is starting to wash over the offshore drilling industry. Diamond Offshore Drilling has already filed, while Valaris seems days away. I think Transocean is next in line, given its massive funding requirements through the end of next year.

Credit rating agency Moody's warned that Transocean was is one of the most vulnerable oil stocks to a credit issue because of its upcoming financing needs. Not only does it have $1.7 billion of capital requirements for new drilling rigs, but it also has $1.1 billion of debt maturing through 2021. With junk-rated credit, and the issues in the offshore sector, Transocean will probably struggle to finance these obligations.

On a positive note, it does have some internal funding, with a total of $3 billion of liquidity -- $1.7 billion of cash and $1.3 billion of available credit. It also has a strong contract backlog that should provide it with between $600 million and $800 million of operating cash flow through the end of next year. While those funding sources are enough to cover its financing commitments during that timeframe, its liquidity will slowly drain to as low as $800 million by the end of 2021. Given that tightening situation, and the fact it has more debt maturing in 2022, Transocean seems destined to declare bankruptcy.

You don't hire a restructuring specialist when things are going well

Last year, Occidental Petroleum made a massive bet on shale drilling when it acquired Anadarko Petroleum for $38 billion. To finance that deal, it took on a mountain of debt and even issued $10 billion in preferred shares to Berkshire Hathaway. At the end of this most recent quarter, the company reported total debt of $38.5 billion, $2.4 billion of which is due by the end of the year. 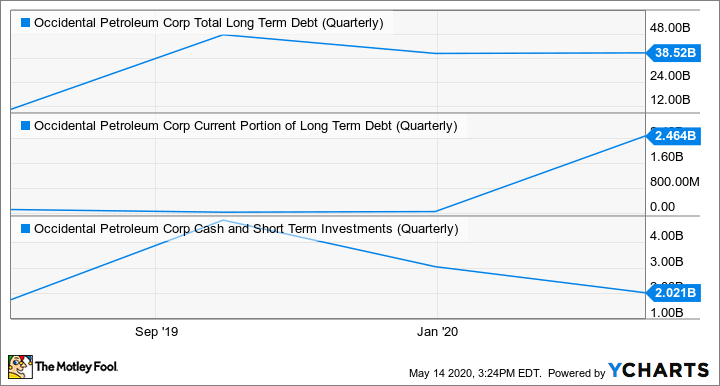 Occidental's original plan was to sell assets to raise cash, but that avenue is looking more troubled than before. On May 5, the Algerian government failed to approve a deal to sell Occidental's Algerian and Ghanaian assets to Total for $5 billion. Also, Occidental is struggling to find a buyer for its stake in Western Midstream Partners, which was supposed to be a significant source of cash to trim its debt load. With these deals going sideways, management admitted on its most recent conference call that anticipated asset sales won't be enough to cover its debt costs. Now, management has hired Moelis & Co., an investment bank known for handling restructurings, to help find "alternative methods" for trimming its debt load.

There are no instances where hiring a restructuring specialist is a bullish sign. The company has substantial debts and assets no one seems to want to buy right now. With $10 billion in preferred equity in addition to its debt load, there are a lot of people in front of common shareholders looking to get paid. If this oil downturn drags on any longer, Occidental is likely to be pretty high on the "next to file chapter 11" list.

Open the door for your maturity date

John Bromels (Northern Oil & Gas): A company generally doesn't declare bankruptcy unless it has a major debt maturity coming due and no apparent way to pay it, plus no obvious way to stave off creditors by selling assets, issuing additional stock, or using other financial tricks. While there are a bunch of oil companies that fit this profile, they're so small that I'm prohibited from writing about them so I don't influence their share price. Most oil companies with a market cap above $200 million don't have big debt maturities scheduled in 2020, making a bankruptcy this year unlikely. So I'm going with the next-best thing: Bakken Shale producer Northern Oil & Gas.

Northern needs to come up with $65 million by Jan. 1, 2021, to repay an unsecured credit note to VEN Bakken. If it can't scrape together the cash by the end of 2020, it could be a bankruptcy candidate.

Cash is in short supply at Northern -- just $8.5 million at the end of March. Meanwhile, the company has $975.3 million in long-term debt, more than 4.5 times trailing EBITDA. With its share price under $1, raising cash by issuing new shares isn't a viable option, and besides, Northern has already boosted its share count by more than 500% since 2018. 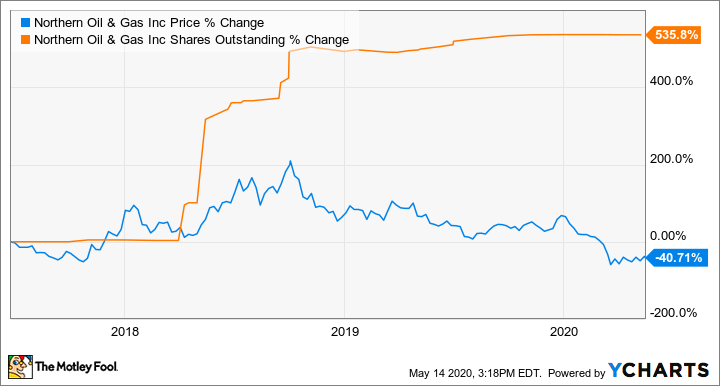 Northern does have $210 million left on its revolving credit line, which it could use to pay off the VEN Bakken note -- but that represents the bulk of its liquidity, so it might have to use that money on something else first.

Bottom line: While Northern may not declare bankruptcy in 2020, it's not in very good financial shape. That could make its next debt maturity in 2022 more problematic.

The end could be around the corner

Travis Hoium (Chesapeake Energy): When oil and natural gas prices crashed last month, there were more than a few companies that found themselves in a precarious financial position. Maybe no company was less prepared than Chesapeake Energy, the highly indebted energy producer. 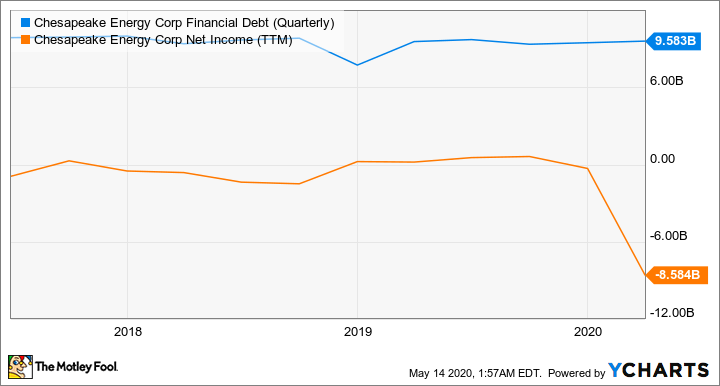 Chesapeake was only breaking even before the oil crash hit, and once it did, the company counted losses in the billions. Putting that into perspective, last quarter's loss was a whopping $8.3 billion, dwarfing the company's $94 million market cap.

It may only be a matter of time before Chesapeake Energy goes bankrupt. The company has warned investors that it may not be able to continue as a "going concern," the language that often warns of future bankruptcy.

Big bets have always been a big part of Chesapeake Energy's strategy, and for a long time they paid off. But in 2020 the drop in price of oil has brought the company to the brink of bankruptcy. I wouldn't want to be anywhere near shares when that happens.

Never a good sign when a company does this

Jason Hall (Denbury Resources): On May 7, oil producer Denbury Resources filed a notice with the SEC that it wasn't going to file its first-quarter earnings report on time, because of the impact of the COVID-19 pandemic on its business. The company said it would file by June 25, so investors are still six weeks from getting an update on the independent oil producer's financial position.

Considering the state of its business and balance sheet at the end of 2019, there's serious reason for worry: 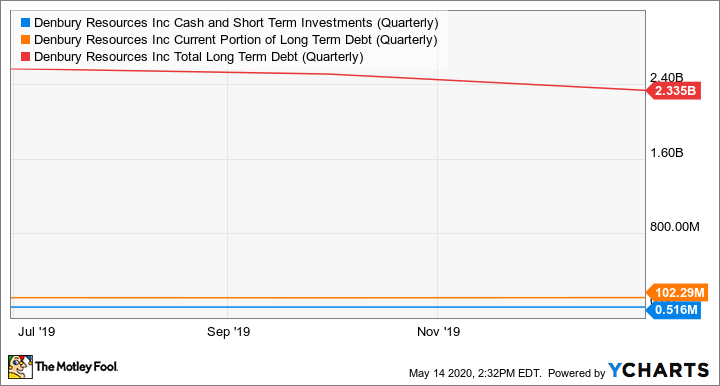 Denbury also finished the year with more than $500 in available liquidity, but that amount could be substantially lower now, with its lending base redetermination on May 1 having come and gone. Needless to say, with oil prices down by more than half since the beginning of the year and a protracted downturn in demand likely, the banks that lend to oil producers may not be nearly so generous today, especially with another $615 million in secured debt due in 2021.

In its favor, Denbury had 69% of projected 2020 production hedged at $57.21 per barrel as of late February. But since then, nearly everything has changed in the oil patch. Those hedges will help offset the decline in prices, but won't make up for the crash in demand that could keep Denbury from selling excess production at any price.

Put it all together, and Denbury is caught between a rock and a hard place, with potentially a lot less liquidity than management expected to have, and nowhere to turn but bankruptcy if lenders won't play ball.