Please ensure Javascript is enabled for purposes of website accessibility
Log In Help Join The Motley Fool
Free Article Join Over 1 Million Premium Members And Get More In-Depth Stock Guidance and Research
By James Brumley - May 18, 2020 at 9:59AM

The telecom powerhouse spends a fortune just to stay afloat, but that's nothing new, unusual, or unpredictable.

It would have been easy to dismiss as typical corporate cheerleading. What else is an incoming CEO going to say other than the company's future looks bright?

When AT&T (T -0.38%) CEO-elect John Stankey suggested the company could "comfortably cover its dividend" at the same time it continues to whittle down its debt, though, he wasn't just blowing smoke. Despite the stock's poor performance since its 2016 peak, AT&T's results have remained solid -- not necessarily impressive, but solid. There's plenty of income left over not just to pay the dividend and pay off debt, but also to continue investing in things like 5G and even entertainment for its Warner Media arm.

AT&T is a lot of things, but a growth machine isn't one of them. Last fiscal year's top-line growth of 6% was a bit better than average, and the resulting 7% year-over-year growth in operating income was hardly a show-stopper. 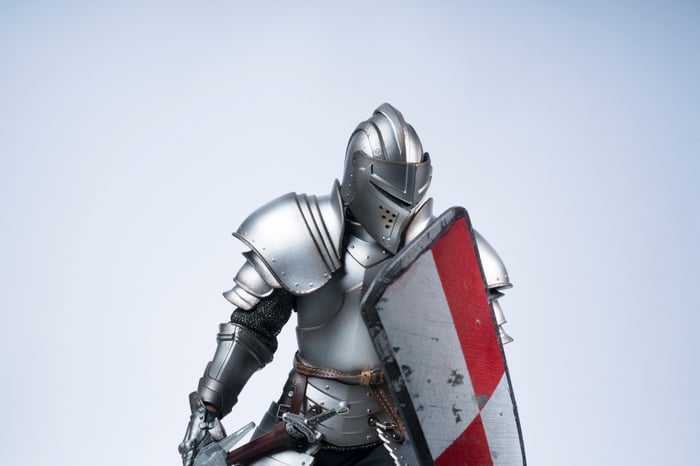 The telecom (and now media) giant isn't built to be a growth vehicle, though. It's a cash cow, and a reliable one at that. It spends boatloads of money on equipment and employees, and more recently, making interest payments on $147 billion worth of long-term debt. It also offers a rather generous dividend from what's left over after paying all of its bills.

How much is left over? First things first.

The graphic below breaks down AT&T's spending by major category for each of the past three completed fiscal years, and has been adjusted to reflect the 2018 completion of its purchase of Warner. Note that minor and non-recurring expenses like asset impairment and gains or losses on ownership of affiliates have been left off, just for the sake of simplicity. 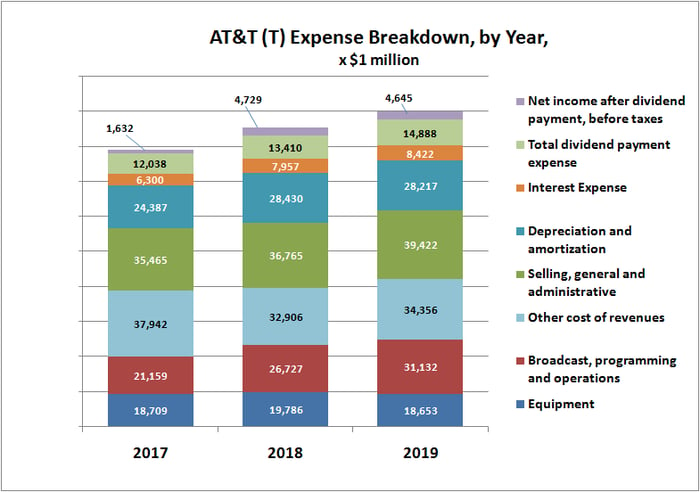 With nothing more than a quick glance it looks as if AT&T is skating by on paper-thin post-dividend margins. And that's not an inaccurate assessment. That's not exactly new for this company, though. In fact, that's been a long-standing norm for the telco industry. As an example, of the $132 billion in revenue that rival Verizon (VZ 0.17%) reported for last fiscal year, only a little more than $19 billion of it was booked as net income. And of that, $10 billion was paid out to shareholders as dividends. This is simply a capital-intensive and labor-intensive business. Having more than $4 billion left over -- and closer to $5 billion -- after dishing out dividends is a pretty good year for AT&T.

That's not the biggest takeaway from the graphic, however. Far more impressive is how evenly each of these expense items has scaled up with the company's modest expansion. This degree of predictability is how Stankey can say the dividend remains comfortably payable while AT&T also continues to "generate strong cash flows to invest in key capital areas including fiber, 5G and HBO Max." He and the rest of the management team have a clear idea of the spending that lies ahead from one year to the next.

The market has brutalized the stock of late. AT&T shares now stand nearly 27% below where they were priced just at the end of 2019. That selling suggests the company's bottom line is in serious trouble.

The fact of the matter is, though, this is the same AT&T we knew and loved in 2019, in 2018, and 2017, and so on. Everything's just scaled up a little bit more now, making the recent selling mostly unmerited. Indeed, that selling is ultimately an opportunity.

Again, investors seeking rapid growth will want to look elsewhere. AT&T can't offer it. What it can offer, though, is consistent income that translates into a dependable dividend, and a dividend that's now grown for 36 consecutive years. Newcomers will be able to plug into that consistency at a current dividend yield of just over 7%.