Please ensure Javascript is enabled for purposes of website accessibility
Log In Help Join The Motley Fool
Free Article Join Over 1 Million Premium Members And Get More In-Depth Stock Guidance and Research
By Keith Speights - May 19, 2020 at 7:02AM

Uncle Sam could be sending more money your way in the not-too-distant future. Buying these stocks will put the extra cash to good use.

Some Americans are still waiting on their stimulus checks from the CARES Act. But that's not stopping representatives in Washington, D.C., from pushing for another wave of economic stimulus. The U.S. House of Representatives passed a new stimulus bill late last week. Although the legislation is likely to die in the U.S. Senate, the White House has reportedly signaled its willingness to move forward with more stimulus spending to help Americans.

It could be just a matter of time before more money makes its way into the pockets of Americans. Here are three great stocks to buy if you get a second stimulus check. 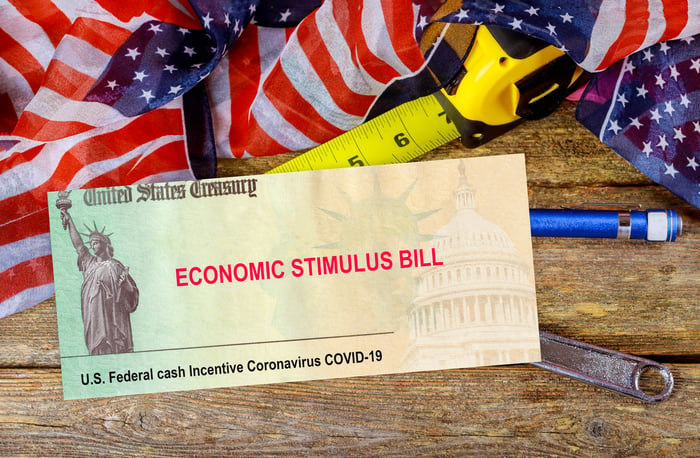 The long-term prospects for renewal energy sources like hydro, solar, and wind are excellent. Brookfield Renewable Partners (BEP -0.32%) ranks as one of the best renewable energy stocks on the market.

But don't overlook Brookfield Renewable's growth opportunities. Wind and solar are already attractive sources of electric power with their low costs. Countries across the world, as well as large states in the U.S., are behind on their goals of converting to clean energy sources.

Brookfield Renewable plans to invest up to $800 million in 2020 on development projects and acquisitions to boost its energy production. I expect the company will continue to add capacity over the next several years. The combination of Brookfield Renewable's solid growth prospects and its terrific dividend make this stock a top pick.

Sure, Mastercard (MA 0.44%) has taken a hit with the ongoing COVID-19 pandemic. The payment processing giant's profit dropped 9% year over year in the first quarter of 2020 while revenue growth slowed to only 3%. But the headwinds from the coronavirus outbreak will only be temporary.

The pandemic could even boost Mastercard's prospects over the long run by further accelerating the expansion of e-commerce. More consumers have shopped online while they've been stuck at home. And they haven't used cash or checks to make purchases. They've either used credit cards or digital payment methods, many of which rely on Mastercard's huge payment processing network.

It's not just individual consumers who are shifting away from using cash and checks, though. Mastercard recently launched a business-to-business platform called Track that enables businesses and their suppliers to use multiple electronic payment methods in their commercial activities.

The future is a world with significantly lower use of cash and much higher use of digital payments. I think that Mastercard will be a big winner in this future world.

Some investors are leery of buying biotech stocks. But Vertex Pharmaceuticals (VRTX 0.75%) isn't the super-risky kind of biotech stock that comes to mind for a lot of people.

Vertex enjoys a virtual monopoly in treating the underlying cause of rare genetic disease cystic fibrosis (CF). Its newest CF drug, Trikafta, is off to a fantastic start in the U.S. and is likely to soon win European approval. Vertex expects the addition of Trikafta to its lineup of three other CF drugs will enable it to expand its addressable patient population by more than 50%.

Meanwhile, the company is working hard to move beyond CF. Vertex's pipeline includes promising phase 2 programs targeting pain and another rare genetic disease, alpha-1 antitrypsin deficiency (AATD). The gene-editing therapy that Vertex and partner CRISPR Therapeutics are evaluating in phase 1/2 studies for treating (and potentially curing) rare blood diseases beta-thalassemia and sickle cell disease could be an even bigger game-changer.

The company's success in CF has made it highly profitable and enabled Vertex to amass a big cash stockpile of $4.2 billion as of March 31, 2020. Vertex completed a key acquisition last year, buying Semma Therapeutics for $950 million to get its gene-editing therapy that could potentially cure type 1 diabetes. Look for the biotech to make more acquisitions in the future to fuel even greater growth.