Please ensure Javascript is enabled for purposes of website accessibility
Log In Help Join The Motley Fool
Free Article Join Over 1 Million Premium Members And Get More In-Depth Stock Guidance and Research
By Rich Smith – May 26, 2020 at 9:45AM

Last month, in a blog post that verged on desperation, Britain's most famous billionaire begged the British government for a bailout of his Virgin Atlantic commercial airline. A "devastating ... pandemic" had dried up demand for air travel and grounded much of Virgin Atlantic's fleet, posing an "unprecedented crisis" for the discount airline. Without a $620 million loan from British taxpayers, Virgin America could "go bust" (warned Britain's Guardian newspaper).

Last month, I explained how trouble at Virgin Atlantic could spill over into Virgin Galactic (SPCE 4.99%), Branson's experimental effort to spin a space tourism industry, by distracting its owner and starving Virgin Galactic of financial support from its parent company. And now it seems the situation could be even worse than that.

Branson might have to sacrifice Virgin Galactic in order to save Virgin Atlantic. 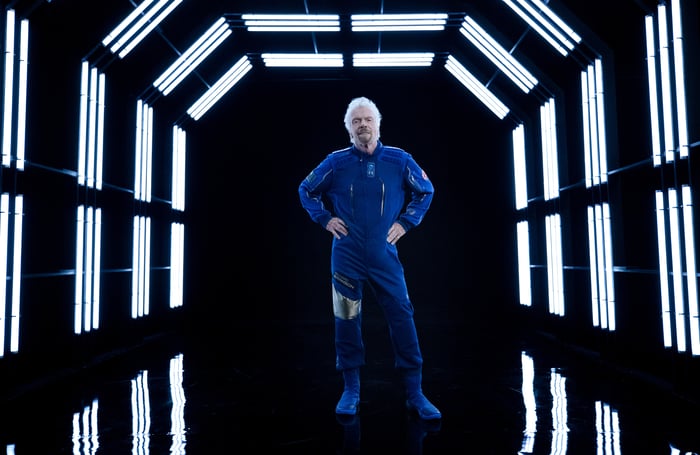 We got one clue to this potential outcome earlier this month, when The Wall Street Journal reported that Branson is planning to sell 25 million shares of his stake Virgin Galactic to raise $486 million -- cash that he will then repurpose to support his failing Virgin Atlantic airline, as well as the rest of Virgin Group's "portfolio of global leisure, holiday and travel businesses that have been affected by the unprecedented impact of COVID-19." This sale, notes the Journal, would reduce Branson's ownership stake in Virgin Galactic to less than a 50% controlling interest.

As the Journal describes it, the math works like this: Branson's Virgin Group parent company owns 80% of "Vieco 10 Ltd," which in turn owns 69% of Virgin Galactic. Selling 25 million shares would reduce Vieco's stake to 42%, and Virgin Group's 80% stake in Vieco would accordingly thereby shrink to only a 33.6% stake in Virgin Galactic.

Or more simply: Branson has effective voting control over Virgin Galactic before the share sale goes through. After selling 25 million shares, he won't anymore.

How much will Branson sell?

It's even possible that, should this recession drag on and Virgin Group's need for cash to support Virgin Atlantic and its other "global leisure, holiday and travel businesses" grow, Branson could exit more of his stake in Virgin Galactic. We know this because, on May 1, 2020, Virgin Galactic made an S-1 filing with the SEC describing plans for Vieco and other "selling stockholders" to unload as many as 150.5 million shares of Virgin Galactic stock on the market.

Now, according to Virgin Galactic, it originally filed to sell these shares because it "had a contractual obligation to [do so] within 6 months of" closing its merger with Social Capital Hedosophia Holdings last year. But as Virgin Group's sale earlier this month makes clear, now that it has registered the shares for sale, it's already proceeding to act upon the registration and sell at least some of its shares to raise cash for Virgin Atlantic.

The question now is: Will Branson stop at selling just 25 million shares? After all, once you've lost control, there's less of a disincentive to keep on selling. Or will he proceed to sell more of the 114.8 million total Virgin Galactic shares that he owns through Virgin Group and Veico?

These are not mere academic questions, either. Since WSJ reported on the 25 million-share sale, Virgin Galactic's stock price has plummeted nearly 20% as investors presumably (and understandably) began to question Branson's commitment to the venture, and his willingness to financially support Virgin Galactic until it reaches commercial viability. Further stock sales could continue to eat away at investor confidence, and further erode support for Virgin Galactic's stock price. Conversely, if Branson retains a significant stake in Virgin Galactic, investors who bought in hoping to get in on the ground floor of a growth story might well stick around to see how the growth pans out.

Selling his entire stake could raise as much as $1.7 billion in cash for Branson -- three times what he says he needs to keep Virgin Atlantic afloat. But Branson probably doesn't need to do that. And selling his entire stake would mean abandoning any chance of profiting further if Virgin Galactic proves successful in forging a new industry in space tourism.

After all, Virgin Galactic has proven to be a surprisingly popular company (for a company that's making no profits, that is). Although no longer selling at its pre-coronavirus high north of $37 a share, and even after its mid-May slide, the stock is still up a very respectable 58% from the start of this year, when many, many other stocks are down.

Thanks to that success, Sir Richard Branson now has access to all the money he needs to save Virgin Atlantic, and probably enough cash to support his other Virgin companies, too. And assuming he doesn't sell too many Virgin Galactic shares, he still has an opportunity to make a lot more money if space tourism takes off as an industry.

My hunch: Virgin Group will continue selling shares until it has raised enough cash to stabilize Virgin Atlantic and his other companies, but will hold onto the rest, and continue to retain a substantial interest in Virgin Galactic going forward.

Assuming he's confident that Virgin Galactic will succeed in launching its first commercial spaceflight later this year, that's the right move to make -- and it could save Virgin Galactic investors from suffering further losses, too.