Please ensure Javascript is enabled for purposes of website accessibility
Log In Help Join The Motley Fool
Free Article Join Over 1 Million Premium Members And Get More In-Depth Stock Guidance and Research
By Rich Smith – Updated May 27, 2020 at 2:20PM

The stock market is sending investors confusing signals Wednesday morning, with the Dow index of blue chip names rising nearly a full percentage point in 11:30 a.m. EDT trading, but the Nasdaq down 1.3%.

Perhaps the most curious data point in all of this, though, is the fact that shares of bankrupt Hertz Global Holdings (HTZG.Q) just jumped 118%, pulling up rival car renter Avis Budget Group (CAR 6.34%), up 5.8%, along with it. At the same time, similarly bankrupt Latam Airlines Group (NYSE: LTM) is down 14.9%.

If you ask me, JPMorgan Chase is at the center of all this uncertainty. 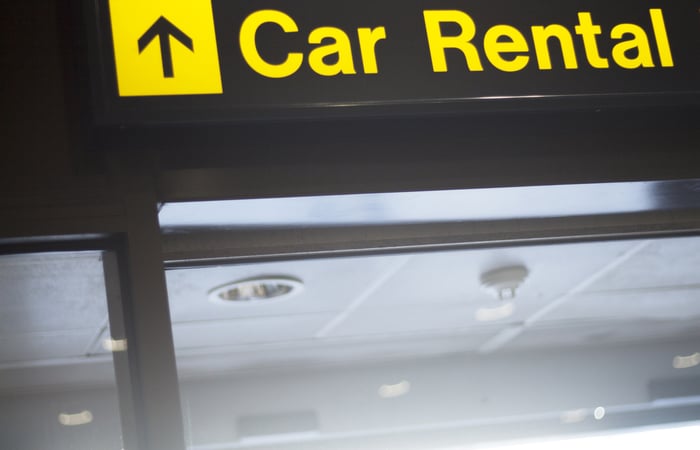 Yesterday was important for the stock market -- not just because of the rally in the S&P 500, but because in the midst of that rally, we saw two major companies file for bankruptcy: Hertz and Chilean flyer Latam Airlines. (Hertz actually filed for bankruptcy on Friday, but Tuesday was the first day investors were able to trade on the news).

Although both firms were doing fine earlier this year (Latam was profitable, and Hertz was getting there), COVID-19 has done a number on the travel industry. Between travel restrictions and stay-at-home orders, the airlines that fly people to their destinations and the car rental companies that help them move around once they get there got knocked down as their business dried up. In the case of LATAM, some 95% of flights have been grounded since the coronavirus struck. Meanwhile at Hertz, the company has had to lay off half its staff, close some locations, and subsist on minimal revenue at others, as the trend moves closer to "zero revenue," warned the company's CEO.

Today, however, stock market optimists got a confidence boost when JPMorgan Chase CEO Jamie Dimon chimed in and predicted "a fairly rapid recovery" in the U.S. "The government has been very responsive," Dimon said, with government stimulus money flowing forth in a torrent that "fills every crevice" of the stock market -- at least in the U.S.

This is not just good news for JPMorgan stock, either. This government money that Dimon speaks of seems to be filling crevices at the big U.S. car rental companies as well -- but not at Latam.

That's not surprising. As a Chilean airline, Latam can't be expected to benefit from U.S. government bailouts, and could have a hard time climbing out of bankruptcy. But I'm not sure I'd be so quick, as other investors are being, to rush into shares of just-as-bankrupt Hertz, either.

After all, as The Wall Street Journal pointed out in its big weekend piece on the Hertz bankruptcy, "equity holders rarely survive a bankruptcy," and the highest profile of Hertz's backers, Carl Icahn, who owns nearly 40% of Hertz's shares, "is expected to lose his entire roughly $1.5 billion investment." Any loss that Mr. Icahn can't avoid, smaller investors shouldn't expect to escape either. I fear that investors rushing in to scoop up Hertz shares at penny stock prices are going to be burned.

In the event you trust Dimon's prediction of a "fairly rapid recovery," I suspect you're better off investing in the company that's the most logical beneficiary of both that recovery and the Hertz bankruptcy now ongoing: Avis Budget Group. At just six times trailing earnings, Avis is clearly the better value stock.