In an environment of uncertainty, put your money into these healthy, long-term growers.

The market's rise in recent weeks seems a bit disconnected from reality, given high unemployment, unknowns about the future of the COVID-19 pandemic, and the uncertainty of an upcoming election. Stock bargains are harder to find than they were a couple of months ago, but one place to look is among small-capitalization stocks, which were hit along with everything else, but, as a whole, have been slower to rebound than the rest of the market. The Russell 200 Index, which is weighted to the small-cap universe, is still down 9% for the year, while the S&P 500 is down only 1% in 2020 and is only 6% below its all-time high.

Three small-cap stocks that have great prospects for the long term are Sonos (SONO 3.23%), AeroVironment (AVAV -2.17%), and Innovative Industrial Properties (IIPR -0.41%). Shares of smaller companies are often volatile, but for investors willing to ride out the tug-of-war between greed and fear, these companies have strong growth businesses that should pay off for their investors over time, and are good buys now. 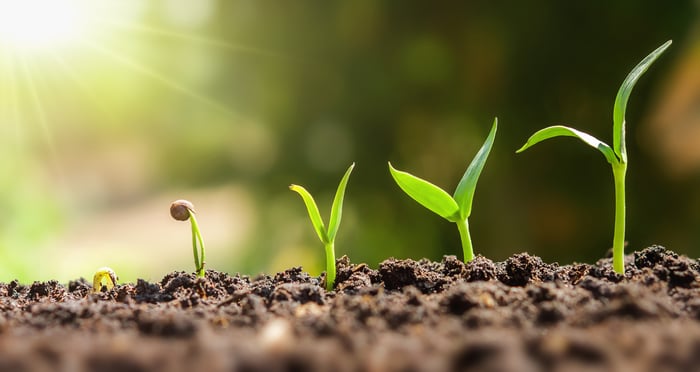 High-end sound system maker Sonos is having a tough year. Revenue in the first three months of 2020 fell 17% from the period a year earlier to $175 million as retail outlets for its products shut down over COVID-19. But the share price was falling even before the pandemic hit, with the company suffering a couple of self-inflicted wounds that alienated customers. China tariffs have also cost the company $26 million in the last six months, and the company is working to shift production to Malaysia.

There are still plenty of unknowns about consumer behavior as businesses start to reopen, but Sonos was doing fine just a few months ago. The company had a strong holiday season, with revenue growing 15% in constant currency in the quarter ending with December and gross profit margin that would have increased 4.6 percentage points without the effects of tariffs. Revenue in fiscal 2019 grew 13% excluding currency.

But even in the disappointing quarter just past, there were encouraging signs of recovery. Sales in April were down only 5% year-over-year after tumbling 23% in March. Home-bound consumers upgraded their sound systems with Sonos equipment by buying online, and the company's direct-to-consumer sales soared 400% from April last year.

Looking ahead, the company expects long-term annual revenue growth above 10%, and its investments in product development are paying off in a steady flow of new innovations. Sonos launched three new speaker products last month, is enjoying success from a battery-powered outdoor model it introduced last fall, and recently launched an ad-supported streaming radio service.

Sonos stock is selling for a price that's enticing if you believe the company will get back in the groove. The shares sell for 34% below its recent peak around the first of the year and 44% below the close on the first day of public trading after the company's initial public offering in August 2018.

AeroVironment is a leading supplier of drones to the U.S. military and its allies, but the company is also tapping into new sources of growth that could keep the stock flying for years.

The company's military business specializes in small unmanned aircraft systems that can be carried onto battlefields and launched by hand for the purposes of reconnaissance or attacking targets. Growth has been driven by increasing sales to non-U.S. governments and innovations such as the Switchblade tactical missile system, a robotic missile weighing less than 6 pounds that can linger over an area for 15 minutes or fly 10 kilometers before destroying a target.

The company is seeing momentum in tactical missile systems, but what has investors excited is the company's investments in what are essentially cell towers in the stratosphere. The company has a joint venture with Softbank to build solar-powered drones that can cruise for months at a time at twice the altitude of commercial aircraft and deliver 5G connectivity over broad areas to bring broadband to remote places and support the Internet of Things. Last quarter, contract payments for the development of this high-altitude platform station (HAPS) system was 19% of revenue and earlier this year, a HAPS Alliance was formed with companies such as AT&T, T-Mobile US, China Telecom, Deutsche Telekom AG, and Loon, a spin-off from Google parent Alphabet.

That opportunity is still in early days, but the company is also seeing increasing demand for current products as it expands internationally, creates new variants of its products, and pushes into commercial applications for drones. The company recently increased guidance for fiscal 2020, saying it expects 15% top-line growth and a 20% increase in adjusted earnings per share.

Shares of AeroVironment are hitting new highs lately, but with the business firing on all cylinders, that trend will likely continue.

Cannabis stocks have been hammered in the last year as an industry that got investors pretty excited in 2018 didn't deliver much in the way of results. The pandemic hasn't helped matters much, despite the fact that the supply chain for medical cannabis was designated essential in most states where it's legal. Stocks in the industry plunged in early March along with almost everything else.

Innovative Industrial Properties (IIP) doesn't produce marijuana or any product related to the stuff, but it owns facilities for cultivation of medical-use cannabis and leases them to licensed growers in the U.S. These growers typically have a tough time raising capital to buy real estate or to build greenhouses that require expensive climate control and security systems. IIP is structured as a real estate investment trust (REIT) and meets this critical need for the industry by acquiring these facilities and leasing them to licensed producers.

Despite chaos in the industry, IIP has been growing like a weed. In the quarter ended March 31, revenue increased 210% from the period a year earlier and net income grew 249%. The company owns 55 properties in 15 states totaling 4.1 million rentable square feet, after having added 16 new properties and over a million square feet just since the beginning of this year. IIP said in its recent conference call that it's seeing continued demand for deals and its pipeline of future acquisitions is "very strong right now."

The pandemic raised concerns that IIP would have problems collecting rent from tenants, but the impact of the downturn actually was far less than what some other commercial property REITs have been experiencing. The company extended rent deferrals to three of its 21 tenants for a total of $2.3 million, only 3% of the quarter's revenue.

IIP has a generous dividend that yields 4.4% at today's stock price, but the reason to buy the stock is for the tremendous growth of the business. The share price gets buffeted when sentiment about marijuana stocks falls, despite the durable nature of its income stream and a rock-solid balance sheet. That volatility might make the stock unattractive to some conservative investors, but it's the reason why the stock is available now at a 33% discount to its 365-day high, a strong buy for stock buyers with patience.