Please ensure Javascript is enabled for purposes of website accessibility
Log In Help Join The Motley Fool
Free Article Join Over 1 Million Premium Members And Get More In-Depth Stock Guidance and Research
By John Rosevear – Jun 9, 2020 at 6:00AM

The automaker is on the road to recovery.

Shares of Ford Motor Company (F -2.35%) recovered some lost ground in May, as the company restarted many of its idled factories and confirmed that it has several important new products coming soon.

After a rough start to 2020, Ford's shares rose 12.2% in May, according to data provided by S&P Global Market Intelligence. 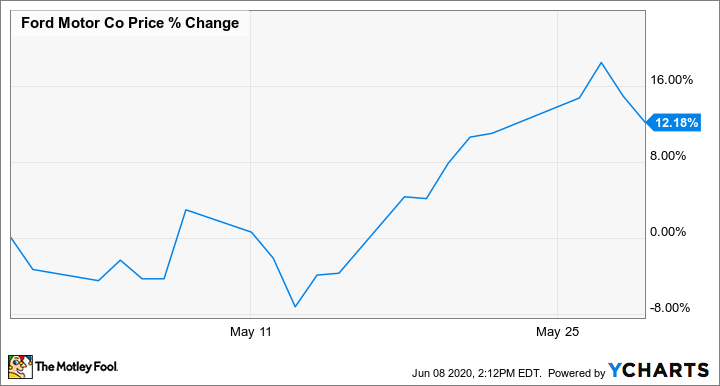 Ford's stock had been clobbered earlier in the year when the company was forced to shut down its factories in Europe, North America, and elsewhere in response to the COVID-19 pandemic. Like most automakers, Ford books revenue when vehicles are shipped to dealers. With its factories idled, it was burning cash at a sobering rate.

Auto investors got some reassurance in April when Ford said that it had ample cash to last through the end of the year. But there was some genuine good news in May. After extensive preparations to help protect workers from the COVID-19 virus, Ford restarted most of its factories in the U.S. and Canada on May 18. Image source: Ford Motor Company.

First, we learned that Ford's sales in China are on the rebound as that country recovers from the pandemic. On May 7, Ford's Chinese joint-venture partners reported that sales were up significantly in April.

The stock jumped again on May 18, when the restart of most of its factories in the U.S. and Canada appeared to go smoothly. Two more factories, in Michigan and Ontario, restarted a week later.

The stock rose in May on signs that the company is recovering from the virus-induced disruptions. Now that its factories are back up and running, Ford is looking ahead to a slew of new-product launches. It will reveal its all-new F-150 pickup in an online event later this month, and the much-anticipated Bronco SUV early in July.