Please ensure Javascript is enabled for purposes of website accessibility
Log In Help Join The Motley Fool
Free Article Join Over 1 Million Premium Members And Get More In-Depth Stock Guidance and Research
By John Ballard – Jun 11, 2020 at 6:42AM

There are several reasons to stick with the smaller athletic wear brand if you're looking for growth.

Nike (NKE -1.55%) has delivered market-smashing returns to investors with the stock up almost 500% over the last 10 years. It's the most valuable apparel brand in the world, according to Brand Finance, ranking ahead of even top luxury labels.

But lululemon athletica (LULU -4.28%) has built a dominant brand of its own by focusing on niche categories like yoga, running, and even apparel suitable for everyday wear. Shares of the athleisure specialist have outperformed Nike no matter what period you consider: year to date, one year, three years, or the past decade.

And here's why Lululemon should continue to be the better growth stock than Nike. 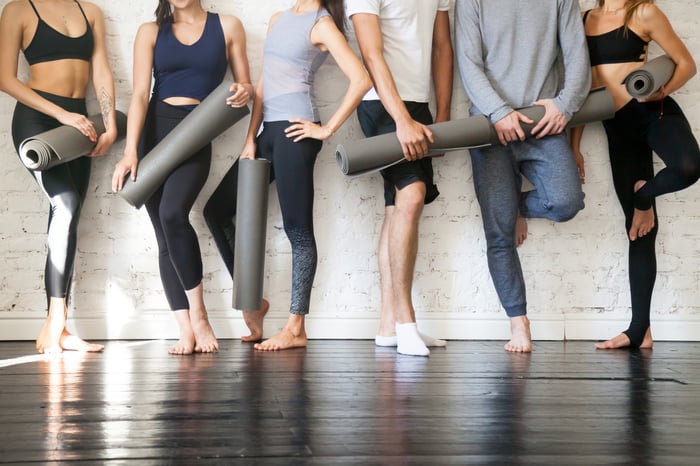 One advantage Lululemon has over its top rival is that more than 90% of its revenue is generated from company-operated stores or direct-to-consumer channels, including sales through its website or mobile app. This allows Lululemon to tightly control pricing and brand positioning, since its products are not sitting on the shelves in another company's store next to competing products.

On the other hand, Nike relies heavily on wholesale accounts to move inventory. Sales to wholesale customers make up approximately two-thirds of of the company's revenue. Another difference between the two is that Nike generates over 60% of its revenue from footwear, with apparel making up the remaining third, while Lululemon is exclusively focused on apparel (and accessories) right now.

All in all, Lululemon has consistently generated a gross margin above 50%, while Nike's gross margin has remained in the mid-40s range. 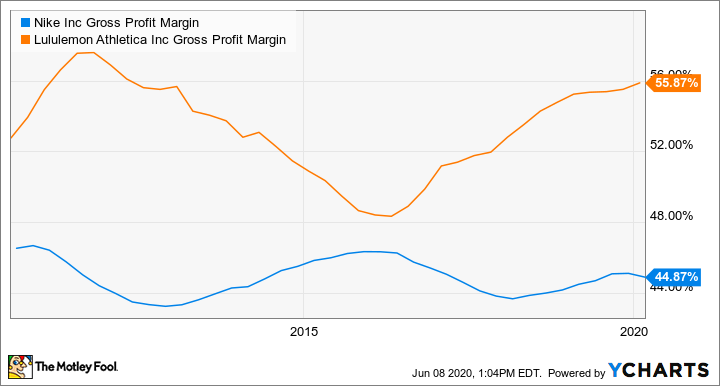 Lululemon will report its fiscal first-quarter earnings on Thursday, June 11, but if its bigger rival's recent quarter is any indication, Lululemon should report strong growth in its direct-to-consumer business.

In Nike's most recent quarter ending in February, digital revenue increased 36% as many stores were closed in China due to COVID-19. Nike saw increased engagement with its Nike Training Club app that spilled over to its e-commerce business. Digital is the company's fastest-growing channel and makes up over 20% of the top line, including sales through company-owned and retail partner digital channels.

But Lululemon is in a better position than Nike to benefit from the shift to digital. E-commerce revenue comprised 33.2% of its business heading into the COVID-19 crisis.

Analysts expect Nike to report a sales decrease of 23% year over year for its fiscal fourth quarter ending in May, while the current consensus estimate calls for Lululemon to see a 10% decrease in sales when it reports Thursday.

Lululemon's business is growing at a faster rate, fueling its superior stock performance.

Prior to the COVID-19 outbreak, Nike's revenue and earnings increased by 10% and 35%, respectively, in the fiscal second quarter, which ended in November. Earnings got a boost from a lower tax rate and share repurchases. At the time, management called for earnings growth in the mid-teens range through fiscal 2023.

The company should grow revenue and earnings faster over the next decade because it has the benefit of expanding from a smaller revenue base. Nike is a giant apparel business with $41 billion in revenue in the trailing 12-month period, whereas Lululemon's revenue was just shy of $4 billion.

Analysts currently expect Lululemon to grow earnings by 16.5% on an annualized basis over the next five years, compared to 11.7% for Nike.

This isn't taking anything away from Nike -- a great business with an incredibly strong brand and a knack for marketing. But in some ways, investing in Lululemon is like buying a smaller version of Nike. Who wouldn't want the chance to do that?

Lululemon reported $2.06 billion in revenue for fiscal 2015 (which ended Jan. 31, 2016) and reached $3.98 billion in four years. It looks like Lululemon is actually growing somewhat faster than Nike did at the equivalent level of sales.

I'm not sure Lululemon will outperform Nike in the market in the short term, given its sky-high valuation of 73 times forward earnings estimates. Nike's forward PE is closer to half that -- 43 at the time of this writing. But leaving valuation concerns aside, Lululemon should generate a much higher return for growth investors over time. Still, I might wait for a better price before pulling the trigger.