Please ensure Javascript is enabled for purposes of website accessibility
Log In Help Join The Motley Fool
Free Article Join Over 1 Million Premium Members And Get More In-Depth Stock Guidance and Research
By John Bromels – Updated Jun 15, 2020 at 9:37AM

If you like high-risk stocks with the potential for a big payout, check out these top picks.

Penny stocks -- stocks that you can grab for less than $1 per share, usually in very small companies -- are like lottery tickets for investors. They're cheap and easy to find, but they seldom result in the big payout they seem to promise.

But don't despair. Instead of spending your nest egg on penny stocks -- or, worse, actual scratch-off tickets -- there are plenty of companies that are fairly well-established and offer better prospects for investors. While they still have some risks, three companies you might want to consider are Clean Energy Fuels (CLNE 2.56%), Stag Industrial (STAG 0.69%), and Upwork (UPWK 6.83%).

Here's why these companies might help your portfolio hit the jackpot. 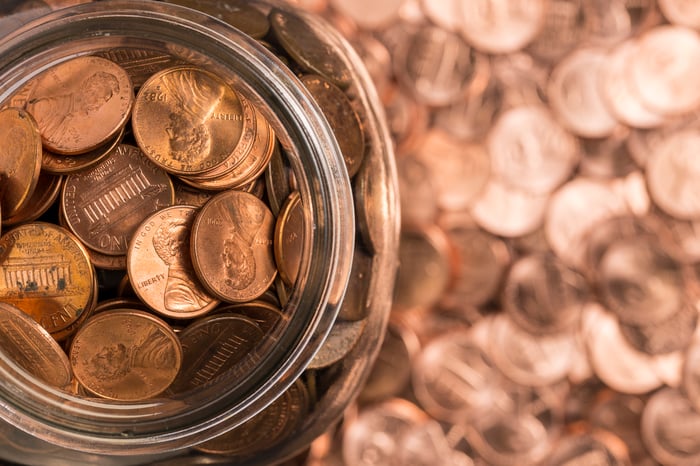 A bet on clean energy

Clean Energy Fuels has been a big loser over the last 10 years. Its stock price has fallen from more than $16 per share a decade ago to around $2.30 per share today. But there are some signs that the company may finally be on the cusp of outperformance.

Co-founded by billionaire and alternative energy advocate T. Boone Pickens, Clean Energy went public in 2007. Its goal is to create a market for natural gas transportation fuel that's cheaper and cleaner-burning than traditional petroleum fuel. In its early years, the company worked to open enough natural gas filling stations to create a coast-to-coast fueling network that would encourage truck fleets to switch to natural gas.

Clean Energy now operates 550 natural gas filling stations in the U.S. and has rolled out a hot new product called Redeem. Redeem is a fuel made from capturing methane emissions from dairies, landfills, and wastewater treatment plants. The fuel is cheaper than traditional diesel and burns 70% cleaner. It also keeps captured methane out of the atmosphere.

Sales of Redeem increased by 30% in 2019 as companies with big truck fleets looked for ways to reduce emissions. That trend seems likely to continue and may help finally power Clean Energy Fuels to stock market success.

A bet on e-commerce

The novel coronavirus shuttered traditional brick-and-mortar retailers across much of the country, pushing sales online. That resulted in big wins for e-commerce companies like Amazon and Shopify, shares of which have surged 43.3% and 87.1%, respectively, this year.

However, there's another bet you can make on e-commerce, and its share price has dropped 10.8% so far this year. Real estate investment trust (REIT) Stag Industrial buys industrial real estate like manufacturing plants, warehouses, and distribution centers. It then leases space to other companies. Currently, Stag owns 91.8 million square feet of space across 458 buildings in 38 states. Although the company has temporarily halted acquisitions, demand for warehouse and distribution space seems likely to increase as more companies and consumers turn to e-commerce.

There are some risks, of course. Stag's dividend growth has been anemic in recent years compared to some of its peers. It's also a fairly young company that went public in 2011, so it hasn't yet proven that it can weather an economic downturn. Still, if you're bullish on e-commerce, Stag is in the right place at the right time. 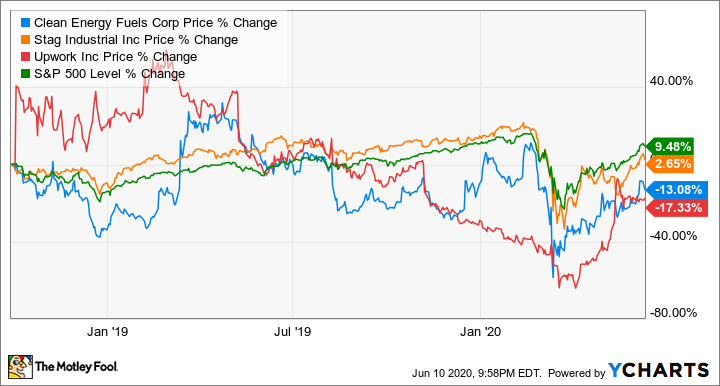 All three companies have underperformed the S&P 500 since Upwork's IPO in October 2018. CLNE data by YCharts.

A bet on the gig economy

Unlike Clean Energy Fuels and Stag Industrial, online freelancer marketplace Upwork has actually seen a 16% share price increase this year, climbing above $12 per share. However, the fledgling tech company's shares are still down more than 17% from its 2018 IPO.

Although the unemployment rate ostensibly fell in May, it was still above 13%. It's possible that it actually surpassed 16%. Some economists worry that many of the jobs lost to the coronavirus pandemic will take months or years to come back -- if they come back at all.

But that's an opportunity for Upwork, which allows companies and individuals to post jobs on its site and receive confidential bids from qualified freelancers and independent contractors. Upwork hosts a wide variety of postings in fields like accounting, law, technical writing, research, and graphic design. If laid-off workers are struggling to find a permanent position in their area of expertise, they may turn to freelance work in their chosen profession, or supplement a temporary job with additional "side hustles."

As a young company in a fast-moving industry, Upwork has some inherent risks. It's still not profitable, largely because it's putting a lot of money into marketing and research and development to grow its user base. But if you think the gig economy is poised to explode, Upwork is a logical place to invest.

These stocks are riskier than well-established ones that have demonstrated a consistent ability to turn a profit. However, they're a lot less risky than many penny stocks, which are usually so cheap for a reason. Better still, these stocks are in industries with high potential for rapid growth in coming years.

Investors who don't mind taking on some risk in exchange for high potential growth should consider Clean Energy Fuels, Stag Industrial, and Upwork, but if you buy in, you'll want to monitor them carefully to make sure things are going according to plan. Even stocks that aren't penny stocks can nosedive if their growth plans don't pan out.