Please ensure Javascript is enabled for purposes of website accessibility
Log In Help Join The Motley Fool
Free Article Join Over 1 Million Premium Members And Get More In-Depth Stock Guidance and Research
By Harsh Chauhan – Jun 22, 2020 at 9:08AM

The chipmaker is sitting on a big opportunity in data center chips, thanks to its commanding position in FPGAs.

Xilinx (XLNX) has rallied impressively over the past three months along with the broader market's recovery after the novel coronavirus-fueled correction rocked Wall Street in late February and March. But investors should not forget that the company had been facing challenges even before the coronavirus pandemic struck. 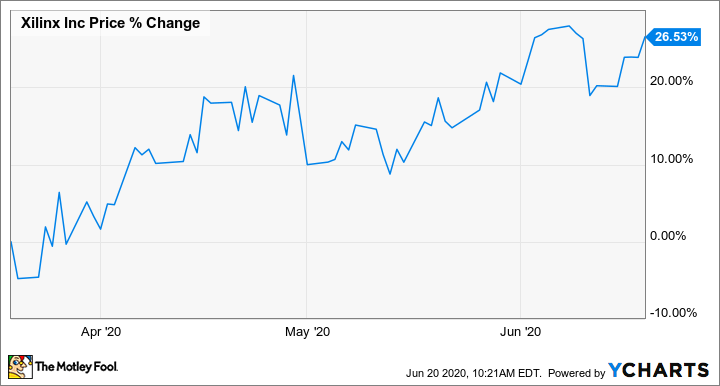 Xilinx had banked on 5G wireless deployments for most of 2019, but that catalyst started losing its wheels toward the end of the year. The disruptions caused by the pandemic have added to the company's woes, as evident from Xilinx's tepid fiscal fourth-quarter results released in April. However, there is a part of Xilinx's business that has received a nice shot in the arm during these difficult times, paving the way for long-term growth in a lucrative space.

The data center segment is currently a small part of Xilinx's overall business, accounting for just 10% of the company's fourth-quarter overall revenue of $756 million. But it is worth noting that the company's data center revenue shot up an impressive 77% year over year last quarter, due to an uptick in demand from cloud and high-performance computing solutions.

The chipmaker was getting just 5% of its revenue from this segment in the fourth quarter of fiscal 2019. So the data center division now enjoys greater clout at Xilinx. However, it won't be surprising to see the company get more revenue from this segment in the coming quarters, as demand for data center accelerators, such as the field-programmable gate arrays (FPGAs) that Xilinx deals in, could keep rising.

FPGAs are deployed in data centers to accelerate machine learning and artificial intelligence workloads, and they can be programmed by developers based on different requirements. This gives them an advantage over hard-coded central processing units (CPUs) that cannot be reprogrammed with changing requirements.

FPGAs also come in handy in case a data center is reaching its limits. Data-center operators are known to offload some of their workloads to FPGA accelerators to ease capacity constraints and improve cooling.

That's because FPGAs not only speed up certain data center workloads but also lower operating costs substantially through lower power consumption. For instance, Xilinx's FPGA rival Intel achieved a 50-times acceleration during a genome sequencing workload with the help of its Arria 10 FPGA chips as compared to its Xeon E5 server processors.

Not surprisingly, FPGAs are expected to generate the highest growth rate as compared to other data center accelerators, such as CPUs and GPUs (graphics processing units), according to a third-party report. The overall data center accelerator market is now expected to produce a nearly 50% compound annual growth rate through 2023 and hit a size of over $21 billion, which means that Xilinx's data center growth is just getting started.

Xilinx's data center business is still in its early stages of growth, as evident from the company's fourth-quarter numbers. But there's a huge opportunity in this space, and the chipmaker could quickly scale up in the future with its strong positioning in FPGAs.

Xilinx's share of the FPGA market is estimated at around 60%, with Intel occupying the rest. Xilinx has been taking steps to maintain its dominant position in this space by creating an ecosystem of data-center FPGAs with its adaptive computing chip Versal.

Based on a 7-nanometer manufacturing process, Xilinx claims that Versal is a fully programmable platform that can deliver 20-times performance gains over existing FPGAs and 100-times gains over CPUs in data center applications and other verticals such as 5G. The company says that more than 100 customers are currently engaged in the Versal early access program, and a few big names have already started deploying these chips.

In April, Samsung announced that it will be using Xilinx's Versal adaptive computing FPGAs in 5G deployments across the world because of the platform's flexibility and scalability. This win should boost confidence in Xilinx's product, paving the way for more contracts in the lucrative data center market that could ultimately help this semiconductor company get out of its current rut.