Please ensure Javascript is enabled for purposes of website accessibility
Log In Help Join The Motley Fool
Free Article Join Over 1 Million Premium Members And Get More In-Depth Stock Guidance and Research
By Maurie Backman – Jun 30, 2020 at 7:47AM

Americans are desperate for financial relief. A new proposal seeks to reimburse them for travel, which is far from helpful at a time like this.

Ever since COVID-19 became a domestic threat, Americans have been desperate for financial relief. An initial bout came when the CARES Act was passed in late March and brought a one-time $1,200 stimulus payment with it. Millions of Americans have already received that cash, and many have undoubtedly spent it already. But seeing as how the economy is still in a recession and the pandemic is by no means under control, it's clear that the public needs additional relief -- namely, a follow-up stimulus check.

Lawmakers are divided in that regard, though. While Democrats are pushing for a second stimulus round that's even more generous than the first for some households, Republicans are pushing back, stating that there's no need for a stimulus now that the economy is in the process of opening back up. In fact, the Democrat-introduced HEROES Act, which calls for a follow-up stimulus, is stalled in the Senate and unlikely to get passed in its current state. 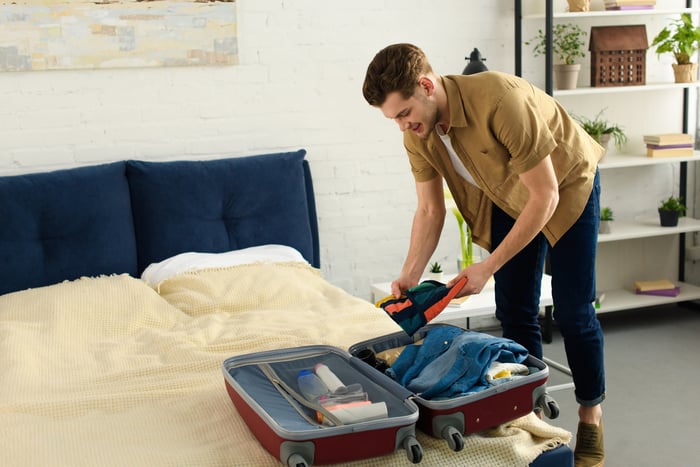 Still, lawmakers haven't given up on the idea of providing relief, and a new proposal seeks to reward Americans to the tune of up to $8,000 a year. There's just one problem: It requires Americans to spend money in order to get money, and right now, that's just not on the table for a large number of people.

Will Americans get paid to travel?

Republican Senator Martha McSally recently introduced the American Tax Rebate and Incentive Program Act, or American TRIP Act, which seeks to provide Americans with a yearly tax credit of up to $8,000 for couples filing jointly, or up to $4,000 for single tax filers, as well as an additional $500 per child. The credit would be in play for the 2020, 2021, and 2022 tax years.

Those who travel within the U.S. and its territories can claim expenses that include:

Furthermore, the tax credit would apply to trips taken between December 31, 2019, and January 1, 2022. That means anyone who traveled right before the pandemic could get a tax break for it.

As a reminder, a tax credit is a dollar-for-dollar reduction of a person's tax liability. A tax-filer who owes the IRS $8,000 but then scores an $8,000 tax credit winds up paying the agency nothing. Most tax credits are non-refundable, which means the most they can do is reduce a filer's personal liability to $0. If passed, the American TRIP Act is non-refundable as well.

Will the American TRIP Act go through?

The American TRIP Act isn't the first proposal that's been introduced lately to reward people for domestic travel. The Explore America Tax Credit also offers up to a $4,000 credit for that purpose. But while both proposals may be well-intentioned -- their goal is to stimulate the U.S. economy and create jobs in the hard-hit travel industry -- they also largely miss the point of a stimulus relief package.

Right now, millions of Americans are struggling financially, and so asking them to spend money on travel is almost laughable given the number of people who can't even keep up with their mortgage or rent. Furthermore, a tax credit, by nature, doesn't get paid right away. Someone incurring travel expenses for 2020 would not get any money back until 2021, when 2020's tax return is filed. And let's not gloss over the fact that travel is questionable right now, what with so many states reporting an uptick in COVID-19 cases.

As such, while some people might really benefit from a tax credit that rewards them for travel, it's clear that what the public needs more is an actual stimulus payment similar to the $1,200 checks that went out under the CARES Act. Lawmakers will likely continue to debate the need for a follow-up stimulus in the coming weeks, but with any luck, they'll come to an agreement that puts more money into Americans' pockets.