If you're scratching your head trying to figure out why AT&T (T 0.90%) just made its struggling DirecTV service even less marketable by raising its price, you're not alone. While inflation is a reality that companies and consumers alike must face, let's face it -- the move doesn't help the cause. The cost of the satellite-delivered cable TV service compared to its alternatives is a key reason DirecTV customers have been cutting the (proverbial) cord en masse for a few years now.

And that's why this price increase is apt to accelerate the demise of DirecTV as we know it. The decision will improve net margins as a percentage of revenue but will almost certainly whittle down this business unit's total bottom line. 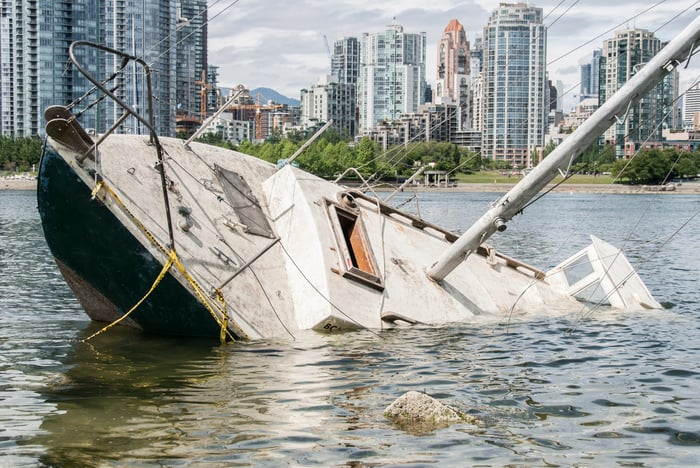 It's not exactly the sort of thing a company earnestly touts of its services, but it didn't go unnoticed. Each of the satellite cable player's core packages will now cost newcomers $10 more per month than they did just a few days ago. The more conventional streaming cable service AT&T TV is also now priced $10 more per month for new subscribers. Existing customers aren't suffering the same price hike, though existing customers also pay much more than the lower first-year introductory rate that compels consumers to sign on in the first place. Those existing customers are still paying for comparable price hikes put into place at the beginning of this year.

The superficial logic of the move makes enough sense. The company lamented -- and not for the first time -- that the 897,000 premium television customers it lost during Q1 were "due to competition and customers rolling off promotional discounts." Like its TV rival Comcast (CMCSA 1.74%), AT&T will continue to "focus on adding higher-value customers" going forward. That's why AT&T should start to see improved profit margin percentages for its flagship television business.

Where the decision to increase any prices at all is misguided, however, is in the apparent assumption that existing DirecTV customers are willing to continue paying steep monthly prices for their service. They're not.

The graphic below puts the matter in perspective by illustrating AT&T's historical cable television customer headcount compared to its historical over-the-top (streaming) headcount. The former, which is primarily DirecTV, has been losing customers since 2016. The company's streaming alternative got some traction after it debuted that same year but peaked in 2018 and has been quickly losing ground ever since. It now serves less than half of the number of subscribers it hosted in late 2018. 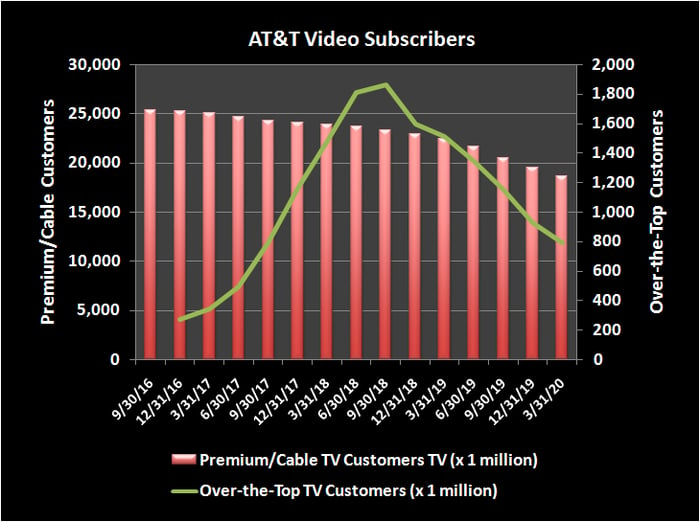 The trend is noteworthy simply because it suggests years of cheaper pricing for new customers still hasn't been enough to offset the net loss of cable TV customers who were no longer enjoying their promotional price. Now with even fewer new users likely to sign up due to higher costs, the net subscriber loss is likely to accelerate.

Perhaps it's by design. That is to say, the price increase AT&T has to know will crimp new TV subscriber flow marks the beginning of a move to willfully shrink the DirecTV brand to something that's much smaller than its current size, but something that's at least reliably capable of adding to the bottom line. Comcast is moving in the same philosophical direction. As CFO Mike Cavanagh noted during the company's fourth-quarter conference call earlier this year: "We expect higher video subscriber losses this year," nodding back to his comment "we will not chase unprofitable video subs" made during another conference call held in 2019.

In short, the cable industry is finally drawing a line in the sand, choosing the bottom line over the top line if it has to make that choice -- which it does.

AT&T shareholders would be wise to acknowledge Cavanagh's warning, though. This decision will likely lead to lots more customer attrition, on a net basis. The question is, how small does AT&T's cable business need to become before it's properly right-sized? The bottom doesn't appear to be anywhere in sight.

Most interesting (and alarming) about the price increase is that it may inflict enough damage on DirecTV to make it unmarketable to a potential suitor. Whispers of a sale of AT&T's satellite television business have been circulating for some time now. But if that was or still is the plan, a bigger active customer base is better. The smaller that paying customer base is, the less AT&T will fetch for the brand in the open market.

No matter how you slice it, the timing of this move is terrible. This price hike decision appears to do more damage than good.