Are there any reasons to buy this food delivery stock ahead of its merger with Just Eat Takeaway next year?

Grubhub (GRUB) took investors on a roller-coaster ride after its IPO in April 2014. The food delivery company went public at $26 per share, and its stock had surged to nearly $150 by late 2018. However, intense competition, surging expenses, and the COVID-19 crisis caused Grubhub to drop back to the low $30s earlier this year.

But Grubhub's stock rebounded to the high $60s last month after the company agreed to an all-stock merger with its European peer Just Eat Takeaway (JTKWY 3.90%), which itself was only recently formed by a merger between the UK's Just Eat and Netherlands-based Takeaway.

For many investors, the $7.3 billion deal represented an opportunity to sell Grubhub. However, Grubhub's stock is currently trading at a slight discount to Just Eat's offer, and Grubhub's shares will be converted to Just Eat's after the deal closes in the first quarter of 2021. Does this gap suggest Grubhub's stock still has upside potential for new buyers? 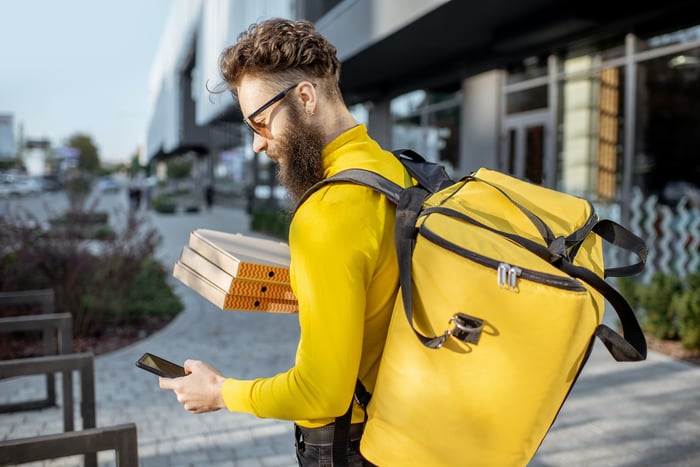 Is Grubhub an arbitrage play?

Grubhub agreed to exchange each of its shares for 0.671 shares of Just Eat Takeaway. That offer implied a value of $75.15 per Grubhub share when the deal was announced on June 10.

However, Just Eat's stock declined after the announcement, presumably because investors thought the food delivery giant was biting off more than it could chew. As of July 1, 0.671 shares of Just Eat Takeaway were only worth about $70.18 -- roughly a dollar above Grubhub's closing price that day.

That's not a meaningful arbitrage opportunity and suggests Grubhub's stock will simply track Just Eat's until the deal closes. Therefore, the real question isn't about Grubhub -- it's whether or not Just Eat Takeaway's stock is worth owning. 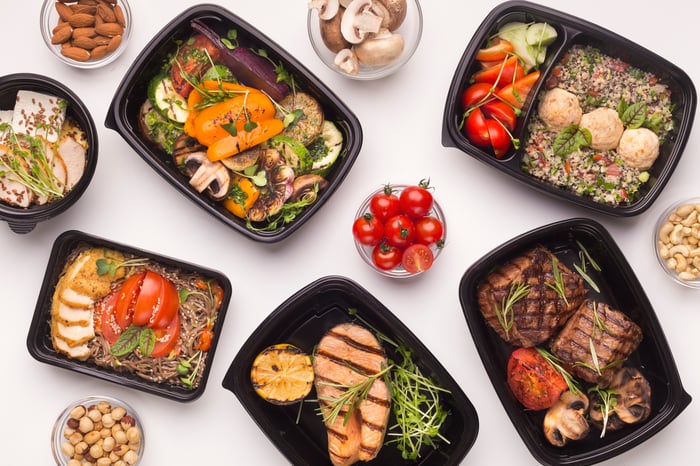 Grubhub generates most of its revenue from the United States, and Just Eat Takeaway mainly serves Europe, with a foothold in Canada. The combined company will become the largest food delivery company outside of China.

However, Grubhub's adjusted EBITDA declined 20% in 2019 as it aggressively ramped up its spending to counter DoorDash and Uber (UBER 3.78%) Eats. Just Eat's adjusted EBITDA also fell 16% year-over-year in the first half of 2019, but Takeaway posted its first full-year adjusted EBITDA profit last year.

Just Eat Takeaway claims merging these three businesses will create "one of the few profitable players in the space" by scaling up operations, eliminating redundancies, and increasing pricing power. It would reduce Grubhub's dependence on the U.S. market, where it was dethroned by DoorDash last year, and avoid the antitrust scrutiny of a merger with Uber -- which was seriously considered prior to the Just Eat deal.

Just Eat Takeaway currently has an enterprise value of about $6.6 billion, which gives it a trailing EV/revenue ratio of 3.9. Grubhub, which also has an enterprise value of $6.6 billion, trades at 5.1 times last year's revenue. Therefore, the combined group should have an EV/Revenue ratio of just over 4 -- which isn't too expensive for a combination of three companies that are still generating double-digit sales growth.

However, the pressing concern is the group's ability to remain profitable. Grubhub, like its peers, is struggling to generate stable profits between its high fees and low wages, and it's unclear if consolidating the market will solve those issues -- or simply create a bigger target for complaints and regulatory actions.

I previously stated I would keep my Grubhub shares and trade them in for Just Eat Takeaway's, but that's only because my original investment in Grubhub is underwater. But for now, I can't recommend Grubhub as an arbitrage play, and investors who are interested in Just Eat Takeaway should wait for the deal to close next year to see if it's a worthwhile investment.