Shares of many insurance companies fell by double-digit percentages in the first six months of 2020, according to data provided by S&P Global Market Intelligence.

The pain was felt across the industry. Shares of Allstate (NYSE:ALL), which primarily sells auto and homeowners insurance, were down 13.8% in the first half of the year. Specialty insurer Markel (NYSE:MKL) saw its shares tumble 19.2%. Supplemental insurer Aflac's (NYSE:AFL) shares were clobbered, falling 31.9%, while general insurers Chubb (NYSE:CB) and MetLife (NYSE:MET) plunged 18.7% and 28.4%, respectively. 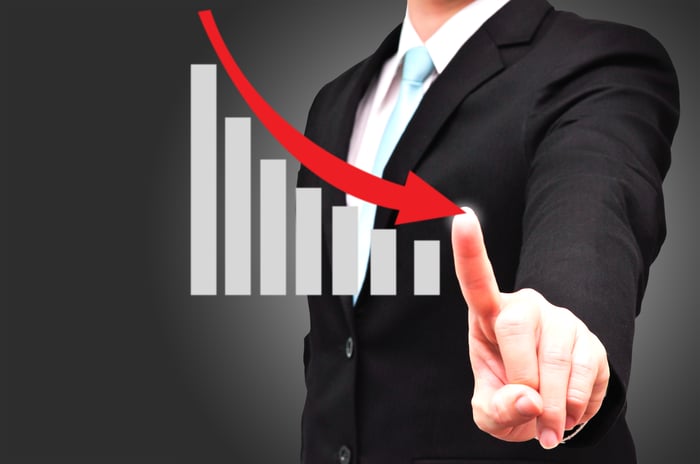 In the midst of a pandemic, it's natural for investors to have doubts about insurers, especially health insurance and life insurance companies. Sure enough, in late February, Aflac and MetLife -- for which health and life insurance represent large portions of their operations -- were already underperforming the S&P 500, as concerns rose that COVID-19 might lead to substantially more payouts.

When U.S. states began to shut down due to the coronavirus pandemic in late March, reinsurers -- companies that offer insurance to other insurance companies -- including Chubb and Markel underperformed the overall insurance market, as investors got nervous about the potential liabilities of the insurance industry as a whole.

In addition, Chubb sells business interruption insurance, and the market questioned whether it and other such insurers might have to pay businesses that were closed due to the pandemic. The answer, incidentally, is "probably not": Most business-interruption insurance requires some sort of physical damage to apply. However, that hasn't stopped a group of Chubb's clients from suing the company, claiming that viruses damage the surfaces they touch and thus pandemic-related business closures should qualify.

About the only bright spot in the insurance industry was auto insurance: Because people were stuck at home, there were fewer auto accident claims in March and April for insurers to pay. That's probably why Allstate, which has a large auto insurance business, outperformed the other companies: 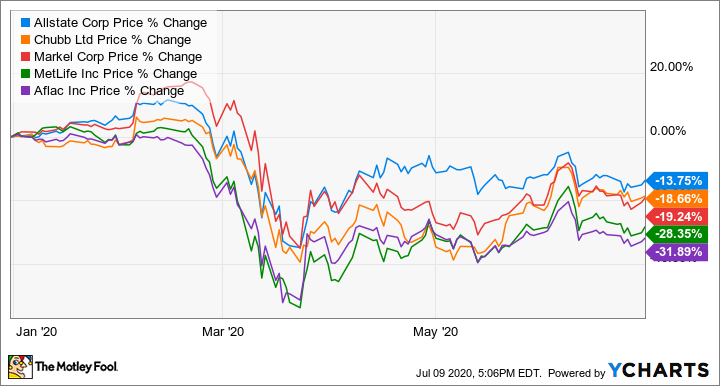 ALL data by YCharts.

However, auto insurers were worried that people might cancel their car insurance while stuck at home, so many offered a partial rebate on premiums. Allstate called its rebate program the "Shelter-in-Place Payback," and recorded a $210 million expense associated with the program in the first quarter of 2020. Even with that expense, Allstate still seems to have come out ahead, generating $1.35 billion in underwriting income for the quarter.

But while all of these factors played a role in the insurance industry's poor performance during the first half of 2020, one of the primary reasons for the underperformance wasn't even related to insurance at all: interest rates.

Generally speaking, insurance companies collect premiums from their customers, and then turn around and invest that money. Because insurance companies need to stay well-capitalized, they usually invest the bulk of their money in stable assets, primarily high-grade bonds like U.S. Treasury notes. These investments are often responsible for a big chunk of the company's profits, so when interest rates and bond yields are low, insurance companies tend to underperform.

In the first half of March, the Fed made two big cuts to the target federal funds rate, slicing it to near zero. As a result, the yield on the benchmark 10-year U.S. Treasury note fell from 1.5% in mid-February to just 0.7% at the end of March. That was bad for insurance companies in need of fixed-income investments, and the market reacted accordingly.

As long as interest rates and bond yields stay low, insurance companies' stocks are unlikely to recover. And with COVID-19 on the rise in most U.S. states, there are still concerns about how health and life insurance companies will be affected. It's worth noting that both Aflac and MetLife beat expectations for Q1 2020 earnings, but there's no guarantee they'll continue to do so, especially if COVID-19 cases continue to mount.

Because insurance company stocks haven't recovered as quickly as the rest of the market, it may be a good opportunity to pick up shares of specialty insurer Markel, sometimes referred to as a "Baby Berkshire Hathaway" because of its willingness to invest its excess cash in a diversified portfolio of stocks and businesses.

Otherwise, investors should probably wait to invest in this sector until we have more clarity on the trajectory of the pandemic and its economic fallout.