There is an obvious winner between these two stocks.

The semiconductor sector has outperformed the broader stock market so far this year, as demand for chips remains strong amid the economic damage done by the coronavirus pandemic. Not surprisingly, chipmakers such as Advanced Micro Devices (AMD 1.77%) have stepped on the gas and delivered impressive gains so far in 2020. At the same time, other companies, such as memory and storage company Micron Technology (MU 0.83%), have disappointed investors, despite the favorable environment prevailing in the semiconductor industry. 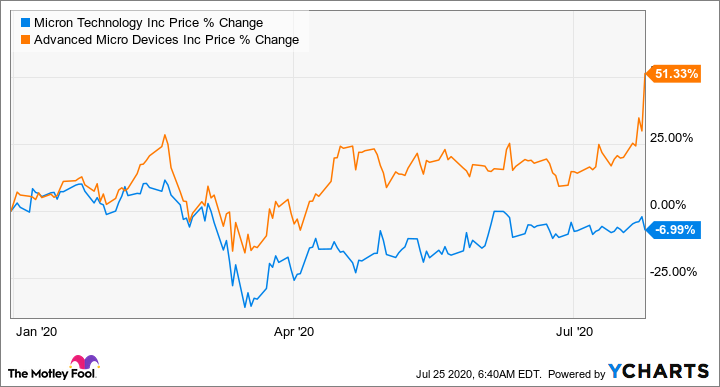 While AMD has benefited from an increase in demand for graphics cards, computer processors, and server chips, Micron has been contending with uncertainty in the memory industry, which was struggling due to oversupply before the pandemic arrived. So does this mean that investors should dump Micron Technology shares to go long on AMD?

AMD has witnessed strength across the board in recent months. People staying home to contain the spread of COVID-19 have been buying computers and gaming hardware to work remotely and keep themselves entertained. At the same time, data center operators have been busy expanding their capabilities to support the boom in data traffic, as shelter-in-place orders and lockdowns have led to an increase in consumption of video content, online gaming, and video conferencing.

The above-mentioned tailwinds are positively impacting AMD's financial performance, as evident from the company's 2020 guidance. The chipmaker said in April that it anticipates revenue growth between 20% and 30% this year. This would be commendable, considering that more than half of the companies in the S&P 500 have either slashed or withdrawn their 2020 guidance on account of coronavirus-related uncertainties.

More importantly, AMD looks quite capable of reaching its targets. The company could dominate the laptop market this year as OEMs (original equipment manufacturers) are expected to launch 100 new models based on AMD's latest Ryzen 4000 chips. AMD stock surged last week when rival Intel announced it would postpone launching its 7-nanometer chips for at least six months.

According to data from Mercury Research, AMD controlled 16.2% of the laptop processor market in the fourth quarter of 2019. That was a nice jump of four percentage points from the prior-year period. Other estimates suggest that AMD may have cornered 20% of the laptop market share in the first quarter of 2020.

The global laptop market is expected to grow at an annual pace of 1% through 2024, according to TechNavio. While that doesn't look very attractive, one should remember that AMD can capture more share from Intel -- something that it has done successfully so far.

Another factor that could drive the growth of AMD's computing and graphics business is the launch of a new generation of Ryzen processors later this year that are expected to be 20% faster than the current ones. Throw in additional catalysts from the gaming, console, and server businesses, and it shouldn't be very difficult for AMD to end 2020 on a high.

Micron Technology's outstanding fiscal third-quarter report last month put any concerns to rest about the novel coronavirus pandemic hurting its business. More importantly, the company is looking at 23% annual revenue growth this quarter, an acceleration over the 14% year-over-year growth it recorded last quarter.

There are two factors that have helped Micron stage this impressive comeback: an uptick in memory demand and improved pricing. In the third quarter, Micron's DRAM (dynamic random access memory) shipments were up 10% sequentially, while average selling prices (ASPs) increased in the mid-single digits. Shipments of NAND flash also increased in the lower single digits quarter over quarter, while ASPs were up in the upper single digits.

Memory chips should continue to be in good demand thanks to catalysts such as data centers, smartphones, and gaming consoles. At the same time, investors need to keep an eye on the supply side as well. An oversupply in the industry sent prices crashing after two solid years in 2017 and 2018, and there are a few ominous signs already that investors need to worry about.

According to data from DRAMeXchange, the price of an 8GB DDR4 DRAM in June stood at $3.31 -- the same as in May. The prices rose consistently from December 2019 until May, indicating that the price gains Micron has been enjoying so far may have come to a halt. The report also points out that spot DRAM prices have dropped 17% over the past three months, and they are expected to drop in the ongoing quarter as well.

Both server and PC DRAM prices are expected to lose momentum as buyers are reportedly holding back purchases in anticipation of a drop in prices. So Micron Technology may have delivered a terrific quarterly report and guidance last month, but the uncertainty around memory prices could play spoilsport.

While AMD has been on fire thanks to market share gains, Micron has spent the year getting back on its feet. This explains why AMD's stock market returns have been way better than Micron's in 2020.

But AMD's impressive run has made the stock expensive. Its price-to-earnings (P/E) ratio of 161 as of this writing doesn't scream value. Micron, on the other hand, trades at a much more acceptable P/E ratio of 25. However, the cheaper Micron Technology may not prove to be a prudent bet if memory prices lose steam.

AMD seems better placed as it has new product launches in the cards and new gaming consoles that could give it a nice lift. Investors will have to pay a premium, which seems justified as AMD has been a top growth stock this year.