Please ensure Javascript is enabled for purposes of website accessibility
Log In Help Join The Motley Fool
Free Article Join Over 1 Million Premium Members And Get More In-Depth Stock Guidance and Research
By John Bromels – Updated Jul 31, 2020 at 10:44AM

These top names have big problems.

Sometimes, those bets pay off. A lot of the time, though, they don't. 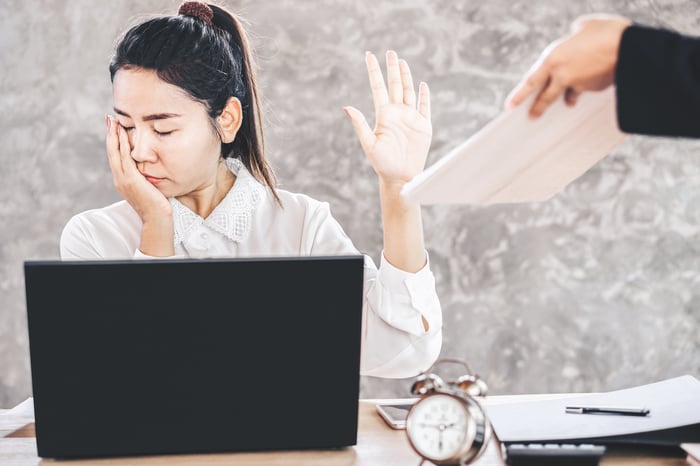 However, even if I thought oil was going to pull off a miraculous turnaround, offshore rig operator Transocean is still a stock I'd leave alone. Yes, even though its shares are down more than 70% this year and 95.6% over the last 10 years.

Offshore oil wells, Transocean's bread and butter, are expensive to drill. That's especially true for deepwater and ultra-deepwater wells, the most profitable kinds for Transocean. Now that most producers have slashed their 2020 capital spending budgets, there's likely to be even less demand for such services.

Even before March's oil price crash, Transocean was unprofitable. That doesn't seem likely to change. Meanwhile, Transocean has $9.2 billion in long-term debt on its balance sheet. That's more money than its past three years of revenue combined. Smart investors will steer clear.

In early June, shares of industrial conglomerate General Electric spiked almost 30%, from under $6.60 a share to nearly $8.50 a share. Today, it's sitting right around $6.60 a share again, near a 27-year low.

While that may seem like an incredibly cheap price for an iconic company, GE faces some incredibly tough challenges right now. It's sold off many of its business units -- including the high-margin biopharma business -- to pay down debt, and has slashed its quarterly dividend to just a penny a share. The market for some of its core industrial products like gas power turbines and hydroelectric components has collapsed. Meanwhile, its aviation unit -- formerly the standout of the General Electric portfolio -- has been hit hard, both by the grounding of the Boeing 737 MAX jet and the effects of the coronavirus pandemic on the airline industry.

There might be some upside to GE's shares... eventually. But without a significant dividend, there's no reason to buy in and wait for a turnaround that could be years away

The hottest of the hot

There's hot, and then there's Tesla-hot. Shares of the electric carmaker are up 560% over the past year. Yes, you read that correctly: up five hundred sixty percent in one year. With a stock price of about $1,500 per share, Elon Musk's rule-breaking company is now the biggest automaker in the world by market cap.

I think Tesla's stock is likely to go up from here. And yet I would never buy it at this price.

Here's the thing: Tesla's valuation is now completely divorced from reality. Its market cap has surpassed even Toyota's, and Toyota sold about 27 times the number of vehicles as Tesla did in 2019. Tesla's gross margin is expected to be slightly higher -- it's targeting a 25% gross margin, while Toyota's has ranged between 17% and 21% over the last five years -- but that hardly justifies such a lopsided valuation.

Right now, the thesis for buying Tesla is the same as for buying a work of art as an investment: a hunch that someone will pay more for it down the road. As I said, I actually think that's fairly likely to happen, because Tesla has a lot of hype behind it and a legion of adoring fans willing to throw money at Musk & Co.

If I had some money I wasn't concerned about losing, and a very high risk tolerance, I might try to exploit Tesla's volatility, buying after big drops and selling after big gains. But even if that were my strategy, I wouldn't buy after this big of a run-up in price.

In all three of these cases, conditions could change and make me reevaluate my theses. Tesla could quickly start ramping up production to unprecedented levels, General Electric's gas turbine market could suddenly come roaring back, and OPEC could commit to multi-year, binding production cuts that ensure high oil prices for the next decade and lucrative business opportunities for Transocean.

I don't think any of these are likely, but as always, I'll be keeping an eye out for these and other developments that could make me change my mind about these stocks. Until then, I'm steering clear, and most investors would be wise to do the same.