Please ensure Javascript is enabled for purposes of website accessibility
Log In Help Join The Motley Fool
Free Article Join Over 1 Million Premium Members And Get More In-Depth Stock Guidance and Research
By Brian Withers - Aug 15, 2020 at 8:30AM

A developer platform, a computer-aided design software company, and an e-commerce marketplace are three ways to invest in this growing trend.

Augmented reality (AR) became a mass-market phenomenon with Nintendo's Pokemon Go in 2016 as millions downloaded the app to search for virtual creatures in their neighborhoods. Besides being a fun activity, the game is a great example of what AR is and how it can be used in everyday life.

As the technology improves, applications for healthcare, engineering design, construction, retail, e-commerce, and other industries will grow. If you are interested in investing in this tech-forward trend, three companies that are set to benefit from AR are Apple (AAPL -0.44%), Etsy (ETSY -1.90%), and Autodesk (ADSK 0.41%).

Let's look at how each is playing into augmented reality and why these stocks should be part of your portfolio. 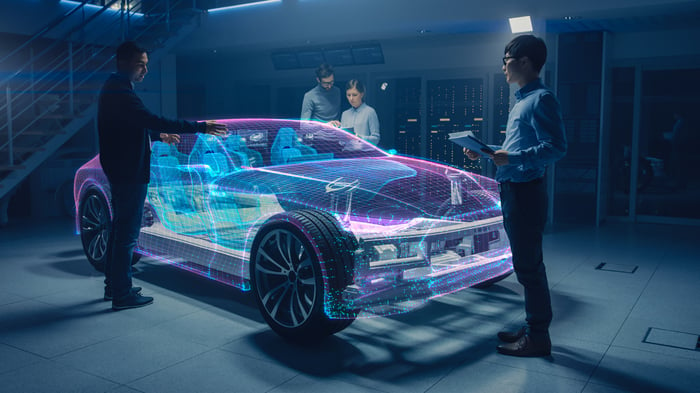 In 2017, Apple released its ARKit for software developers to enable the creation of augmented reality applications in its ecosystem. Since then it has grown into the "world's largest augmented-reality-enabled platform" with thousands of apps released for users. Its huge install base of more than 1.5 billion iPhones globally makes it attractive for its tens of millions of software developers to create new AR applications. Whether its an app that allows students to see inside the human body as it moves, a landscaping design visualization tool, or the Warby Parker app that shows you what your glasses look like on your face before you buy them, AR apps are becoming more mainstream.

Apple doesn't release specifics about its AR business, but its services segment, which includes its app store sales, is now growing faster than its hardware segment. Last quarter, services racked up $13.2 billion in revenue, a 15% year-over-year increase. Having augmented reality capabilities for developers and tight integration of its hardware and software gives the company a technological advantage over its rivals in the space. Add in the fact that CEO Tim Cook can't contain his excitement about AR and is placing "big bets" in the technology, and this becomes a solid AR buy for the long term.

Autodesk's flagship product, AutoCAD, is a computer-aided design (CAD) software package for architects, engineers, construction professionals, and even computer game designers. Its software has come a long way since it became the first CAD software to run on a PC in 1982. Today, its powerful cloud software utilizes augmented reality to enable a 3D design to be viewed at the job site, virtual reality to visualize a factory running before it's built, and mixed reality that allows designers to manipulate design models with their hands. These state-of-the-art technologies aren't just cool, they help shorten the time it takes to bring ideas to life, saving customers money.

Management estimates the market for its software at $52 billion annually today, growing to $69 billion by 2025. Its 2019 revenue of $3.3 billion is less than 5% of the 2025 market, giving it plenty of room to run. In June, management set business goals at its investor day for a compound annual growth rate of 16% to 18% over the next three years and $2.4 billion in free cash flow by the fiscal year 2023. The company is off to a solid start in its first quarter of 2021 (ending April 30, 2020), hitting 20% year-over-year top-line growth and $307 million in free cash flow. Management is confident that it can hit its targets even with the coronavirus uncertainties, making this tech stalwart a buy today.

Etsy hosts an online marketplace for artisans to sell handmade items to over 60 million active buyers and is utilizing tech to improve the experience for its customers. It's using artificial intelligence to provide "world-class" search capabilities and augmented reality to enable buyers to view any item in its paintings, photography, and prints category inside their homes. The 5 million wall coverings are a small subset of the 66 million items available, but the company said in a June blog post that this new feature is just the "first step in implementing augmented reality to create a more visual shopping experience."

Buyers are attracted to this marketplace because of the breadth of unique handcrafted items available. It makes sense for the company to embrace technology to give shoppers a more personal connection to the special goods it sells in support of its "keep commerce human" mission. This has been a winning formula for the brand as it blew by its first $2 billion quarter in gross merchandise sales (GMS), powering a record $429 million in sales in Q2. This sales milestone came only 10 quarters after its first $1 billion in gross merchandise sales.

Etsy will continue to lean on AR and other technologies to enhance its platform making this a great buying opportunity for this tech-focused, human-centered marketplace.

The reality for investors

Whether its Apple's powerful augmented reality software developer platform, the time-saving AR features of Autodesk, or Etsy's use of AR to bring artwork into your home, the future for this technology is exciting. Buying shares of one or all of these three tech-focused companies will enable you to profit along with this growing trend.