Please ensure Javascript is enabled for purposes of website accessibility
Log In Help Join The Motley Fool
Free Article Join Over 1 Million Premium Members And Get More In-Depth Stock Guidance and Research
By Matthew DiLallo – Aug 31, 2020 at 9:25AM

NextEra Energy Partners (NEP -1.51%) has been red-hot this year. Shares of the renewable energy producer and natural gas pipeline operator are up more than 15%, which is almost double the rise of the S&P 500.

That sizzling start might have some investors wondering if the company is too hot to handle these days. Here's a look at whether that's the case or if it has more market-beating upside ahead. 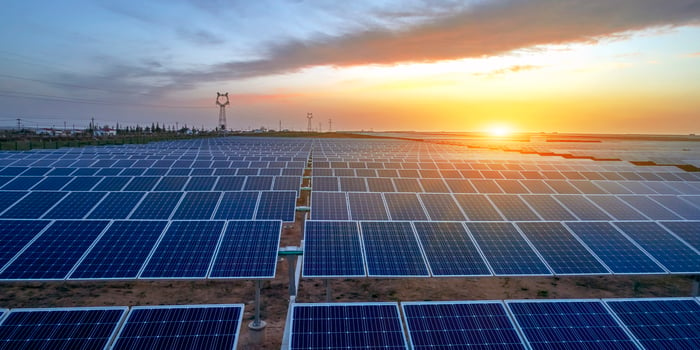 Too hot to handle?

After soaring this year, NextEra Energy Partners currently trades at a market capitalization of about $4 billion and an enterprise value (EV) of $12.4 billion. With the company expecting to generate $550 million to $640 million in cash available for distribution (CAFD) and $1.225 billion to $1.4 billion of adjusted EBITDA this year, it trades at about 6.7 times cash flow and an EV/EBITDA ratio of 9.5 at the midpoint of those ranges.

That's a more than reasonable price to pay for a dividend-focused renewable energy company (also known as a renewable yieldco). For example, fellow yieldco Clearway Energy (CWEN -1.06%) (CWEN -1.06%) currently expects to generate $1.54 per share in CAFD this year. With its stock recently trading at $26 a share, it sells for 16.9 times cash flow. Meanwhile, Brookfield Renewable (BEP 1.16%) (BEPC 1.24%) is on track to produce $2.50 per share of funds from operations. With shares recently trading around $47.50 apiece, it sells for about 19 times its cash flow.

NextEra Energy Partners trades at a cheaper price relative to its peers because of how it finances growth. The company has tapped the private capital market several times over the past few years using a tool known as convertible equity portfolio financing (CEPF). This funding structure has several advantages, including low pricing relative to debt. However, the company eventually needs to issue equity to buy out this financing, diluting existing investors. The market is pricing in some of this dilution, which is why it trades at a lower valuation compared to its peers.

NextEra Energy currently expects to generate enough CAFD to grow its dividend -- which currently yields 3.8% -- by 12% to 15% this year while maintaining a conservative dividend payout ratio of 70%. Meanwhile, it anticipates that it can increase its payout at that same rate next year without making any additional acquisitions. That's because it expects to steadily increase its dividend payout ratio up closer toward its peer group average in the 80% to 85% range.

NextEra Energy Partners believes it can continue increasing its dividend by that same rate through 2024. Driving that forecast is its view that it can make additional acquisitions. It has an enormous pipeline of potential opportunities thanks to its relationship with giant utility NextEra Energy (NEE -1.95%). That company currently has 14 gigawatts (GW) of wind and solar power projects in operation and another 13 GW under construction that it could sell to its affiliate in the future. That's an enormous opportunity set for NextEra Energy Partners, considering that it currently has 5.3 GW of renewable capacity. In addition, NextEra owns several gas pipelines that it could also drop down to its affiliate. Meanwhile, the company could also make third-party acquisitions, which it did last year when it bought Meade Pipeline.

While the company has no shortage of growth opportunities, there's some question about how it will finance this expansion. Given its plan to increase its dividend payout ratio, it's not retaining a lot of cash to help fund acquisitions. Meanwhile, it has a relatively high leverage ratio and junk-rated credit, limiting its ability to borrow money to finance growth. On the other hand, it does have a sizable amount of liquidity -- $648 million of cash and borrowing capacity on its credit facility -- and access to private capital via additional CEPF deals. As long as those private capital sources don't dry up, NextEra Energy Partners should have the funding needed to keep growing its cash flow and dividend at a high-powered pace over the next few years.

Despite its big run so far this year, NextEra Energy Partners still trades at a relatively cheap valuation even with all the embedded dilution it will eventually have to incur to buy out the CEPFs. Meanwhile, there's a lot more growth ahead as the company continues acquiring cash-flowing clean energy assets. The stock should have the power to continue its market-beating ways, as long as it can find attractive ways to finance those deals. That makes it an intriguing buy for income-focused investors willing to take on a bit more risk for this high-powered dividend growth stock.