The first week of September wasn't a good one for the stock market. Fears of a rerun of the March crash reared their ugly head toward the end of the week, and major indices pulled back after a strong run over the past few months.

Investors decided to dump high-flying names in a bid to book profits before things go further south, which is not surprising as according to historical trends, September is often a painful month for the stock market. But history tells us that buying stocks when the market is undergoing a correction could be a smart thing to do. That's why it would be a good idea for investors to keep an eye on NVIDIA (NASDAQ:NVDA) and Chewy (NYSE:CHWY) -- two stocks that have pulled back recently but have done well during the coronavirus-induced slowdown across the globe. 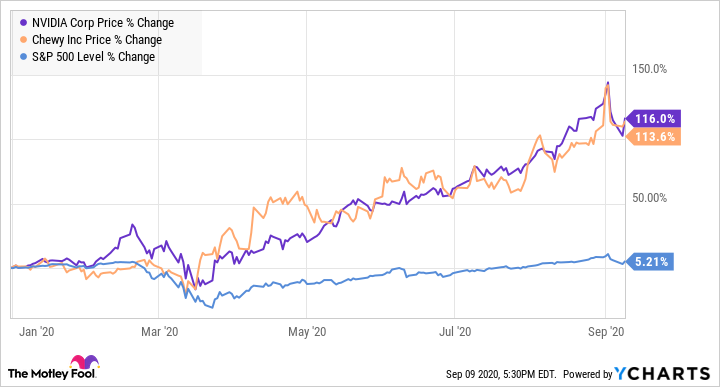 NVIDIA has gone from strength to strength this year, thanks to terrific demand for its graphics cards in the PC gaming and data center markets.

The company's top line jumped 50% year over year in the fiscal 2021 second quarter that ended on July 26. Gaming revenue was up 26% year over year to $1.65 billion, accounting for nearly 43% of the top line. The data center segment surged to the top with 167% growth (including revenue from Mellanox) to $1.75 billion.

NVIDIA is guiding for $4.40 billion in revenue this quarter, an increase of 46% over the prior-year period. More importantly, the graphics specialist should be able to sustain its momentum for a long time as its two key businesses are riding powerful tailwinds.

The company recently released its latest generation of graphics cards based on the Ampere architecture. The new RTX 30 series GPUs (graphics processing units) deliver significant performance gains at competitive price points. NVIDIA claims that they can "deliver up to 2x the performance and 1.9x the power efficiency" over the previous generation Turing cards, giving the company's installed user base a big reason to upgrade.

As it turns out, most NVIDIA users are currently using older generation graphics cards. The company had revealed last year that half of its installed base was using Pascal GPUs that were originally released in 2014. The Turing cards were only 2% of the total installed base, and 48% were using GPUs older than Pascal. So the new Ampere GPUs could trigger a huge upgrade cycle thanks to the promised performance gains and their pricing, paving the way for stronger growth in NVIDIA's gaming business.

Meanwhile, NVIDIA's data center business has room to run higher too. Its addressable opportunity in that market should increase at a rapid pace thanks to higher demand for GPU accelerators, driven by an increase in artificial intelligence workloads and hyperscale data centers. So don't be surprised to see NVIDIA maintain its rapid growth rate in the forthcoming quarters as its two largest segments can keep trending higher.

Chewy is taking advantage of a shift toward online pet retail

The novel coronavirus pandemic has turned out to be a blessing in disguise for Chewy's business. The online pet retailer has seen a surge in orders in recent months as spending on pet supplies seems to be shifting online at a faster pace. The company's customer base is growing rapidly, and net sales per active customer are also increasing.

That's not surprising as pet parents have been spending more money to stock up supplies amid the pandemic. Chewy estimates that it could hit $6.60 billion in sales this year, a 36% jump over last year's top line of $4.85 billion. But more importantly, Chewy's growth story will last longer than the pandemic as the COVID-19 outbreak has simply accelerated the shift to online pet retail.

Third-party numbers indicate that online purchases of pet products has been growing rapidly since 2014. While the number of households that bought pet products at physical stores increased just 1% in 2014, the online segment jumped 77%. And in 2018, households shopping online jumped a whopping 275%, compared to 14% for in-store retail. The reasons behind the shift are simple: convenience to purchase from anywhere, competitive pricing, and wider product selection, among others.

More importantly, Chewy's addressable market is likely to keep growing as online sales reportedly accounted for 18% of the pet retail industry last year, according to research from Packaged Facts. That proportion is expected to increase in the coming years and give Chewy more room to grow sales.

In all, Chewy can enviably sustain its growth in the coming years. That's why it may be a good idea to take advantage of any dips in the stock, which is currently trading at 5.2 times trailing 12-month sales. Investors looking to scoop up a growth stock at a more attractive price in the event of a market downturn should keep Chewy in their sights, as it has room to run higher.