Most investors understand the traditional cable TV business is dying thanks to streaming alternatives like Netflix (NASDAQ:NFLX) and Walt Disney (NYSE:DIS), which owns Hulu and Disney+. What most investors may not yet fully appreciate, however, is just how much this paradigm shift has accelerated in 2020. This year is shaping up as the proverbial tipping point for linear cable names like Comcast's (NASDAQ:CMCSA) Xfinity and Charter's (NASDAQ:CHTR) Spectrum cable television businesses.

The funny thing is, it's not the subscription-based services doing all the recent damage to the cable industry. Ad-supported video alternatives are picking up lots of steam. Two new data nuggets revealed this week underscore this idea. 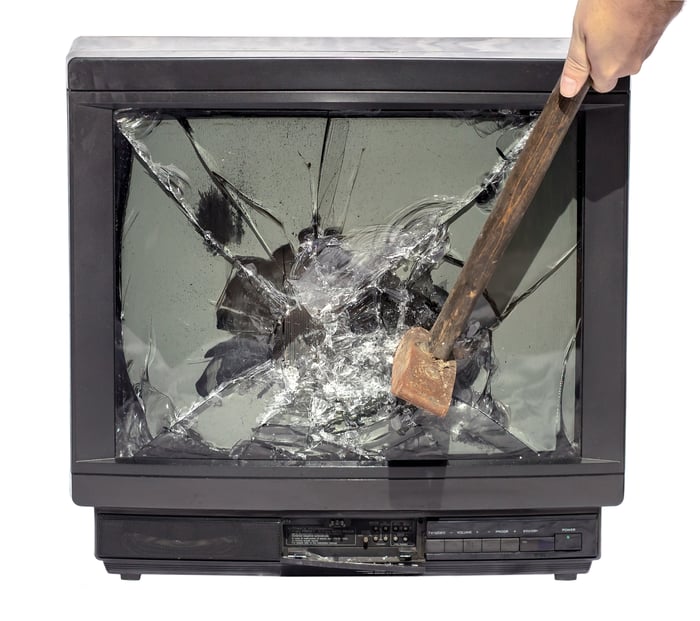 Free, ad-supported video on demand (or AVOD) isn't exactly a new idea. Fox's (NASDAQ:FOX) (NASDAQ:FOXA) Tubi has been around since 2014. Pluto TV, now owned by ViacomCBS (NASDAQ:VIAC) (NASDAQ:VIAC.A), has been around since 2013. Both are respected, but neither have been game changers. Consumers arguably saw these free video platforms through a "you get what you pay for" lens.

But it would be short-sighted to suggest the AVOD industry hasn't radically evolved over the course of last year and this year.

Yes, the advent of Comcast's Peacock contributes to that evolution with its pricing twist. While two tiers of its service require a small monthly payment of $9.99 or $4.99, the third tier that airs commercials during programming is entirely free. Watchers don't seem to care, either. CEO Brian Roberts commented at the Goldman Sachs Communacopia Conference held earlier this week that Peacock now boasts 15 million members, up from just 10 million as of the end July. Streaming service aggregator Reelgood estimates that about 90% of the content streamed through Peacock is consumed by users of the free tier. True to their word, television fans don't mind the occasional TV commercial.

Peacock isn't the only free streaming service to add a lot of viewers in a short period of time, though. Tubi also reported this week that its headcount now stands at 33 million regular monthly watchers, up 65% year over year, and well up from 25 million as of the end of 2019. These folks are watching a lot more of Tubi free ad-supported content, too. The 200 million streamed hours of TV Tubi per month since April is an increase of more that 100% compared to a year ago.

In this same vein, AT&T (NYSE:T) CEO John Stankey confirmed this week that a free, ad-supported version of HBO Max is coming sometime in early 2021.

In the meantime, nearly 4 million more traditional linear cable customers have cut the cord this year. That pace of cord-cutting slowed down during Q2, perhaps because most consumers have been stuck at home in an effort to avoid exposure to the coronavirus. Even so, some of those consumers are clearly swapping their paid-cable service for a free, ad-supported alternative.

The dynamic is nothing new. Netflix and other paid-subscription streaming brands like Hulu and Disney+ started to chip away at the U.S. cable television industry's customer base beginning around 2013. Ad-supported video on-demand options haven't yet culled paid-streaming subscribers, but their operators haven't yet tried in earnest to do so. But that's what's new for 2020 and beyond: Backers are starting to take AVOD seriously. Comcast's ad management tool, called One Platform, was largely built from the ground up with Peacock in mind; One Platform is a "data-driven cross-platform campaigns optimized for unduplicated reach across the company's linear, digital video and OTT [over the top television] footprint," the company said in a release.

Translation: Advertisers will be able to do more with data gathered through streaming that simply doesn't exist with conventional cable alone.

And it's not just Comcast. In March, AT&T's advertising unit Xandr (yes, the one it's reportedly looking to sell now) unveiled its new "data-driven linear TV technology." Earlier this month, Verizon (NYSE:VZ) and Dish Network (NASDAQ:DISH) -- the name behind Sling TV -- teamed up to improve the efficiency of buying connected-television and over-the-top television ads.

Read between the lines. These media companies are now showing more interest in maximizing the monetization potential of streaming video than they ever have in the past. Better monetization potential of a growing number of AVOD viewers means it finally makes sense to make more deliberate investments in the model, which in turn grows the audience, which in turn boosts ad revenue, etc. Peacock and Tubi alone added nearly 30 million new viewers between them in just a few months. Just wait until these media companies really pull out all the stops.

Bottom line? This is the tipping point, which is tough news for SVOD names like Netflix and Hulu, but awful news for cable operators like Charter, and even Comcast's Xfinity cable business. Tubi CEO Farhad Massoudi arguably summed it best, saying in a release, "Tubi's surge in viewership is a testament to 2020 becoming the year of AVOD."