The Air Force just took the wraps off a top-secret prototype of its next-generation fighter plane. The aircraft, which caught Pentagon watchers by surprise, could have significant implications for defense contractors.

Here's what we know about the just-unveiled Next Generation Air Dominance (NGAD) prototype, and why it could usher in a new era for the defense primes who battle each other to win these lucrative fighter orders.

It's been more than two decades since the Air Force debuted a new fighter concept, and Lockheed Martin's (NYSE:LMT) F-35 Joint Strike Fighter, the plane that emerged out of that competition, is only now nearing full production. The F-35 is still considered state-of-the-art, but with technologies constantly changing, the Air Force is always looking for what's next.

Air Force acquisition head Will Roper in an interview with Defense News published Sept. 15 said that the military has secretly designed, built, and flown a sixth-generation fighter.

"We've already built and flown a full-scale flight demonstrator in the real world, and we broke records in doing it," Roper told Defense News. "We are ready to go and build the next-generation aircraft in a way that has never happened before." 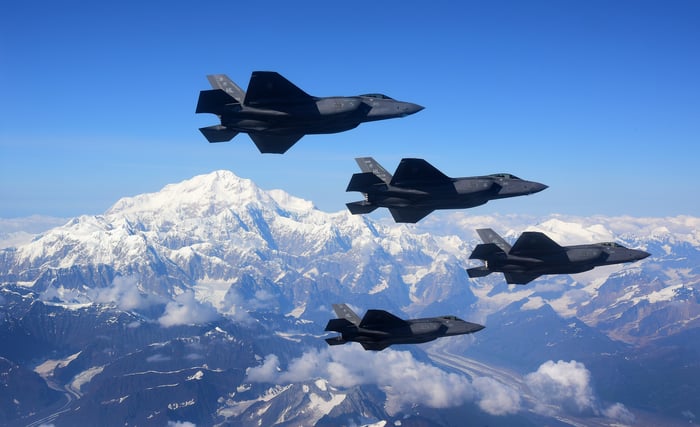 The plane was developed in about a year, an amazingly quick timetable by modern aerospace standards. By comparison, the F-35 prototype needed about four years to get airborne.

Most everything about the fighter other than its existence is classified. The plane it will follow, the Lockheed-made F-22 Raptor, has underwhelmed, and its replacement will likely look to build on the F-22's speed and stealth strengths with upgraded electronics that would allow it to coordinate with drones and perhaps eventually fly without crews.

We could know more soon. Assuming the plane is as good as Roper says it is, a version of it could move from a demonstration project to an initial order in the years to come. That could mean new competition for the F-35 and Boeing's (NYSE:BA) F-15, as well as a huge new opportunity for a number of defense contractors.

Who is the Air Force working with?

For defense investors, the billion-dollar question is, who built the prototype?

The most likely candidates are Lockheed Martin, Boeing, and Northrop Grumman (NYSE:NOC). Lockheed Martin has dominated fighter competitions since the Cold War ended, and its Skunk Works research facility has a long history of developing top-secret aircraft in coordination with the military, including the U-2 and SR-71 spy planes.

Northrop Grumman was the runner-up in the F-22 competition, and in 2015 beat out a joint proposal from Lockheed and Boeing to develop the B-21 Raider long range bomber. The company also has a huge pipeline of classified contracts on its books, though it has been assumed much of that funding is related to the B-21 and Northrop's massive space operations.

Boeing, meanwhile, endured runner-up status in a number of these major competitions, but in 2018 did win a $9.2 billion contract to manufacture the Air Force's new T-X trainer jet. That could be significant, as the new T-7A was designed using some of the same digital engineering techniques the Air Force used to speed NGAD development, and won in part because its electronics were seen as easily upgradable. 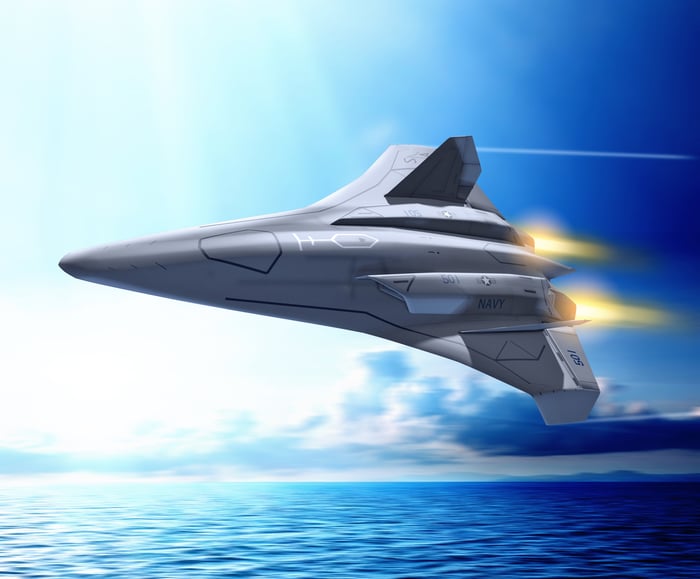 Roper also hinted that the Air Force could go beyond the usual suspects. The new fighter is using advanced manufacturing techniques developed by the private sector, which he said could allow new entrants.

It's hard not to think about Elon Musk's SpaceX, Jeff Bezos' Blue Origin, or even Richard Branson's Virgin Galactic Holdings (NYSE:SPCE) when reading those words.

This plane could be a game-changer

We'll get some insight into the Air Force's thinking as soon as the 2022 budget request. If this new plane is ready for prime time in the next few years, that could influence the government's F-35 and F-15 purchase plans.

Defense contractors have always fought hard for each new fighter contract, because the programs don't come along often and can be worth huge sums of money over a number of years for the winner.

The Pentagon is trying to break that model, hoping to use digital engineering, 3D printing, and other advanced manufacturing processes to design and produce a plane more quickly and make smaller-batch orders more economically feasible. If so, we could soon be entering an era in which the Air Force buys a new bleeding-edge design every few years, and contractors could spread the wealth around instead of facing winner-take-all contests every decade or so.

That's a huge opportunity down the line. But for now, one of the major U.S. contractors appears to have a leg up on a substantial contract that in Lockheed's case could reinforce its dominance in the fighter space, or for Boeing or Northrop could open up a new, lucrative business line. Investors are going to want to watch closely to see how this saga plays out.