The airline is waiting to hear from Washington before resorting to involuntary cuts.

Delta Air Lines (DAL -3.45%) will delay a decision on whether to furlough pilots until at least Nov. 1, allowing time for the industry and its workers to lobby for additional government assistance.

Airlines including Delta have been hit hard by the coronavirus pandemic, which has caused second-quarter revenue to fall 80% year over year. But the industry has been aided by $25 billion in payroll support secured in the CARES Act stimulus plan, in return for airlines doing no layoffs through Sept. 30. 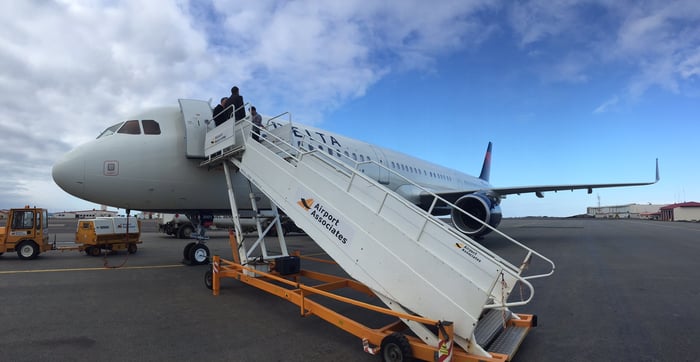 With the deadline fast approaching, Delta and other airlines are making plans to trim their payrolls in October. The airline has been in discussions with its chapter of the Air Line Pilots Association (ALPA) concerning how to cut costs, and according to an ALPA update Tuesday, has agreed to hold off on cuts while Washington debates further payroll assistance to the industry.

"This move will provide time as we continue to lobby for a clean extension of the CARES Act and the Payroll Support Program and resume our negotiations with Delta," ALPA told members.

Delta has said that absent a deal with the union, it could eventually furlough up to 2,000 pilots.

Other airlines have had more luck working with labor to find ways to avoid furloughs. United Airlines Holdings (UAL -3.54%) has a tentative deal with its pilots to avoid furloughing nearly 3,000 of them, and Southwest Airlines (LUV -2.12%) said involuntary cuts will likely not be needed after getting strong response from workers on voluntary separation offers.

The union said it is continuing talks with Delta on alternatives to furloughs in the event Washington does not come through with added funding.

"ALPA's focus will remain on our efforts that seek creative solutions with Delta to achieve a win/win agreement that preserves pilot jobs while positioning Delta to springboard back to where they were pre-COVID," the note said. "Keeping these employees working will invigorate our economy, avert the depletion of state and federal resources, and firmly place the airline industry in the starting blocks for a quick rebound."

Why Shares of Faraday Future Are Flying Higher Today