The stock market has made a terrific recovery since the March crash that was fueled by the novel coronavirus pandemic, with the S&P 500 rallying more than 54% since hitting its recent low point on March 23.

But it is widely believed that the rally has caused the stock market to become overvalued, especially considering the negative impact of the COVID-19 crisis on several business sectors. The results of a survey of Fortune 500 CFOs conducted by Deloitte a couple of months ago revealed that 84% of the respondents say that the U.S. stock market is overvalued, a sharp rise compared to the 55% respondents who held a similar belief in the quarter before. 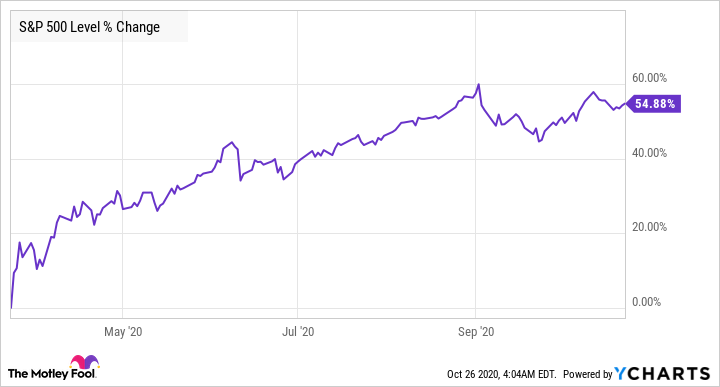 That survey result isn't all that surprising, as the average earnings of the S&P 500 companies in the recently concluded September quarter are estimated to have declined around 18% year-over-year. The stock market has rallied despite this bear market red flag, creating the possibility of another crash.

But savvy investors should have a longer-term outlook on investing and see if opportunities present themselves to buy winning stocks at a discount if the market crashes. Applied Materials (NASDAQ:AMAT) and NVIDIA (NASDAQ:NVDA) are two such stocks that could be great long-term picks if (or more likely, when) a market downturn happens.

Applied Materials gets a huge chunk of its revenue by selling fabrication equipment to chipmakers, who then use the equipment to make chips for various applications. The semiconductor systems business supplied two-thirds of the company's top line in the fiscal third quarter, which ended on July 26, recording 28% revenue growth over the prior-year quarter thanks to the growing demand for new chip technologies.

The good news for Applied Materials is that the outlook for the chip manufacturing equipment market remains bright. According to a SEMI (a global semiconductor industry association) report, sales of semiconductor equipment are expected to jump to a record high of $70 billion next year, recording double-digit growth from this year's estimated spending of $63.2 billion.

The demand for chips from various fast-growing tech verticals such as fifth-generation (5G) wireless networks, the Internet of Things (IoT), and artificial intelligence is anticipated to rise in the coming years. Not surprisingly, semiconductor foundries such as Taiwan Semiconductor Manufacturing are ramping up their investments in chipmaking equipment and boosting Applied Materials' revenue opportunities.

Third-party estimates put Applied Materials' share of the semiconductor equipment market at almost 19% at the end of 2018 -- the highest in the industry. So Applied Materials is well placed to take advantage of the growing spending on semiconductor equipment, making it an ideal bet for investors looking to buy a dividend-paying growth stock at a reasonable valuation.

Trading at less than 18 times trailing earnings, Applied Materials looks like an enticing bet given its high rate of growth. It also sports a dividend yield of 1.42%, giving investors a regular stream of income, along with the potential upside that the stock could deliver going forward.

Assuming that a broader market crash sends Applied Materials stock lower, investors will have an opportunity to buy a potential long-term winner at a much cheaper valuation. But at the same time, it won't be surprising to see the stock appear unscathed out of a potential market correction because of two reasons.

First, Applied Materials' growth rate is impressive. It has recorded 15% revenue growth in the first nine months of the year and expects to finish the year on a high with year-over-year revenue growth of over 22% in the fourth quarter. Second, Applied Materials seems undervalued with respect to the growth it is clocking. Its trailing P/E ratio is in line with the five-year average multiple, while growth has picked up in the past five years. 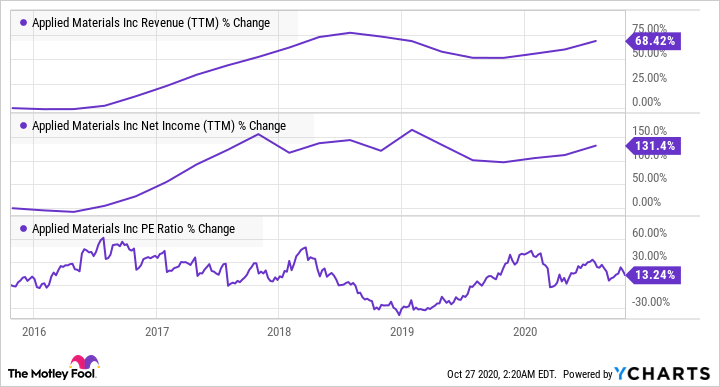 So, there isn't much incentive for Applied Materials stockholders to sell the company's shares and book profits as it trades at a really attractive valuation right now. It still has a lot of room to grow its business and turn out to be a winning bet in the long run, which is why it looks like a good investment to make despite the possibility of a broader crash.

2. NVIDIA's graphics cards dominance will be a long-term tailwind

NVIDIA dominates the discrete graphics card market with a share of 80%, according to Jon Peddie Research. This puts the company in pole position to take advantage of the fast-growing demand for GPUs (graphics processing units), which are being deployed for several applications ranging from personal computers to data centers to self-driving cars.

Globally, GPU demand is expected to clock a terrific annual growth rate of 33.6% through 2027. The market is predicted to hit more than $200 billion in revenue at the end of the forecast period, up ten-fold from last year's revenue of just under $20 billion as per third-party research.

So NVIDIA still has a big enough opportunity to sustain the terrific growth rates that it has been clocking for quite some time now. 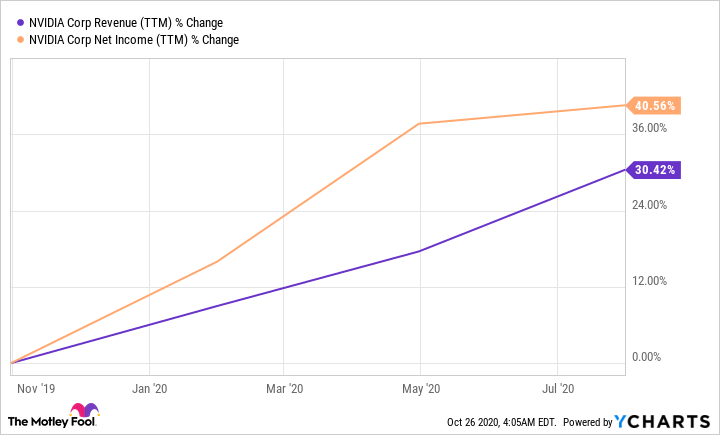 More importantly, NVIDIA has been taking steps to tighten its grip over the discrete GPU space. It recently launched its latest line of consumer graphics cards based on the Ampere architecture, bringing a huge bump in performance at prices identical to those of its preceding cards.

The data center business should also enjoy the benefits of the shift to the Ampere architecture. NVIDIA's A100 data center GPU is witnessing impressive traction at leading cloud service providers and server providers thanks to its artificial intelligence (AI) training and inferencing capabilities.

What's more, NVIDIA could also become a leading play on AI-driven verticals such as autonomous cars thanks to its pending acquisition of SoftBank-owned Arm Limited. All in all, NVIDIA is pulling the right strings to ensure that it continues to hold the upper hand in the graphics card space in the future through its product development moves, and it is also utilizing acquisitions to take a bite out of emerging technologies.

It wouldn't be surprising to see NVIDIA maintain its high growth rates over a long period of time. However, investors looking to go long NVIDIA will have to pay a rich premium, as it trades at nearly 100 times trailing earnings. A forward price-to-earnings (P/E) ratio of 50 isn't cheap either.

But analyst estimates compiled by Yahoo! Finance suggest that NVIDIA's earnings could grow at strong double-digit rates in the coming years, so it may be worth the premium. However, investors may get an opportunity to buy NVIDIA stock on the cheap in case of a market crash as history tells us. The stock had lost over a quarter of its value in the space of just over a month earlier this year when the tech-dominated market correction happened. 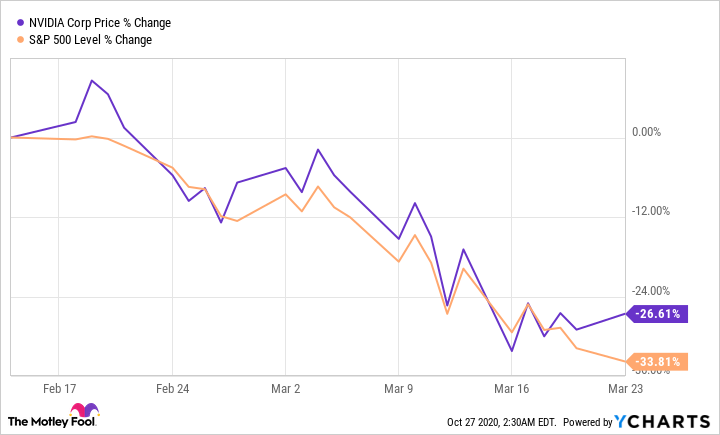 NVIDIA stock rallied strongly after that pullback once it became evident that the company isn't going to be affected much by the COVID-19 crisis. The good news is that the fundamentals of the business continue to remain strong thanks to the growing demand for graphics cards, NVIDIA's strong positioning in that market, and its efforts to future-proof its business through a major investment in AI -- all of which could help it remain a top growth stock in the long run that investors could get at a lower valuation if the market crashes.