The progression of a COVID-19 vaccine to market is top of mind for most Americans. Right now, over 67% of Americans believe that a vaccine is needed for life to return to normal, but many would still lack confidence in an approved vaccine. Almost 29% respondents to a ClearPath poll said they would wait at least one year to get a vaccine that's deemed safe and efficacious. Luckily, Moderna (NASDAQ:MRNA) currently has one of the most promising COVID-19 vaccine candidates in the works, which employs new messenger RNA (mRNA) technology. The pressure is on for the fledgling biotech to return trial results soon, especially since competitors Pfizer (NYSE:PFE) and BioNTech (NASDAQ:BNTX) reported their candidate's 90% efficacy upon its interim analysis on Monday.

Coronavirus cases in the U.S. reached a new daily record of 132,541 on Nov. 6, and on five days of seven last week, more than 1,000 deaths were recorded. If you're an investor, you might find yourself especially anxious about when a COVID-19 vaccine would be widely available: A consistent rise in the share prices of the companies who succeed in their coronavirus projects will surely accompany their achievements for the public good. Year to date, Moderna's stock is already up more than 290% on coronavirus investor optimism. But will Moderna's candidate successfully clear clinical studies and advance to approval? Is the stock a buy regardless of the outcome? 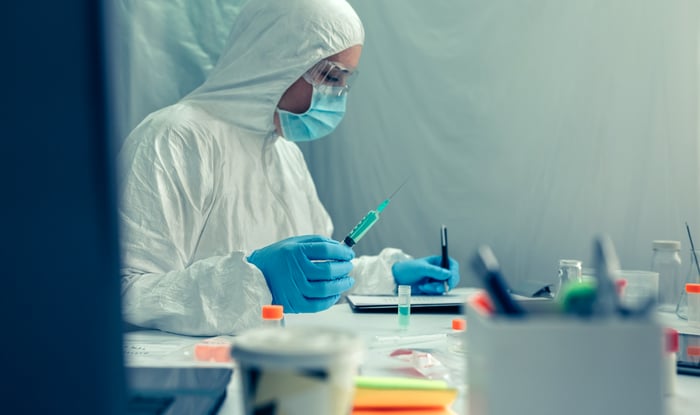 What investors should look out for

Although all healthy volunteers who received mRNA-1273 in phase 1 clinical trials developed significant antibody responses, that study did not evaluate whether or not those antibodies held up if patients became exposed again to SARS-CoV-2. The company's phase 3 clinical trial accounts for this, as it selected 30,000 participants (all of whom had been inoculated as of Oct. 22) worldwide who are at risk of contracting COVID-19.

The study randomizes half of the participants to receive a placebo and the other half to receive mRNA-1273, and subsequently compares the two groups' COVID-19 infection rates. The data will be analyzed at three points in time when the total number of coronavirus cases in both groups reaches 53, 106, and 151, respectively.

During each stage, the trial can end if the experimental vaccine demonstrates at least 74%, 57%, and 50% efficacy, respectively, compared to placebo. If mRNA-1273 does not pass the efficacy threshold at the first or second stage, the study will move into the third stage for final analysis.

However, the U.S. Food and Drug Administration (FDA) mandates that coronavirus vaccine candidates must achieve 50% efficacy against placebo. So, if mRNA-1273 does not meet the endpoint at the final analysis, the study will fail. The trial can also terminate at any stage of the analysis if mRNA-1273 seems futile against placebo or severe safety concerns emerge. Investors' key event to watch for is whether the mRNA-1273 study terminates early for lack of efficacy at the first point of analysis, or continues as planned.

At this point, there is a lot at stake for Moderna, because mRNA-1273 has not been tested against placebo in previous studies, so the trial could go either way. Fortunately for investors, Moderna has a robust pipeline in case its vaccine candidate fails.

Aside from mRNA-1273, the company is also developing five vaccine candidates, five immuno-oncology candidates, four rare disease therapies, and two autoimmune disease inhibitors. The most promising of these candidates is a potential cytomegalovirus (CMV) vaccine. The virus is the leading cause of congenital disabilities in the U.S. and the developing world, and it currently has no cure. The Centers for Disease Control and Prevention (CDC) estimates that CMV will infect half of adults in the U.S. by the time they turn 40, with most patients developing mild symptoms.

There is no approved vaccine for CMV, and Moderna expects to run its own candidate through phase 3 clinical trials starting in 2021. If that succeeds, the company expects to generate $2 billion to $5 billion in peak annual sales post-approval.

Speaking of market opportunities, there is no doubt mRNA-1273 can tackle a huge one. So far, Moderna will potentially supply the U.S., Canada, Japan, Switzerland, Israel, Qatar, and several undisclosed countries with up to 606 million doses of mRNA-1273, contingent on its approval. The company is also setting a production target of 500 million doses to 1 billion doses by next year. Bulk purchase data suggests the company is pricing its vaccine at around $15 per dose.

Moderna's stock still isn't cheap. A nice $4 billion in cash on its balance sheet actually makes the company look a little less expensive if we're just look at enterprise value (EV), which sits around $25 billion compared to its $30 billion market cap. But Moderna still sports a forward price-to-sales (P/S) ratio of 88 and a trailing twelve-month (TTM) P/S ratio of 107. These measures could still shift, because they don't assume that the company will advance mRNA-1273 to approval and produce up to 1 billion doses of its vaccine candidate per year. It's hard to ignore the lofty valuation, however, given that the average P/S ratio of the biotech industry is 6.8.

Moderna stock could enjoy a massive rally if its coronavirus vaccine delivers positive phase 3 data, due purely to the magnitude of the market opportunity, dwarfing its current pricey valuation. Conversely, if mRNA-1273 fails its late-stage study, shareholders would probably witness a catastrophic decline in its stock price. For now, biotech investors interested in Moderna should open a small stake to hedge against such binary outcomes and pay close attention to the first, second, and final interim analyses of the study before piling in or getting out.