With the world moving faster in the direction of renewable energy every day, and a new U.S. administration pledging to put the country on a path to zero emissions by 2050, renewable energy stocks have been in the spotlight. To be sure, the challenges to make good on the promise of a clean energy future are significant -- but so are the potential rewards that successful innovators in this space may enjoy.

Understanding where the main challenges are, as well as what President-elect Joe Biden's administration may reasonably be able to achieve relative to its stated goals, will be key to investing successfully in this space. 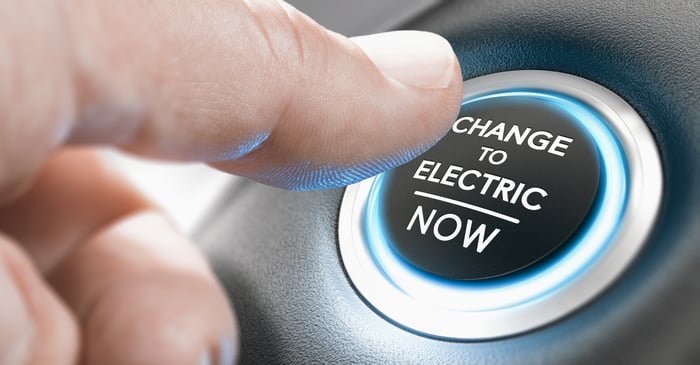 After getting a lot of attention from investors a decade ago, clean-tech companies went through a bit of a "solar coaster" -- some of the early high-flyers produced less-than-optimal outcomes, while others struggled for a while or kept a low profile, and only began making significant and steady headway in the last few years. The dynamic is reminiscent of the dot-com fever, subsequent crash, and later boom in e-commerce. Now, big money is rushing back into the sector, as evidenced by the almost-too-many-to-count SPACs merging with clean-tech companies in 2020 alone.

All economic activity requires energy. And the next administration has promised to put the country on a completely different energy path: de-emphasizing fossil fuels while incentivizing clean energy and energy efficiency -- to the tune of $2 trillion over the next four years. While it's unclear as of this writing to what extent Congress will fund this ambitious agenda, the administration still has plenty of existing regulatory authority at its disposal to push very far into its vision. And while the political environment alone should never be the sole criteria for making investment decisions in a sector of the economy, policy and regulation can be powerful allies when coupled with fundamental economic drivers.

Plenty of opportunities ahead

Clean-tech companies have enjoyed their moment in the sun in 2020, which has resulted in many pricey stocks. However, the challenges to get to zero emissions by 2050 are so vast that there is still plenty of opportunity ahead for both established and emerging players in the sector.

Key areas likely to benefit from both investor enthusiasm and the new administration's agenda are those solving some of the major challenges ahead: the transition to zero-carbon energy generation, energy storage, and electric mobility are at the top of the list.

For example, the Solar Energy Industries Association (SEIA) reports that, as of Q3 2020, total contracted megawatts to be built over the next 18 months, or "project pipeline", for Utility-Scale installations reached its highest level ever recorded. SEIA also predicts healthy growth through at least 2023, even assuming no new policy developments come out of the incoming administration.

The National Renewable Energy Laboratory (NREL), on the other hand, estimated earlier this year that investments in energy storage, or batteries, would increase at least seven-fold through 2024 from 2019 levels -- with demand shooting up another 22 times from there by 2050, at a minimum. Again, assuming there are no significant policy changes from today.

After well over a decade of developing solar and wind power plants, according to the latest data, these two sources of energy account for only about 9% of the total electricity generation in the U.S., with almost 65% of all electricity coming from carbon-emitting sources. And solar and wind are at this time the lowest-cost zero-emission energy sources, so they are well-positioned to take the lion's share of all new generation going forward. There are a number of players, large and small, with a solid history of profitably building solar energy generation for utilities across the U.S., with NextEra Energy (NYSE:NEE) being the largest, best-established public utility and renewable energy developer in this space. The company has announced the construction of an impressive list of projects in the coming years, and has a proven track record of financial execution. Given its experience and leadership position, NextEra is well-placed to continue to dominate renewable project development in the U.S. for the foreseeable future, and to deliver market-beating returns for its investors.

One of the key challenges to deploying renewable energy at scale is energy storage, or batteries. Solar and wind are "intermittent" sources of energy -- they turn off at night and when the wind stops blowing. So solar and wind power plants need to store excess energy during peak times to then supply it during the off times.

A lot of innovation is needed in this space, and while there are some promising technologies on the horizon and some leadership beginning to develop, there are few independent public companies dedicated solely to storage. One of the current market leaders is Fluence, a private company, and a joint venture between the AES Corporation (NYSE:AES) and Siemens (OTC:SIEGY).

Here AES gets to "double-dip" into renewables -- both as a U.S. utility that has successfully pivoted to renewable generation and project development, and as an investor in Fluence. As a utility, AES stock has outpaced the S&P 500 for the last five years. As an early stage investor, AES derives very little in terms of financial value from Fluence at this time. However, as Fluence continues to grow and solidify its leadership position, AES is bound to benefit. And AES's stock is priced much more affordably than Tesla's (NASDAQ:TSLA), its main competitor in large-scale storage.

This is a sector where a certain appetite for risk may be in order. Tesla is by far the dominant EV maker right now -- and its leadership will likely continue for a while. And Tesla also gets to double-dip as a leading provider of energy storage systems for electric utilities. However, and perhaps for these reasons, Tesla stock is very pricey at the moment. Luckily, there has been a lot of investment in EVs in the last few years, with companies announcing an intriguing new concept vehicle almost on a weekly basis.

But these companies haven't yet delivered much in terms of products -- let alone revenues or profits. So what are buy-and-hold investors, skeptical of Tesla's valuation, to do? One idea may be to spread the risk and invest a small amount in several of the new EV entrants. Among the most promising ones in this batch are Lordstown Motors (NASDAQ:RIDE), Hyliion Holdings (NYSE:HYLN), Workhorse (NASDAQ:WKHS), and QuantumScape (NYSE:QS). Each of these companies has disruptive products, visionary management with lots of industry experience, and significant alliances in place with automotive manufacturers -- along with plenty of fresh cash to bring their products to market.

While investing in renewables may appear pricey right now, trying to time the market and wait for valuations to come down could be risky. For all the hype and optimistic stock valuations, renewable generation, energy storage, and electric vehicles still command a very small amount of market share in their respective industries. So investors who believe that a zero-emissions future is in the cards may be looking at a ton of upside, even from current levels.