Please ensure Javascript is enabled for purposes of website accessibility
Free Article Join Over 1 Million Premium Members And Get More In-Depth Stock Guidance and Research
By Reuben Gregg Brewer - Dec 18, 2020 at 7:35AM

When the world looks back at 2020, it will be the year that the integrated giants started to turn away from oil. Here's what you need to know.

The year started off bad

After over a decade of production increases in the U.S. onshore space because of the growing use of fracking, the world entered 2020 with slightly more production than demand. It was an imbalance that OPEC and its partners had been trying to manage with production cuts. The problem was that every time OPEC trimmed output, it seemed like U.S. drilling just stepped in to take up the slack. Eventually, tensions within the oil group started to rise and a rift opened up with partner Russia. 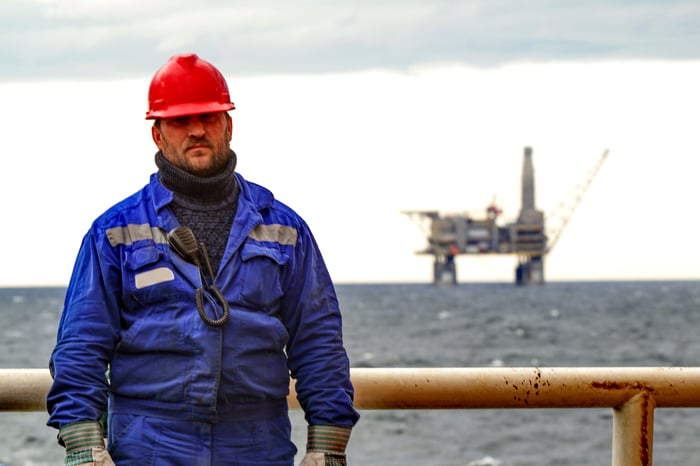 Russia and OPEC opened up the spigots and started pumping oil without concern for demand in early 2020. Oil prices started to fall, as you would expect. At the same time this was going on, however, the coronavirus was starting to spread around the world at an alarming rate. Countries began to shut down their economies to slow the spread of the novel illness, leading to a steep drop in energy demand. With supply high and demand falling off a cliff, oil prices started to plunge. In fact, the price of West Texas Intermediate crude, a key U.S. oil benchmark, actually fell below zero at one point.

OPEC and Russia resolved their differences pretty quickly, but the damage was done. Worse, all of the excess oil being produced was getting put in storage. That led to an overhang of supply that needs to be worked off before energy prices can mount a sustained rally. The market was still severely out of balance in December, as 2020 has drawn to a close. This backdrop was enough to send shares of the energy industry's giants, the integrated oil majors, into a tailspin. But that is just part of the year's story.

At the same time that supply and demand were being hit by the long uptrend in U.S. production growth and coronavirus demand issues, there was also the long-running shift toward clean energy to consider. From renewable power to the electrification of the auto sector, energy companies in Europe started to believe that there was a seismic shift taking place. Some viewed the coronavirus demand decline as a warning of what the future could hold if energy companies didn't act with haste to adjust.

Both Royal Dutch Shell and BP, straining under the weight of low oil prices, announced dividend cuts to preserve cash. At roughly the same time they revealed plans to shift capital spending priorities, placing a materially greater emphasis on transitioning toward clean energy (such as solar and wind power) and electricity-based businesses,like electric vehicle charging stations. Although not exactly a new trend, the announcements from this pair represented a material increase in the pace of change. BP, for example, plans to cut its oil and natural gas production by a massive 40% by 2030. In short, 2020 will mark a major turning point in these businesses, as they use their cash-cow energy operations to fund an electric and clean energy overhaul. 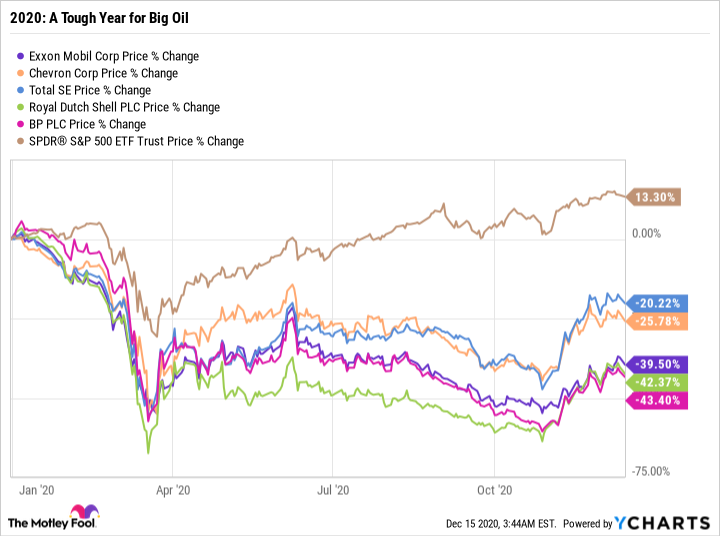 Taking a less extreme position is Total, which believes it can sustain its dividend (as long as oil stays above $40 per barrel) and fund a slow and steady shift toward electricity. The French energy giant is planning to increase its production of natural gas, which is expected to see demand growth as the world tries to reduce carbon emissions. It will reduce oil production, focusing on its best assets. And it will continue to expand its exposure to "electrons," tripling the size of that business by 2030. The key, however, is that it isn't planning to abandon its dividend or the oil sector as it changes. To use a sports analogy, Total is choosing to punt.

Chevron and Exxon, meanwhile, have largely decided to stay the course on the carbon front. Like all of the energy majors, they've been forced to reduce spending in the face of a difficult market. But neither has announced major plans to transition to electricity. That said, the pressure is mounting for such a shift, with activist investors from the Catholic Church to pension funds to Wall Street firms looking for a change.

Although the U.S. giants haven't announced changes as large as those being made in Europe, they are talking more and more about cleaning up their carbon footprints. But so far that hasn't included building out non-oil operations. This pair is, relatively speaking, doubling down on fossil fuels.

There's obviously no way to know what the future holds, but 2020 will likely represent a key turning point for oil majors as they start the transition toward clean energy.

For oil and natural gas investors, the question to consider is the path you want to follow. BP and Shell have announced material directional shifts. Total is cutting a middle ground. And Chevron and Exxon are taking their time with the transition, believing that the oil market still has some life left in it. Although none of these companies appears to be at risk of becoming obsolete right now, those moving too slowly could end up being left behind. On the other hand, moving too quickly could come with costs, too, if oil and natural gas prices surge as the world moves past the coronavirus.

There are no easy choices for investors from here, but at least the directional choices being made at the oil companies are becoming more and more clear. As an investor, you need to decide which option makes the most sense to you.