But in an increasingly tense legal and regulatory landscape, smart investors should pay attention to that tech giant's history for context.

What a wild ride it's been for Big Tech. After decades of Washington applying a relatively soft-touch regulatory approach to the sector's leaders, there's been a sharp turn toward much fiercer rhetoric over the last two years. The sentiment that it's time to rein in those companies is widespread. Big Tech has drawn the ire of congresspeople on both sides of the aisle, and it is increasingly taking heat from officials at the state level as well.

However, one mega-cap tech company has been noticeably absent from the list of those that are earning lawmakers' ire: Microsoft ( MSFT -1.97% ). 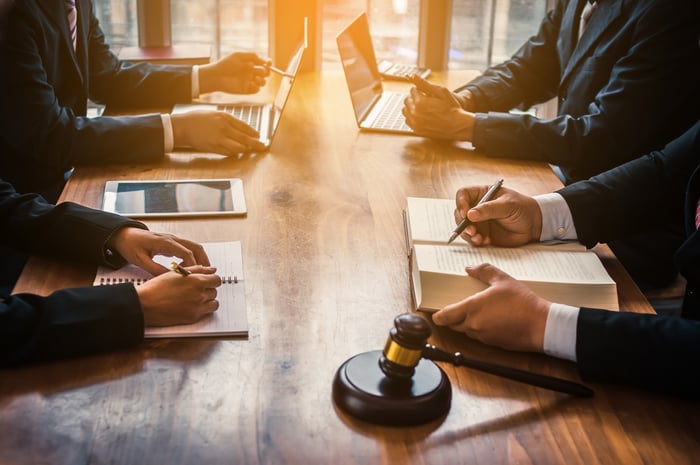 Facebook ( FB -1.14% ) has been the most visible target of governmental scrutiny and pressure of late. President Trump has been aggressive in his efforts to overturn social-media friendly Section 230 of the Communications Decency Act, first by issuing an executive order in May and then threatening to veto the annual National Defense Authorization Act if the provision's repeal is not included in it.

However, the executive order has been challenged in court on legal and constitutional grounds. Meanwhile, the bill Trump was threatening has passed both houses of Congress with veto-proof majorities.

An antitrust lawsuit originating at the state level with 46 state attorneys general and the FTC challenging Facebook's earlier acquisitions of Instagram and WhatsApp appears to be the bigger risk to the company at the moment.

Apple's ( AAPL -1.17% ) biggest legal challenges relate to its App Store marketplace's policies. The first is a lawsuit from Fortnite creator Epic Games, which does not want to keep paying Apple a 30% cut of the revenue that the popular title generates through in-app transactions.

More recently, Cydia has sued Apple. Similarly to the Epic suit, it alleges that the iOS App Store model is an illegal monopoly. In a federal court filing, Cydia claims its own (unauthorized) iPhone app store existed before Apple's, and that due to Apple's anticompetitive conduct, it has essentially been shut out of the iOS distribution market.

Amazon is facing a similar marketplace-related class-action lawsuit. Plaintiffs allege it uses its monopoly power to essentially dictate prices on third-party products. Finally, in October, the U.S. Justice Department and 11 state attorneys general filed a lawsuit alleging Alphabet's search business constitutes an illegal monopoly. A recent report from The Wall Street Journal suggests there are additional lawsuits in the works against the search giant.

How does this help Microsoft?

There are a few ways that keeping out of the courtroom benefits Microsoft. The first is that legal problems are a bandwidth issue. The more time C-suite occupants spend responding to government inquires and ensuring that their company is complying with injunctions, the less time they have to think about high-level strategy. The second is that court cases carry the possibility of monetary penalties. Ultimately, both of these tend to be minor concerns for the largest tech companies, but they are risks nonetheless.

The biggest risk appears to be that the results of court cases could force changes to some Big Tech business models, most notably on the mergers-and-acquisitions front. The multistate lawsuit against Facebook is interesting in that it seeks to revisit acquisitions that were sealed five or more years ago. While this may portend a more hostile environment toward all acquisitions in tech, Microsoft has been aggressively snapping up businesses recently with no pushback from regulators.

What should you do if you own these companies?

Investors generally employ one of two approaches when evaluating legal and regulatory risk, and both tend to be overreactions. The first is to quickly sell stocks at the prospect of a legal or regulatory challenge without knowing its full ramifications. The second -- which has admittedly been an effective strategy over the last decade -- is to haphazardly wave off any concern without applying proper due diligence.

The better long-term approach is to critically evaluate these risks in their proper perspective. Ironically, we can draw from Microsoft's history for some context about how stronger regulation might impact today's tech powerhouses. In 2000, a federal judge initially ruled that Microsoft's tactics in bundling Internet Explorer with its Windows operating system had violated antitrust laws. He ordered the company to be broken up.

On appeal, the breakup order was rescinded. That led the Department of Justice to settle its case in exchange for a host of concessions from Microsoft, including an agreement to share its APIs with third-party developers. Use of the Internet Explorer browser plunged and -- for a host of reasons not all related to the legal loss -- a "lost decade" followed for Microsoft investors. I don't expect such an aggressive result for the current targets of governmental ire, but some in Washington are looking to make a statement to Big Tech. Microsoft, though, is clearly out of their crosshairs.

While legal and regulatory risks have been minimal for this sector in recent years, investors now need to be more alert to them when doing their due diligence. Ultimately, your investment decisions should not be dictated by these concerns, but they are definitely worth keeping an eye on.