Stocks may have dished out big gains this year, but it's entirely possible you missed out on most of them. The pandemic-driven sell-off that first took shape in February flushed a lot of people out of their positions who were slow to step back into the big rebound from March's low. The market has a knack for surprising most investors most of the time.

If you're not interested in chasing individual stocks in the coming year and instead want to take a more passive approach, there's a solution. That is, own more exchange-traded funds, or ETFs. They lend themselves to bigger strategies and longer-lived holding periods.

Here are four such exchange-traded funds to start rounding out your portfolio for 2021. 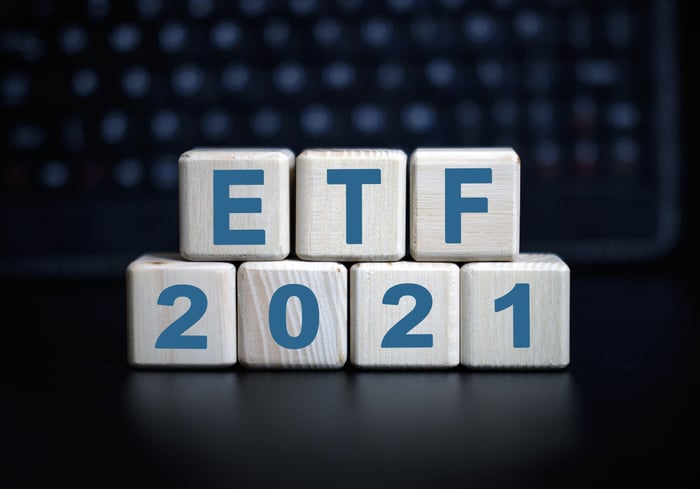 If you're a believer in the idea that nothing lasts forever, this might be the right time to switch strategic gears and step into a value-oriented fund like the Vanguard Value ETF (NYSEMKT:VTV).

And plenty of people think this sort of leadership shift looms. Bank of America's analysts, for instance, wrote earlier this month: "Despite the recent rotation, extreme valuations and entrenched positioning suggest we are in the early innings of a Value cycle. The relative discount for Value stocks remains nearly two standard deviations below average." This sets the stage for more outsized gains from value names, possibly at the expense of growth stocks.

The anticipated rotation back into value stocks is a theme centered around the U.S. market, but clearly, investors aren't limited to U.S. stocks. There's an entire planet's worth of publicly traded companies out there that don't necessarily trade like the United States' stocks do.

Picking winners among them can be tough, of course, perhaps even tougher than finding the best of the best localized names. An exchange-traded fund like the iShares MSCI Emerging Markets ETF (NYSEMKT:EEM) solves that problem by grouping the best of the best international names in one basket. Among the fund's biggest holdings are Alibaba Group Holding and Samsung, but also picks like SK Hynix and Reliance Industries, which aren't even directly available to North American investors.

The pump is primed for a particularly big 2021 from emerging market stocks, too, according Morgan Stanley and fund company Fidelity. Morgan Stanley's chief economist Chetan Ahya explains in a post on the Morgan Stanley website, "Trade-dependent economies, like Korea and Taiwan, are already well into their recoveries, while in the large, arguably more domestic demand-oriented economies, like India and Brazil, a number of indicators have recently exceeded pre-COVID-19 levels and are registering positive year-on-year growth."

Digital and cashless transactions are hardly anything new, but they had something of a moment in 2021 when the world scrambled to buy and sell goods without making physical contact with anyone else. Take PayPal Holdings for instance. Its total volume of payments facilitated during the third quarter of this year were up 38% year over year, boosted by the addition of 15.2 million active PayPal users. PayPal and other fintech stocks like Square were more than amply rewarded for being much-needed solutions providers in the throes of the pandemic, with several of these names more than doubling in 2020.

Their biggest bullish moves may be in the rearview mirror, to be sure. But that doesn't necessarily mean these stocks still can't leave behind some nice gains in the coming year. MasterCard's recently published 2021 outlook suggests that between 20% and 30% of the new e-commerce business created specifically because of the coronavirus will remain online even once the pandemic passes. In the meantime, the digital payments market was and is growing anyway. UnivDatos Market Insights estimates the world's digital payments market will grow at a compounded annual growth rate of more than 18% between 2021 and 2026.

It all makes ETFMG Prime Mobile Payments ETF (NYSEMKT:IPAY) an interesting prospect for the coming year.

Finally, while it was obscured by politics, a pandemic, and plenty of other distractions, 2020 was a pretty progressive year for the clean energy movement. In fact, it was a banner year. The total power production capacity of renewable energy sources like solar and wind grew on the order of 4% this past year, according to estimates from the International Energy Agency, thanks to a record-breaking 200 gigawatts' worth of new installations.

The point being, the energy market's paradigm shift can no longer be stymied by a mere global contagion.

And there's more of the same sort of growth in store now that renewables are quickly becoming the new norm. The IEA forecasts that wind and solar power output will eclipse that of natural gas by 2023, and coal's electricity production by 2024. By 2025, renewables should be the world's single biggest source of energy.

Of course, companies will be needed to build and install that sort of production capacity, like the ones that make up the iShares Global Clean Energy Fund (NASDAQ:ICLN). Among its biggest holdings are Plug Power, First Solar, and Spain's Siemens Gamesa Renewable Energy.