When it comes to streaming media stocks, it would be difficult to find two companies about which Wall Street has more widely divergent sentiments than Disney (NYSE:DIS) and AT&T (NYSE:T).

Shares of the House of Mouse have advanced by 20% in the last year as investors continue to express faith in management's streaming strategy. During the same period, the telecom giant hasn't just underperformed the broader market's gains -- it has handed its shareholders a loss of 25%.

Investors, however, don't make money by looking backward. The  critical task is to view potential investments on their merits going forward. It's also important to evaluate large companies with an eye toward all their varied businesses. For both AT&T and Disney, streaming is only one part of a much broader story. 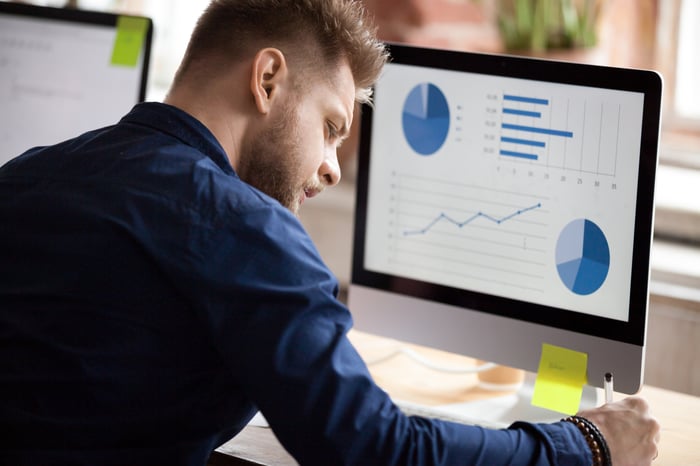 Disney has catalysts, but also risks

If Disney had a spirit animal in 2020, it was green and less than 2 feet tall. Investors were able to look past canceled sporting events, closed theme parks, and lagging box office sales to focus on the Disney+ streaming service and Baby Yoda, the breakout star of its breakout hit, The Mandalorian. In its first year, the service exceeded 73 million paid subscribers -- a target that management had originally expected could take five years to hit.

And therein lies the risk for Disney investors. While it's easy to forget the fact now, due to the company's newfound enthusiasm for streaming, Disney was a reluctant convert to the medium. Initially, it did everything it could to avoid streaming, fearing the growth of such services could lead to the unraveling of the large cable bundle, which has been one of its cash cows.

Remember, Disney owns -- among other networks -- the ESPN family, which at $9 per month are among the highest-cost channels in the cable bundle. ESPN has huge, long-term deals for sports broadcasting rights, and it must pay the leagues for them regardless of the viewership those games draw. In fiscal 2019, these costs were nearly $9 billion.

Even now, the company is being selective about what content makes it out of the cable bundle. For example, ESPN+ doesn't show live sporting events from the more lucrative leagues like the NFL and NBA, pointing to the fact that unit economics for sports streaming are not favorable for it.

Incremental growth in streaming revenues will be harder to come by, and Disney's direct-to-consumer segment still runs at a loss despite full-year revenue growth of 81%. Disney must continue to spend heavily to take on Netflix, and activist investor Dan Loeb wanted shareholders to take the hit, imploring Disney in an open letter to suspend its dividend to double down on streaming.

While it seemed like Disney could do no wrong in streaming, AT&T could do no right. Its HBO Max service had a slower-than-expected rollout, for which many pundits blamed the nearly $15 per month subscription price.

But HBO Max got a shot in the arm when AT&T announced that movies produced by its Warner Brothers studio would concurrently be released in theaters and through the HBO Max app. The Christmas Day release of Wonder Woman 1984 led to more than half a million downloads of the HBO Max mobile app over the weekend, according to a Bloomberg report.

For AT&T, too, the biggest risk of streaming growth is that it could promote more cord-cutting -- a phenomenon that is dragging on the company's DIRECTV unit. In the third quarter, revenue attributable to its entertainment segment (which includes DIRECTV) was down by 10.2%. Despite that significant drop, management noted that it would have grown its overall top line year over year if not for the effects of the pandemic.

However, the real long-term opportunity for AT&T lies outside of its media-related properties. 5G technology will open up new ways for AT&T to monetize its wireless network, ranging from autonomous vehicle connectivity to lightning-fast video streaming.

In addition, AT&T stock now trades at a low price-to-sales ratio of 1.2, a forward P/E of 9, and its dividend at current share prices yields a massive (and safe) 7%.

The winner: Disney for growth; AT&T for yield

Despite the short-term headwinds Disney faces due to cord-cutting, its deep catalog of content and intellectual property will allow it to effectively transition to the post-bundle world. Its stock valuations are temporarily stretched due to the way COVID-19 has impeded its earnings, but those should come back in line with historic norms once the pandemic passes and its theme parks come roaring back.

While the exploding costs of contracts for live sports content will continue to weigh on its returns, Disney will be well-situated to offset that expense in a post-pandemic world. Although I do expect slower growth in its international and direct-to-consumer segments, I also expect operating losses will continue to narrow as they did in the fourth quarter.

However, the market is too bearish on AT&T at this point. HBO Max will eventually attract a substantial subscriber base and DIRECTV will start being less of a drag on results. I personally own AT&T stock as a safe income play, and expect the company to keep distributing those hefty dividend payments for years to come.