The U.S. Government, led by the Federal Trade Commission (FTC), has filed a lawsuit against Facebook (NASDAQ:FB), claiming that Facebook is an illegal monopoly that should be remedied -- possibly through a break-up.

This would seem like a negative development for the social media company, which owns several popular internet platforms including Facebook.com, Instagram, and WhatsApp. However, a break-up of Facebook could actually unlock some of the value hidden inside the company's conglomerate structure.

In the government's lawsuit, the FTC has accused Facebook of anti-competitive behavior and dominance within the social media platform and the digital marketplace. According to FTC Bureau of Competition Director Ian Conner, "[O]ur aim is to roll back Facebook's anticompetitive conduct and restore competition so that innovation and free competition can thrive." It seems as though the FTC believes the company is beginning to show signs of becoming a monopoly, which goes against what the government wants.

The FTC believes that Facebook is suppressing competition in its industry by preventing competition from developing in the first place. Front and center are Facebook's acquisitions of Instagram and WhatsApp. The theory goes that the primary reason Facebook acquired these companies was to prevent them from challenging Facebook's dominance in social media. Perhaps if Facebook had not acquired Instagram in 2012, it would not have as much market share in online advertising.

Take Snap (NYSE:SNAP), the company that owns popular app Snapchat, as an example. In 2013, Facebook offered to acquire Snap for $3 billion, which Snap refused. Instead, Snap went on to become public on its own, and the two companies have competed fiercely ever since. Today, the market capitalization of Snap is nearly $80 billion.

The prosecutors want to remedy Facebook's alleged monopoly position by separating its key assets. Namely, the regulators would like to see Facebook.com, Instagram, and WhatsApp operated as separate companies, which they believe would limit the overall market power the company wields.

Why a break-up could be bullish

The logic behind why a break-up could be good for Facebook is primarily underpinned by valuation. By most conventional metrics, Facebook trades for the lowest valuation multiples of its peers. The chart below shows that on an enterprise value (EV) to revenue metric, Facebook trades for less than nine times, where Pinterest (NYSE:PINS) and Snap trade for more than double the multiple of revenue. 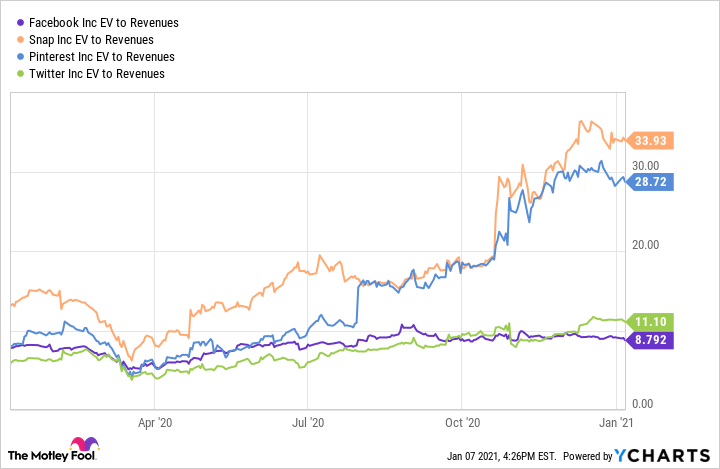 Pinterest and Snap are not yet profitable, but comparing Twitter's enterprise value to EBITDA shows that it trades for a much higher multiple of earnings compared to Facebook as well. 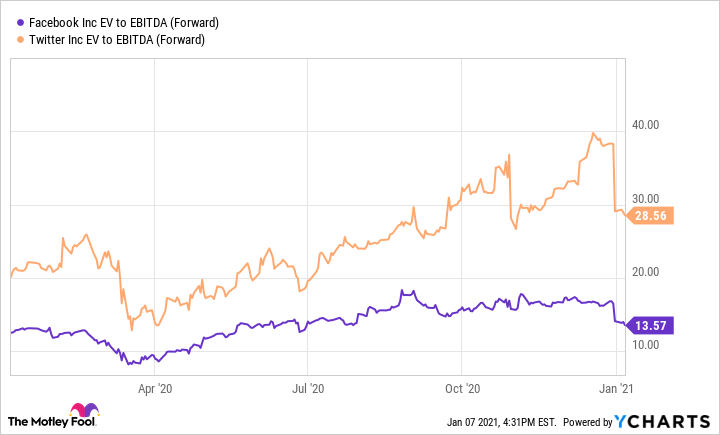 It is difficult to know for sure why Facebook trades for such a low valuation multiple compared to peers, but there are some theories.

First, Facebook is a conglomerate of several different platforms, which makes it more difficult to value -- and therefore investors put a discount on the valuations they use.

Second, Facebook is a combination of slower-growing Facebook platform and faster-growing Instagram and WhatsApp. Investors generally put lower valuation multiples on slower-growing businesses and may be giving the overall company a lower multiple because the slower growth at facebook.com hides how fast the growth at Instagram or WhatsApp may be.

Finally, with a total market capitalization exceeding $700 billion, Facebook may simply be too large for enterprising investors to find it attractive. The law of large numbers would suggest that Facebook can only grow to be so much bigger, and therefore investors may be discounting the value of Facebook due to its already large size.

This all suggests that Facebook could be worth more if the FTC succeeds in separating its assets. Perhaps the faster-growing Instagram and WhatsApp could trade for much higher valuations -- similar to Snap -- and investors may find the core Facebook app more attractive as a stand-alone company.

Not clear what will happen

It is interesting to speculate on what could happen with the FTC lawsuit and what the resulting effect could be for Facebook's stock. The reality is that the FTC may not succeed in its lawsuit -- or it could succeed to a degree and find a remedy other than a break-up. However, it is comforting to know that if Facebook is ultimately broken up, it may not be all that bad for shareholders.