Please ensure Javascript is enabled for purposes of website accessibility
Log In Help Join The Motley Fool
Free Article Join Over 1 Million Premium Members And Get More In-Depth Stock Guidance and Research
By Trevor Jennewine - Jan 19, 2021 at 10:53AM

These two tech companies are competing for your viewership.

Among its many adverse effects on the broader economy, the coronavirus pandemic has accelerated the shift away from traditional paid TV. A recent eMarketer study suggests roughly 6.4 million households cut the cord in 2020.

As the two leading streaming platforms in the U.S., both Amazon (AMZN 2.57%) and Roku (ROKU 7.11%) have benefited from this trend and investors have taken notice. In 2020, Roku's stock price jumped 148% and Amazon's price gained 76%. Not all of those price gains are related to the loss of cable subscribers, but the trend definitely contributed to investor confidence toward these two companies.

But which of these companies is the better buy today?

Amazon and Roku both sell various streaming devices and license their operating systems to smart TV manufacturers, but these companies primarily monetize their streaming platforms through digital advertising. This means metrics like market share, active accounts, and streaming hours are important -- as those numbers increase, these streaming platforms become more attractive to advertisers, which should drive revenue growth. 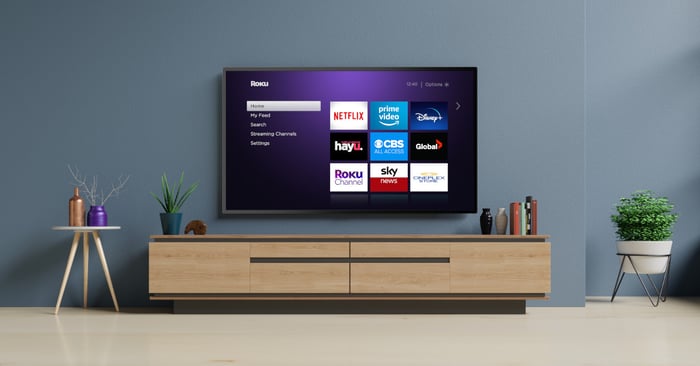 Accordingly, based on eMarketer's research, Roku currently leads the U.S. market with an estimated 47% of CTV viewers using a Roku device in 2020. The research firm also believes this trend will continue, and that by 2022, Roku will control more than half of the market. By comparison, Amazon Fire TV currently takes second place with a roughly 36% share of the CTV viewing market.

Additionally, Amazon's presence in the retail space means many companies are unwilling to sell its Fire TV products. For instance, Walmart (the largest retailer in the world) does not list any Amazon products on its website, though shoppers have access to a wide range of Roku players and smart TVs. This could be a limiting factor in Amazon's ability to compete with Roku.

In terms of active accounts, Amazon and Roku have been neck and neck for several years, but Roku may be pulling ahead. In December 2020, Amazon indicated that Fire TV "exceeded 50 million" monthly active users, while Roku reported 51.2 million active accounts. More importantly, Roku is the market leader in terms of streaming hours, indicating a higher level of user engagement. From that perspective, Roku's platform is more attractive to advertisers. This is a huge advantage for Roku, and it should help the company capture an increasing portion of digital ad spend in the coming years.

Roku also benefits from its content-agnostic platform. Unlike Amazon, Roku does not produce its own premium streaming content. From a user perspective, this means Roku is more likely to treat all content equally. By comparison, Amazon may prioritize more profitable content -- in fact, according to The Wall Street Journal, the company has already employed a similar tactic in its marketplace search results. While this could boost revenue in the short term, it would likely create a worse user experience in the long run. Again, this is an advantage for Roku.

However, Amazon has advantages, too. As the leading e-commerce marketplace in the U.S., Amazon has undoubtedly collected more consumer data than Roku, which may help marketers better target their ad campaigns. Moreover, Amazon's push into streaming media is just a small sliver of the company's top line, meant to supplement its core businesses of digital commerce and cloud computing. These two segments generated the lion's share of Amazon's $348 billion in revenue over the trailing-12-months -- that's 230 times more than Roku's sales in the same period. That astonishing spread gives Amazon a lot of firepower, enabling the company to outspend rivals like Roku. Additionally, while streaming media is Roku's gateway into the digital advertising market, Amazon has other content platforms that fill this purpose and the company would be just fine without Fire TV.

Shares of Amazon currently trade at a 4.6 times sales and a relatively pricey 92 times earnings. But if Amazon's valuation looks rich, Roku's is astronomical. The company is not profitable on a trailing-12-month basis, and its stock currently trades at 32 times sales. In other words, investors have high expectations for this company, and Roku's share price reflects that.

The digital advertising market is big and getting bigger, leaving plenty of room for both Amazon and Roku to be long-term winners as stocks. But if I had to pick one today, I'd go with Roku. Despite Amazon's sheer dominance in several different industries, I think Roku's smaller size and stronger competitive position (as a streaming platform) gives the company more potential stock price upside. That being said, investors should by no means dismiss Amazon as a real threat. The cloud titan has much more cash on its balance sheet, not to mention the leading online marketplace in the U.S., both of which make Amazon a fierce competitor.

Going forward, investors should pay attention to both Amazon's and Roku's ability to grow market share and engage new users. When all is said and done, the company with the most compelling value proposition for advertisers will win this race.