Please ensure Javascript is enabled for purposes of website accessibility
Log In Help Join The Motley Fool
Free Article Join Over 1 Million Premium Members And Get More In-Depth Stock Guidance and Research
By Trevor Jennewine - Jan 27, 2021 at 8:15AM

These two tech companies are battling for a growing pool of digital ad dollars.

In 2019, digital advertising first surpassed traditional print ads in popularity, as marketing dollars followed consumers onto mobile apps, social media, and smart TVs. Both Alphabet (GOOG -1.29%) (GOOGL -1.34%) and Roku (ROKU -2.76%) have benefited from this trend, with Alphabet's stock price up 82% and shares of Roku surging 717% in value since 2018.

In the coming years, digital ad spend should continue to grow quickly -- reaching $526 billion globally by 2024, according to eMarketer -- and both companies are well-positioned to benefit. But where should investors put their money today?

Alphabet is best known for its Google business, which leverages the company's market-leading search engine and content platforms like YouTube to rake in digital ad revenue. 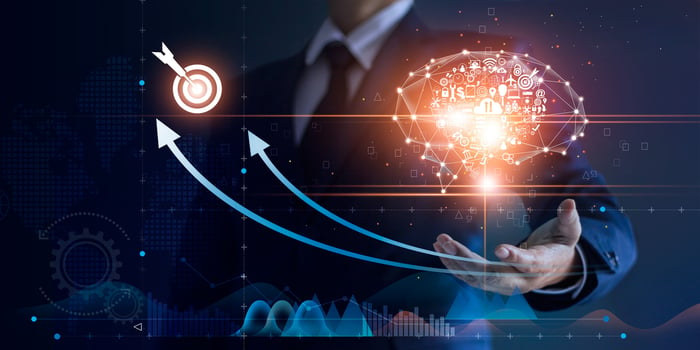 Google's ad tech platforms -- like Google Ads and Google Ad Manager -- facilitate the buying and selling of digital ad inventory both on and off Google-owned properties. In fact, the Google Display Network (Google's network of partner sites) includes over 2 million websites, mobile apps, and videos that reach over 90% of internet users. That incredible reach has made Google an essential part of many enterprises' marketing strategies, propelling the company to the top of the U.S. digital ad market -- though its market share has dropped in recent years due to competition with rivals like Amazon and Facebook.

Alphabet also earns a growing portion of revenue from cloud services. Despite intense competition, Google Cloud Platform (GCP) is gaining market share and currently ranks third globally behind Amazon Web Services and Microsoft Azure. Over the trailing 12 months, Google's cloud business generated $11.8 billion in revenue, a 191% increase from 2017. While that figure still pales in comparison to Google's ad revenue of $139 billion, the strong growth and share gains in the cloud computing market are a good sign for the company's future.

Roku also generates the majority of its revenue through digital advertising. However, unlike Alphabet, Roku has its roots in streaming media. The company's popular streaming platform (sold as individual devices and smart TVs) leads the U.S. market in terms of active users and streaming hours. Like Google's dominance in search, Roku's leadership position gives the company an advantage.

But Roku doubled down on digital advertising in 2019, when the company acquired Dataxu for $150 million. This merger integrated Dataxu's programmatic ad-buying tools with Roku's first-party viewer data. And in 2020, Roku announced the rebranded OneView advertising platform.

This new ad tech platform helps the company in two ways. First, it allows Roku to monetize ad inventory sold by other publishers. In other words, Roku now profits whenever marketers use OneView to buy ad space, regardless of who owns the inventory. Second, it strengthens Roku's advertising capabilities beyond connected TV. With Roku's OneView platform, marketers can launch and measure targeted ad campaigns across OTT (connected TV), desktop, and mobile devices, reaching four out of five homes in the United States.

There's still one more piece to the puzzle: Media content. Roku's ad business is further strengthened by the company's ability to add new content, both subscription services like AT&T's HBO Max and Comcast's Peacock, and ad-supported media on The Roku Channel and other AVOD (ad-supported video on demand) channels. This creates a flywheel effect: As Roku's content selection expands, more consumers are incentivized to use Roku devices, which in turn makes Roku more valuable to marketers. Ultimately, this flywheel effect helps Roku capture more digital ad spend, and it should continue to be a powerful growth engine in the years ahead.

Google's dominance in the search and advertising markets has raised concerns, and regulators are using words like monopoly and illegal. At this point, the company has been accused of wrongdoing in several lawsuits, including those filed by the U.S. Justice Department and numerous U.S. states.

More recently, according to The Wall Street Journal, Google found itself in conflict with the Australian Parliament, which is trying to impose rules that would require tech companies to pay local media publishers for linking to news articles. Google has countered by threatening to pull the plug on its search engine in Australia.

The end result of these cases is yet to be determined, but investors should pay close attention as events unfold -- the outcome could have an enormous effect on Alphabet's core business and future prospects.

Both of these tech companies have strong growth strategies and well-established advantages, but at eight times sales, Alphabet trades at a more reasonable valuation than Roku's 34 times sales. However, Alphabet's market share losses and legal troubles may ultimately limit the upside for investors. Moreover, the company has already achieved a market cap of $1.3 trillion -- it's hard for me to imagine it's stock as a potential five-bagger at this point.

By comparison, Roku's faster growth and greater presence in the streaming market give the company an advantage. While search still accounts for the majority of digital advertising today, connected TV ad spend is growing much more quickly. That should launch Roku's business to new heights in the coming years.