Please ensure Javascript is enabled for purposes of website accessibility
Log In Help Join The Motley Fool
Free Article Join Over 1 Million Premium Members And Get More In-Depth Stock Guidance and Research
By Billy Duberstein - Feb 7, 2021 at 7:00AM

These top picks are all in one specific sub-sector of the massive 5G megatrend.

Just as 4G wireless ushered in a new era of smartphones and mobile applications on which we have come to depend, the new 5G wireless standard promises even more exciting innovation in the decade ahead. 5G enthusiasts predict faster, more secure, and higher-capacity communications, paving the way for new AR/VR applications, more sensor-based automated vehicles, factories, and agriculture, and other new-age apps we can't even think of.

The need to power all of these applications is spurring massive demand increases for next-generation chips. Yet my top three 5G stocks right now aren't semiconductor producers or designers themselves, but rather the key "picks nd shovels" tools semiconductor foundries use to make those chips. Here's why this sub-segment is my favorite way to play 5G right now. 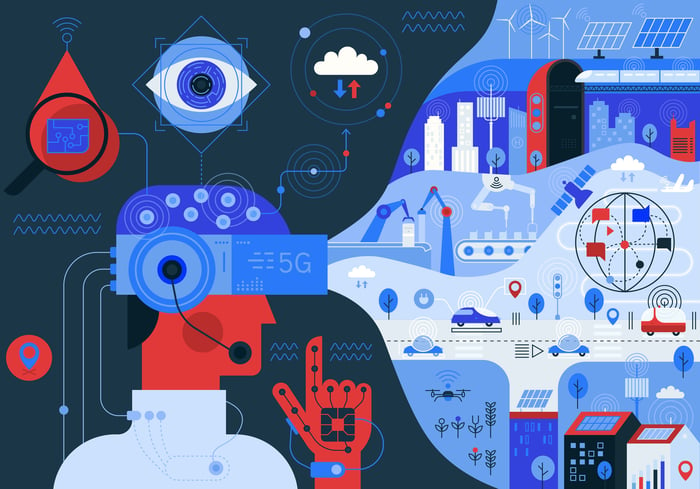 You can think of Lam Research (LRCX 6.84%) and Applied Materials (AMAT 4.78%) as the "Coke and Pepsi" of semiconductor etch and deposition equipment. Both companies make tools that etch, or strip away, materials on on imprinted wafers, as well as the tools that lay down the conductive materials that make up today's leading-edge chips.

In distinguishing between the two, Applied is a bit more diversified, as it also has some metrology and inspection tools, and also makes tools for OLED displays. Lam Research is a bit more specialized, and makes especially important tools for 3D stacking in NAND memory. Still, both companies serve semiconductor foundries, as well as both DRAM and NAND. There are hundreds of steps in the production of leading-edge chips, so there is really room for both companies to command their own steps in the process.

Why do I love both these companies? Three reasons. First, the outlook for their tools is bright. Not only is semiconductor demand ramping higher for the foreseeable future, but the more advanced the chip, the higher the capital intensity associated with making that chip. Therefore, a lot of the dollars from the 5G super-cycle should flow from the chipmakers to these companies.

Second, the etch and deposition industry has consolidated to just a handful of companies, forming an oligopoly that will be hard to displace. After all, if you are a chipmaker spending billions on your plant, you aren't going to want to cheap out on these mission-critical tools. An error in a semi manufacturing line can affect yield and prove tremendously costly. Both Lam and Applied have also leveraged their massive amounts of data into value-add services they sell to chipmakers in order to improve yields and limit mistakes. These high-margin services, which tend to grow with the installed base (and not lumpier annual machine sales), accounted for 24% of Applied Research's sales last year and 33% of Lam Research's sales last quarter.

Strong competitive positions and high-margin services make for some excellent profitability and cash generation. Applied's operating margins are 26% and its return on equity is 38.5%. Lam Research's operating margin is 28.7% and its return on equity is an eye-popping 60%. Remarkably, neither of those two ROE figures factor in any debt, as both companies are roughly net cash neutral.

Finally, both stocks are quite cheap relative to many other tech stocks and even other popular chip stocks. Both companies trade for just under 20 times this coming year's earnings estimates. That's below the 22 forward P/E multiple of the S&P 500, despite these two being better-than-average businesses. Furthermore, given the massive increase in capital expenditures recently announced by customers Taiwan Semiconductor Manufacturing and Samsung, I wouldn't be surprised if both Applied and Lam handily beat analyst estimates this year.

Both stocks have pulled back in the last couple of weeks after huge runs following the November election, but I think the slight pullback is an opportunity for long-term investors. While some may anticipate the end of the current chip boom later this year, I tend to think the current uptick will be more durable and lasting, especially given the 5G megatrend. And if these stocks stay here or fall further, both Applied and Lam generate significant cash flow with which to repurchase stock and raise their dividends anyway.

Another way to play both Applied Materials and Lam Research is to buy small-cap peer Ichor Holdings (ICHR 8.32%). Ichor is a $1.1 billion market cap company that makes fluid and gas delivery subsystems which go inside both Applied and Lam machines. In fact, last year, Lam and Applied made up 51% and 33% of Ichor's sales, respectively.

While Ichor's business is less differentiated and makes lower margins than Applied and Lam, the stock is also cheaper, at around 12.5 times this year's earnings estimates. Last week, the company reported strong 29% growth and earnings per share of $0.51, both well ahead of estimates, while expanding margins throughout the year.

Of note, Ichor just raised money in December through a small equity offering, which is a bit concerning given that its stock isn't all that expensive. However, Ichor has grown a lot via acquisitions in the recent past, so another consolidative move could be forthcoming.

As a small cap, Ichor may not be on your immediate radar as a 5G play, but it sure looks like a value investor's way to play the growth in semiconductor equipment manufacturing from the 5G boom.

This Dirt-Cheap Semiconductor Stock Could Skyrocket in the Long Run

Are These Semiconductor Stocks Shielded From Boom and Bust Cycles?