Please ensure Javascript is enabled for purposes of website accessibility
Log In Help Join The Motley Fool
Free Article Join Over 1 Million Premium Members And Get More In-Depth Stock Guidance and Research
By Adam Levy - Feb 9, 2021 at 8:26AM

One analyst says Disney should buy out Comcast's Hulu stake this year.

In 2019, Comcast (CMCSA 2.68%) made a deal with Walt Disney (DIS 1.84%) to cede control of Hulu in exchange for a put/call option on its 33% stake in the company in 2024. The deal gave Comcast the option to sell its stake in Hulu to Disney at a minimum valuation of $27.5 billion in early 2024. Disney, likewise, had the right to buy out Comcast's stake at the same valuation.

But one analyst thinks the two media companies should settle things right now. Lightshed analyst Rich Greenfield thinks both Comcast and Disney could benefit from closing the sale of Hulu in 2021 instead of waiting until 2024. 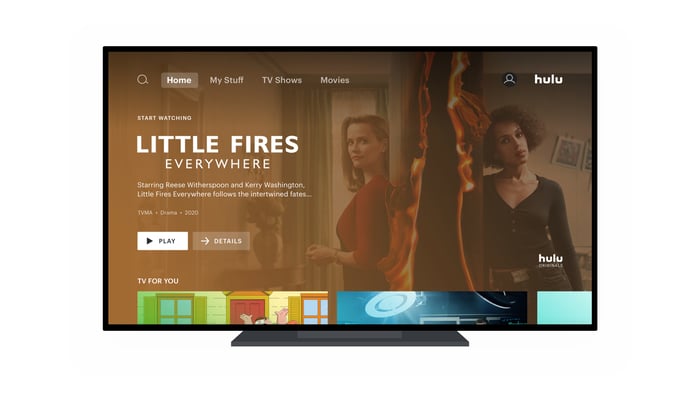 In 2019, when Disney made the deal with Comcast, Disney was projecting Hulu to turn profitable in either 2023 or 2024. It expected the service to have between 40 million and 60 million subscribers by that point.

But with the influx of streaming subscribers in 2020 and the success of the Disney+ bundle with Hulu and ESPN+, Disney had to refine its outlook. It now expects Hulu to reach profitability in 2023, and for the service to have between 50 million and 60 million subscribers in 2024. In other words, Hulu will be much more valuable in 2024 than Disney originally projected.

In fact, Greenfield thinks Hulu's already worth $45 billion today based on its 32.5 million on-demand subscribers and 4.1 million live TV subscribers. As a result, he says: "Waiting until 2024 to resolve ownership would appear to create an unwanted/unnecessary financial overhang on Disney given how fast the valuation of streaming assets are growing."

Indeed, Disney has already shown signs of hamstringing Hulu's growth to a certain degree. Instead of using the Hulu brand to expand its general entertainment streaming service internationally, it used the Star brand, and integrated it into Disney+ in most regions. Disney may want to produce similar integrations between Disney+ and Hulu in the U.S., but Comcast's stake in the latter makes that maneuver more complicated.

On the other hand, not buying out Comcast immediately gives Disney greater financial flexibility at a time when it needs it most. At Greenfield's valuation, Disney would need to come up with $15 billion. While Disney ended 2020 with $17.9 billion in cash and equivalents on its balance sheet, it also raised debt, suspended its dividend, and committed to more spending on Disney+ last year. Paying up for Hulu while the outlook of its valuable parks and film businesses are uncertain may be unappealing.

Comcast launched Peacock in 2020, a streaming service that has a lot in common with Hulu. They both offer subscriptions subsidized by advertising, and they both have a lot of the same NBCUniversal content on them. As part of the 2019 deal, Comcast agreed to continue licensing NBCUniversal content to Hulu until 2024.

With a lot of the same content available on Hulu, it could be limiting the number of households that actually pay up for a Peacock subscription. (There's a limited free tier of the service.) While management says 33 million people have signed up for Peacock, it hasn't provided any information on how many pay for a subscription.

Comcast may offer favorable terms for the sale of Hulu to Disney in exchange for getting out of its licensing arrangement early. That could make Peacock the exclusive home to several popular titles, and drive subscription revenue for the company.

Additionally, an influx of billions of dollars could bolster its balance sheet, enable it to invest in streaming efforts like Peacock or its Flex platform, pay down debt, or return more cash to shareholders. Of those, only upping its investment in streaming has the ability to outpace the potential returns from keeping its Hulu stake. That said, it certainly comes with additional risks.

An early resolution to Comcast's and Disney's 2019 Hulu deal could be beneficial to both companies, but there are a lot of considerations on both sides that may prevent it from happening. Ultimately, investors should want to see both companies take greater control over their streaming assets, and that won't happen until they close the Hulu deal. At that point, neither media company will be reliant on the other for the content or operations of their direct-to-consumer platforms.