Please ensure Javascript is enabled for purposes of website accessibility
Log In Help Join The Motley Fool
Free Article Join Over 1 Million Premium Members And Get More In-Depth Stock Guidance and Research
By Billy Duberstein - Feb 15, 2021 at 6:45AM

Solid businesses with high and growing dividends are a recipe for sound retirement.

Those in retirement have likely struggled to find promising risk-rewards in the market today. A decade of ultra-low interest rates, plus a lot of technological disruption, have enabled growth stocks to shine. Meanwhile, reasonably priced dividend stocks have had it tougher. Those companies are usually the targets of said disruption, and the pressure to pay out high dividends can limit reinvestment in their businesses.

However, there are cases of high-dividend stocks out there that also have defensive business models and strong growth prospects. You may just have to look a little bit harder.

Today, Brookfield Infrastructure Corporation (BIPC 1.18%), Bank of America (BAC -1.71%), and Crown Castle International (CCI 2.14%) not only pay out solid dividends, but they also have defensible competitive positions, with a path to raise those dividends over time. Here's why each of these stocks are well worth a retiree's attention today. 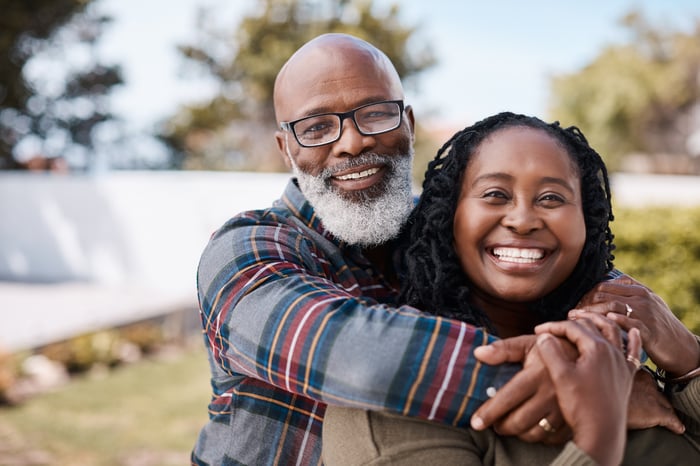 Brookfield Infrastructure, as its name suggests, owns infrastructure assets globally, across utilities, transportation, midstream energy, and data infrastructure. Despite the plunge in energy demand and global trade this year amid COVID, Brookfield's funds from operations (FFO) still grew 5% in 2020. In fact, the company just raised its 3%-yielding dividend by 5% as well.

That shows the resiliency of the company's assets. The transportation segment, which is very sensitive to global trade, only saw a slight decline, and midstream energy actually grew. Utilities declined, but that was entirely due to the depreciation of the Brazilian real; outside of that, the utilities segment would have grown 6%.

The star grower, however, is the data segment, which grew FFO 44%. While the data segment only made up 13.4% of the company's total FFO, its high growth and favorable prospects in the age of 5G should enable Brookfield to maintain or even accelerate its growth rate in the years ahead.

Meanwhile, President Biden is reportedly wooing lawmakers on a large infrastructure bill, which is the next legislative priority after the American Rescue Plan. Since these projects can be very expensive, more public-private partnerships with companies like Brookfield could be in the offing.

Looking to play the growth of 5G infrastructure more directly? Crown Castle International is a 3.3%-yielding real estate investment trust that develops and owns towers, small cells, and fiber assets for the deployment of wireless communications across the U.S. Crown Castle builds these assets and then collects rent from leading telecom companies, which will put their 5G radios on Crown Castle's assets.

The company just raised its dividend by 11% in December, and targets 7-8% growth over the long-term. That will be fueled by the growth in 5G. In the recent fourth quarter earnings release, CEO Jay Brown said:

We believe our unique portfolio of assets positions us to benefit from what we expect will be a decade-long investment cycle as our customers deploy 5G, extending the opportunity we see to create long-term value for our shareholders while delivering dividend per share growth of 7% to 8% per year.

Crown Castle also just inked a deal with Verizon (VZ 0.88%) for 15,000 small cells, increasing its backlog heading into 2021. That's on top of a recent 20,000-towers deal with DISH Network (DISH 1.32%) inked in November to facilitate DISH's new effort to build out a virtualized 5G network from scratch.

Unlike many tech and 5G-related stocks, Crown Castle's stock hasn't done much in the past year, as consolidation in the sector caused a de-commissioning of many Sprint towers. However, as the 5G deployment kicks into high gear after the recent C-band spectrum auction, Crown Castle could be primed to rise once again.

Finally, with COVID-19 vaccines rolling out, the federal government likely to pass more stimulus soon, and the Federal Reserve keeping short-term rates low for the foreseeable future, the economy could be in for higher growth and perhaps higher interest rates later this year and into 2022. That could be very good for bank stocks.

In particular, Bank of America is one of the "big four" U.S. money center banks and Warren Buffett's favorite. Since the financial crisis of 2008, CEO Brian Moynihan has positioned BofA as a low-risk bank, mostly lending to prime customers. Although it is diversified with investment banking and sales and trading, Bank of America is a bit more skewed toward straight-up lending and the yield curve. Therefore, a steeper yield curve would likely help Bank of America more than other banks with more emphasis on trading and investment banking.

Bank of America's results took a hit this year, but really, it was fairly mild. Revenue only dipped 6% despite a huge decline in economic activity. Pre-tax, pre-provision income only declined 17% and remained at highly profitable levels. And Bank of America began releasing reserves in the fourth quarter, so there could be even more reserve releases in 2021 if credit holds up.

In fact, banks have held up so well that the Federal Reserve recently allowed major banks to resume share repurchases in 2021. That should certainly help, as Bank of America still trades at a reasonable 1.1 times book value. It should also lead to a resumption of BofA's dividend growth, which stands at a 2.2% yield today.

With a defensive lending posture well-positioned to ride an increase in interest rates, Bank of America remains another great choice for retirees today.