Please ensure Javascript is enabled for purposes of website accessibility
Log In Help Join The Motley Fool
Free Article Join Over 1 Million Premium Members And Get More In-Depth Stock Guidance and Research
By Reuben Gregg Brewer - Mar 17, 2021 at 8:45AM

If you are looking at steel makers, you have to seriously consider this industry giant. But is it worth buying today?

But does this impressive run make Nucor a buy? Here are four things to consider about this company before you pull the trigger.

1. Nucor is an industry leader

Nucor lays claim to being the largest and most diversified steelmaker in the United States. It has the No. 1 or 2 positions in 11 steel categories and is the nation's largest recycler (scrap is a key steelmaking input for the company). Its 25 mills have the capacity to create 27 million tons of steel a year. 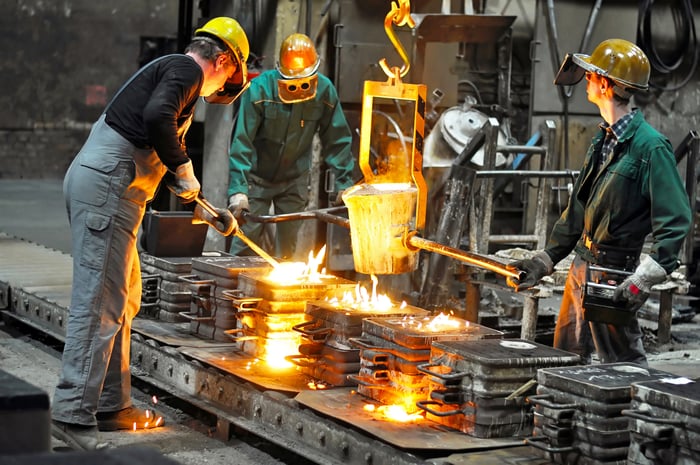 Its size isn't an accident: Nucor has a conservative approach focused on building scale and efficiency in the steel industry niches where it chooses to operate. Notably, it uses a unique profit-sharing model that incentivizes its employees to make small changes that add up to big process improvements over the long haul. And it has a stated goal of being at the top of whatever business it's in, so there's no question about what it or its employees are aiming for.

2. Nucor has the best technology

Another important factor here is that Nucor uses electric arc mini-mills, which are, to simplify things, easier to ramp up and down than older blast furnaces when product demand waxes and wanes. Essentially, Nucor is using the most modern steel-making techniques, and that gives it an edge. That edge has long shown up in its operating margins, which tend to be toward the high end of the industry in both good markets and bad ones. To be fair, it isn't the only company with this focus. Competitor Steel Dynamics, founded by former Nucor employees, also uses electric arc mini-mills. And other industry players, like industry icon U.S. Steel, are increasingly looking to the technology. So this isn't a completely differentiating factor, but it is one that's quite important to keep in mind.

Perhaps one of the most exciting things about Nucor, however, is that it has increased its dividend for 48 consecutive years, making it a Dividend Aristocrat. There are a couple of things to take from this fact. First, the company clearly believes that rewarding investors with regular dividend hikes is highly important. Second, despite operating in a cyclical industry, management is conservative enough to keep hiking the dividend even when times are tough. To put some numbers on that conservatism, Nucor's debt-to-equity ratio is the lowest among its peer group, and its ability to cover its interest expenses is among the best in the industry. 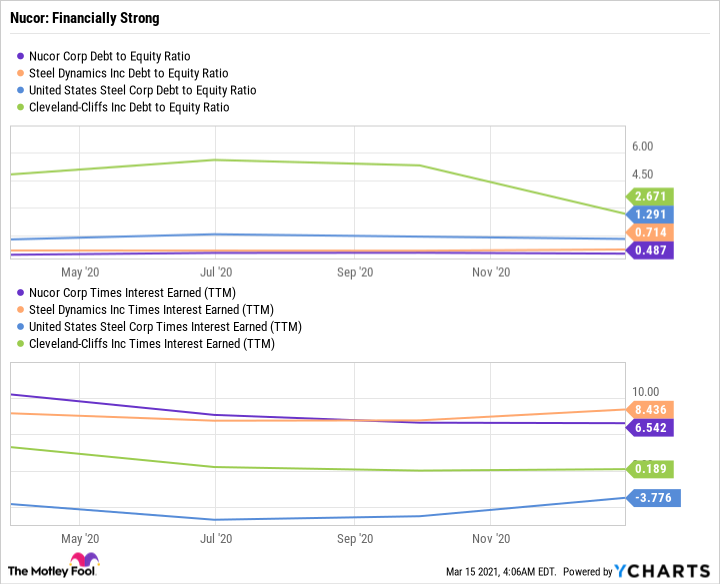 Like its goal to be an industry leader, fiscally conservativism is a long-term focus. Nucor takes deliberate steps to keep its balance sheet strong so it can invest for growth even during industry downturns. In fact, when it comes to capital allocation priorities, investing in profitable growth is No. 1, with regular dividend growth a close second.

4. Nucor is a cyclical business

In that last point, an important word was mentioned: "cyclical." The steel industry tends to rise and fall along with the broader economy. And, as you might expect, Nucor's stock rises and falls in a similar fashion. That brings the story back to the dividend, since yield can be used as a rough gauge of valuation.

Today Nucor's dividend yield is 2.3%. That's toward the low end of its range over the past decade or so. In fact, that yield is pretty close to the lowest it has been over that span, suggesting that the steel maker's share price is pretty high today. 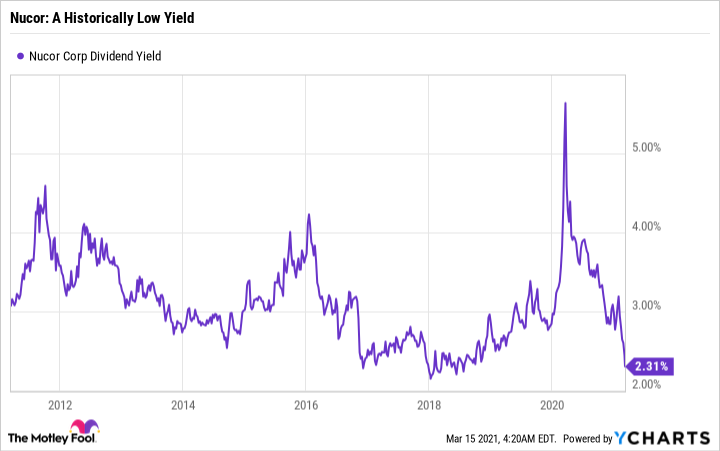 That changes the investment equation. Nucor is a great company that values its investors, but today it is trading at what looks like a high price. That's not a particularly compelling investment story.

There are a lot of very good reasons to like Nucor, only four of which have been discussed above. But investors are aware of these facts, and, given the expectations for an economic upturn, have priced in a lot of good news here.

Right now most investors would probably be better off putting this steel industry bellwether on their wish lists rather than their buy lists. That said, given the cyclical nature of the sector, there's likely to be an opportunity to jump in at some point in the not-too-distant future.