Please ensure Javascript is enabled for purposes of website accessibility
Log In Help Join The Motley Fool
Free Article Join Over 1 Million Premium Members And Get More In-Depth Stock Guidance and Research
By John Rosevear - Apr 8, 2021 at 11:00AM

The Blue Oval's renewed focus on SUVs and Lincolns is paying off in China.

Ford Motor Company (F 1.65%) said today that it sold nearly 154,000 vehicles in China in the first quarter, up 73% from a year ago, as the company continued to rebound from business missteps and the COVID-19 outbreak in early 2020.

Ford's sales in China have now increased year over year for four straight quarters, a sign that the turnaround plan implemented by the company's China chief, Anning Chen, is taking hold.

Chen joined Ford from Chinese automaker Chery Automobile in October of 2018, after several quarters of sales declines. Chen's aim since taking the reins has been to overhaul Ford's products and business to better align with Chinese consumers' expectations. He said that the growth streak is just a beginning.

"We intend to fully build on these four consecutive quarters of sales growth to meet rising Chinese consumer demand with our 'Best of Ford, Best of China' strategy," Chen said in a statement. 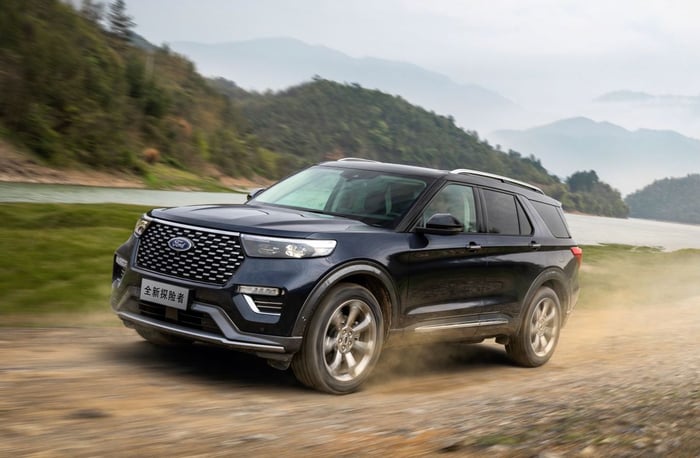 Most of Ford's product line in China would be familiar to Americans, but not all. The company has focused on sales of Lincoln luxury vehicles (particularly crossover SUVs) and familiar Ford-brand crossovers, with a few added models that are unique to the Chinese market.

The locally made Lincoln Corsair and Aviator SUVs helped drive a 217% year-over-year gain for the Lincoln brand, with sales of about 19,300. Ford-brand sales rose 44.7% as its SUV sales roughly doubled, led by the Explorer, Escape, and Edge, and a new China-only SUV model called the Equator.