Please ensure Javascript is enabled for purposes of website accessibility
Log In Help Join The Motley Fool
Free Article Join Over 1 Million Premium Members And Get More In-Depth Stock Guidance and Research
By Rekha Khandelwal - Apr 9, 2021 at 8:17AM

This trio offers investors an attractive mix of income and growth.

If you are looking to buy and hold stocks for the long term, you have a few choices. You can invest in growth stocks that usually grow their sales or earnings faster than the average rates. Though such stocks generally trade at premium valuations, they can generate market-beating returns over the long haul due to their high growth and promising prospects.

At the other end of the spectrum are income stocks, which are usually more mature businesses that can provide you with regular dividend income. Finally, some stocks offer a mix of both income and growth characteristics. Here are three stocks -- a growth, an income, and a third one that combines both -- that can generate attractive total returns for you in the long run.

Beyond Meat (BYND 6.03%) can be credited for bringing the niche of plant-based meat products market into focus. A leader and early mover in this segment, Beyond Meat continues to research and innovate to make plant-based meat taste more like real meat. The company received overwhelming response for its products, with sales rising 170% in 2018 and 239% in 2019, before falling to just 37% growth in 2020 due to the impacts of the pandemic. 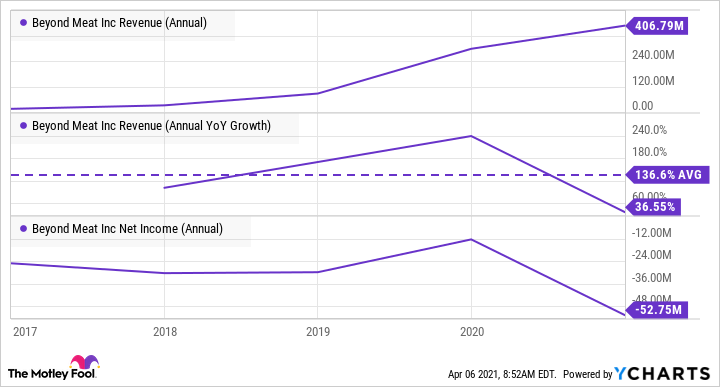 However, Beyond Meat is incurring losses. That's expected considering the company, which went public in 2019, is in its early growth stage right now. It looks poised to achieve profitability as it grows to scale. And Beyond Meat is looking to grow rapidly. The company has entered into partnerships with leading retailers including Costco Wholesale and Walmart to sell Beyond Meat products in their stores.

It has also entered into partnerships with leading restaurant chains including McDonald's and Yum! Brands to promote its offerings in their outlets. Recently, Beyond Meat also partnered with PepsiCo, which will help its innovative offerings reach a broader customer base.

A key threat to Beyond Meat's growth story is increasing competition. In addition to peers like Impossible Foods and Tattooed Chef, the company also faces competition from established companies with much bigger financial resources, such as Tyson Foods and Kraft Heinz. However, Beyond Meat has already carved out a place for itself in the plant-based meat segment. With its aggressive growth strategy, it looks poised to continue growing in this market.

A study by the University of Michigan suggests that the production process of a Beyond Meat burger generates 90% less greenhouse gas emissions than that of a quarter-pound of U.S. beef. It also requires 46% less energy, 99% less water, and 93% less land than a beef burger. In addition to being environmentally friendly, the company pitches health and animal welfare as key reasons to consider switching to plant-based meat.

Beyond Meat enjoys an early mover advantage in an industry that has a long runway. That makes it a promising growth stock to buy and hold for the long term.

While Beyond Meat offers promising growth, renewable energy company Brookfield Renewable (BEP -0.32%) (BEPC 0.25%) offers an attractive yield of around 2.9%, along with impressive growth prospects. Unlike many other renewable energy companies, Brookfield Renewable has a solid performance track record. The company grew its distributions at a compound annual growth rate of 6% over the last 20 years. 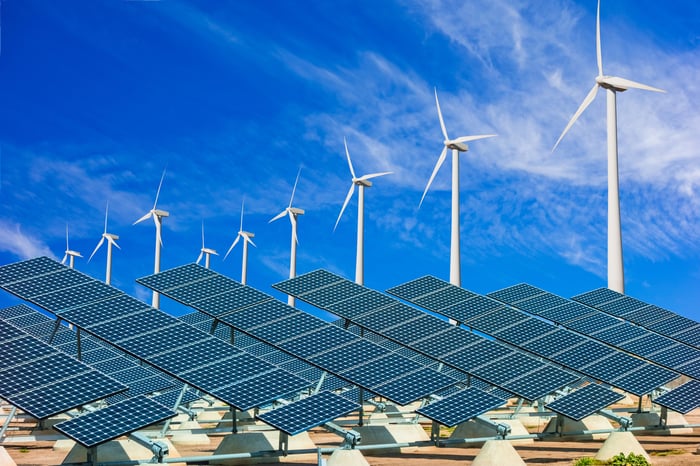 Brookfield Renewable aims to grow its per-unit funds from operations by 6% to 11% in the coming years. It also aims to deliver annualized total returns of 12% to 15% in the long term to its shareholders. The company's massive projects pipeline, which includes 23,000 megawatts of projects, should help it deliver this growth. For perspective, the company has 19,000 megawatts of projects operational right now.

As a top player in the clean energy segment, Brookfield Renewable is poised to benefit from the expected growth in the use of renewable energy sources. That makes it one of the best renewable energy stocks right now.

Enterprise Products Partners (EPD -1.62%) stock can give a substantial boost to your regular dividend income with an irresistible yield of 8%. Though the company has taken some small steps in the renewable energy by shifting a part of its own power use to renewable sources, it is basically into oil, gas, and liquids transport and storage. 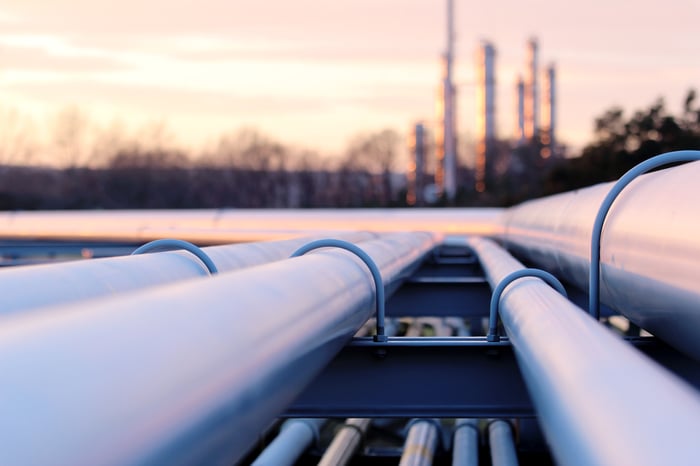 Enterprise Products Partners' huge asset footprint gives it a definite advantage over its smaller peers. Moreover, being in the midstream segment of the energy sector, the company is to a large extent cushioned from short-term commodity price fluctuations. Fee-based contracts account for more than 85% of the company's earnings.

Another key strength of Enterprise Products Partners is its rock-solid balance sheet. The company's debt-to-adjusted-EBITDA ratio of 3.5 is quite conservative and is one of the lowest among its peers. The company has $1.6 billion of growth projects sanctioned for 2021, which should support its earnings growth in the coming years. With 22 consecutive years of distribution increases, Enterprise Products Partners stock is a compelling buy.

Here's Why Beyond Meat Fell as Much as 10.8% Today