Please ensure Javascript is enabled for purposes of website accessibility
Log In Help Join The Motley Fool
Free Article Join Over 1 Million Premium Members And Get More In-Depth Stock Guidance and Research
By Keith Speights - Apr 9, 2021 at 11:00AM

Shares of Greenwich LifeSciences (GLSI -2.23%) were rising 4.3% higher as of 11:41 a.m. EDT on Friday after soaring as much as 38.2% earlier in the day. The gain came following the company's announcement of positive results from a phase 2b study evaluating immunotherapy GP2 in treating metastatic breast cancer.

Greenwich's final five-year immune response data from its phase 2b study of GP2 were published in an abstract at the American Association for Cancer Research (AACR) Annual Meeting. The drugmaker said these results support the previously reported 0% metastatic breast cancer recurrence rate over five years after patients received its immunotherapy. 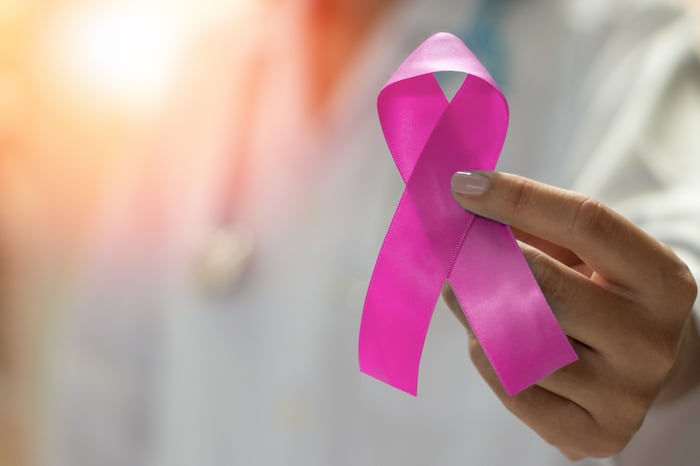 GP2 is currently the company's only pipeline candidate. Any bad news from clinical studies of the drug would be a big blow for the biotech stock. The AACR abstract supporting the previously reported data allowed investors to breathe a big sigh of relief.

Even better, Greenwich thinks the broad immune response seen in this phase 2b study could increase the likelihood that GP2 combined with Herceptin-based products could be effective in treating other cancers where HER2 proteins are expressed.

AACR will publish a poster with graphs showing detailed immune response data on Saturday morning. Greenwich's next big step is to advance GP2 into late-stage testing. The company said it plans to initiate a phase 3 study of the immunotherapy "using a similar treatment regime" as its phase 2b study.

1 Drug, 1 Mission: What Should Investors Expect for Greenwich Life Sciences?