Please ensure Javascript is enabled for purposes of website accessibility
Log In Help Join The Motley Fool
Free Article Join Over 1 Million Premium Members And Get More In-Depth Stock Guidance and Research
By John Ballard - May 9, 2021 at 9:48AM

The Motion Picture Association reported in March that streaming video subscriptions grew 26% to reach 1.1 billion worldwide last year. That's a huge tailwind for both established players and recent entrants to the streaming market.

Here are four top streaming stocks that investors should consider buying, or at least keep on a watchlist.

1. Netflix: This show is far from over

Shares of Netflix (NFLX 2.72%) are down 7% year to date after the company posted first-quarter subscriber numbers that came in below expectations. But this could be a good buying opportunity, since the deceleration in subscriber growth merely reflects more people choosing to sign up for a membership in 2020, which left fewer prospective members waiting on the fence.

There were plenty of indications in the first-quarter report that Netflix's growth story is far from over. Revenue grew 24% year over year, driven by higher average revenue per membership. The bright side is that the content production delays helped the company save some money, with operating profit reaching $1.9 billion.

That extra profit will inevitably finance more content, leading to more subscriber growth. Management expects to add more subscribers in the second half of the year as several hit series and new films launch on the service.

What's more, management stated it is getting "very close to being sustainably [free cash flow] positive," which will lessen the need for external financing to fund operations in the future.

With 208 million global paid subscribers, Netflix still has less than a 20% share of global streaming memberships. This top streaming stock may still be hitting new highs 10 years from now.

2. Discovery: Going on a streaming safari

Discovery (DISCK) (DISCA) is no longer stuck in the land of cable; it has taken its valuable networks to discovery+ -- it's new streaming service that debuted in January. It has plenty of valuable content to offer, including HGTV, Food Network, Discovery Channel, Animal Planet, among many others. Discovery had the most-watched domestic pay-TV lineup in the first quarter, which should lead to a promising future in streaming.

The stock more than doubled in value after the launch and now sits up 24% year to date. I believe investors were correct to send the stock price up to begin with, although the stock might have risen too far, too fast. Nonetheless, the growth from discovery+ should insulate the company from the declining market for cable, making Discovery's current price-to-free cash flow multiple of 9.5 look very attractive.

In Q1, Discovery's direct-to-consumer business reached 13 million subscribers. That growth more than offset the decline in advertising revenue in the U.S. market and pushed total revenue up 4% year over year in the first quarter. In the near term, management is confident that the recent strength of Discovery's content lineup will position it well to regain advertising growth.

Discovery's profitability will come under pressure as it ramps up content spending for streaming, but that's expected. The growth of discovery+ is a major catalyst that could send this media stock higher over the next few years. 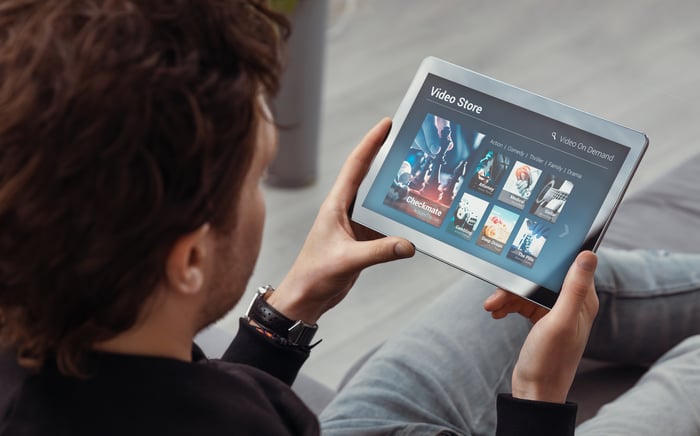 3. Roku: The toll bridge of the streaming services market

Roku (ROKU 3.92%) has been a hot stock in recent years. You don't see many stocks return 1,200% over a five-year period. Adoption for its TV operating system has been growing rapidly, as people cut the cord and turn to digital entertainment.

Roku's first-quarter earnings results showed total active accounts reached 53 million for an increase of 35% year over year. But total streaming hours are growing faster, up 49%. That is a clear indication of growing satisfaction and consumption with the content on the platform.

Most importantly, engagement is driving growth in advertising revenue. Average revenue per user grew 32% in the first quarter. A big part of Roku's ability to monetize its user base is The Roku Channel, which offers free ad-supported content and reached households totaling an estimated 70 million people in Q1.

As its Q1 results show, Roku is a promising play on the future of streaming, but the stock is expensive, trading at 22 times sales. That's much higher than Netflix's price-to-sales multiple of 8.7.

Growth could slow later this year as Roku faces tough year-over-year comparisons with the robust growth reported in 2020. Yet, management's second-quarter guidance calls for revenue growth of 73% year over year at the midpoint of the range, so anything is possible.

If the recent growth of other streaming services is any indication, Walt Disney (DIS 3.30%) should report another strong quarter for its direct-to-consumer segment when it reports fiscal second-quarter earnings on Thursday, May 13. Disney+ has already surpassed 100 million subscribers since launching in 2019, but the stock could also be a good reopening play on the economy.

Management is seeing a lot of pent-up demand for theme parks around the world. To drive traffic, Disney spent the pandemic moving forward with major investments in new attractions, including the upcoming Star Wars: Galactic Starcruiser hotel, scheduled to open at Walt Disney World in 2022. Theme parks are arguably the most direct-to-consumer part of the Disney empire, as CEO Bob Chapek has emphasized.

As for Disney+, expect a lot more Star Wars and Marvel originals very soon. Disney told investors in December that it has a total of 20 original series evenly split across the Marvel and Star Wars universes launching over the next few years, along with releases from Pixar and Disney studios. Content wins subscribers, and Disney will have plenty of it.

The stock is up 82% over the last year, but there could be more gains in store as Disney's theme parks reopen and its streaming services continue their march toward management's goal of at least 300 million subscribers across Disney+, Hulu, and ESPN+ by fiscal 2024.

What makes Disney stand out on this list is that it has many ways to monetize its entertainment properties outside of streaming. This opens more growth opportunities and makes Walt Disney the ultimate entertainment stock.