Please ensure Javascript is enabled for purposes of website accessibility
Log In Help Join The Motley Fool
Free Article Join Over 1 Million Premium Members And Get More In-Depth Stock Guidance and Research
By Rich Smith - Updated May 21, 2021 at 11:07AM

This morning, in an article titled "Pandemic Videogame Habits Might Be Hard to Break," The Wall Street Journal tried to make the case for investors returning to Activision Blizzard (ATVI 0.63%), Electronic Arts (EA -1.14%), and Take-Two Interactive Software (TTWO -1.30%). As the newspaper argued, "despite investor concerns, game habits formed during the pandemic could yet prove sticky," and the pandemic surge in stock prices in the videogaming sector could continue even after COVID-19 goes away. 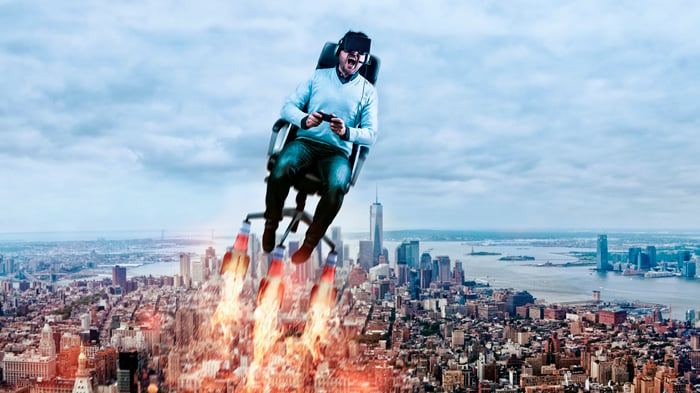 So far, at least, that doesn't seem to be working out as you'd expect. This morning, shares of Take-Two and EA are both up mere fractions of 1%, while Activision Blizzard is actually down half a percent. But Roblox? Roblox stock is soaring.

While it's kind of surprising that the companies actually mentioned in WSJ's piece aren't getting any investor love today, it's not really a surprise that Roblox is going up -- because the Journal's arguments make sense.

More than a year of staying at home, working from home, and learning from home has certainly given rise to an increase in at-home videogaming. The Wall Street Journal notes that over the past year, net bookings at each of the three big videogame companies have surged about 30%.

This vast increase in gaming could be a hard habit to break after things get back to normal. Take-Two CEO Strauss Zelnick, for example, predicts that the market for video games "will be notably larger going forward than it was pre-pandemic," for the simple fact that more people have been introduced to (and maybe hooked on) video games over the past year.

Long story short, The Wall Street Journal didn't think to mention Roblox in its story on the huge interest in video games this morning. But seeing as Roblox is actually one of the fastest growers in the sector, maybe it should have.