What chip shortage? Xpeng posted a nice deliveries gain in May.

Shares of Chinese electric-vehicle (EV) maker Xpeng (XPEV -1.16%) were trading higher on Tuesday, after the company reported that it was able to increase deliveries sequentially in May despite an ongoing global shortage of semiconductors.

As of 2:30 p.m. EDT, Xpeng's American depositary shares were up about 7.9% from Friday's closing price.

Xpeng said that it delivered 5,686 vehicles in May, up 483% from a year ago and up 10% from its April total. The sequential (month-over-month) result is significant because many China-based automakers, including Xpeng rival NIO (NIO -0.25%), reported manufacturing fewer vehicles than planned in May due to the global chip shortage.

NIO said early on Tuesday that its deliveries in May were down 5.5% from April because of chip-related manufacturing disruptions. The contrast is probably why Xpeng's stock is trading higher today. (Xpeng's other key EV rival, Li Auto, is expected to report its May delivery totals tomorrow.)

Xpeng's sales growth is being driven by strong demand for its P7, a handsome electric sedan launched last spring. The company has moved quickly to boost consumer interest, offering a limited-edition "P7 Wing" model with Lamborghini-like scissor doors, as well as a lower-cost variant that uses lithium iron phosphate batteries. 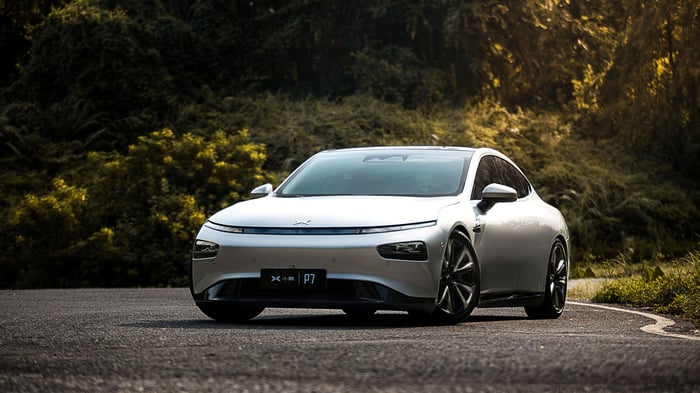 Xpeng delivered 3,797 P7s in May, in addition to 1,883 units of its first model, the G3 compact electric crossover. Both the P7 and the G3 are offered with lithium-ion and lithium iron phosphate battery packs.

During its first-quarter earnings call last month, Xpeng told auto investors that it expects to deliver between 15,500 and 16,000 vehicles in the second quarter, generating revenue between 3.4 billion Chinese yuan and 3.5 billion yuan. The company delivered a total of 10,883 vehicles in April and May; assuming no production disruptions in June, it seems well on track to meeting or beating that guidance.