Decent May sales and a new little pickup have investors jumping in.

Shares of Ford Motor Company (F 3.14%) were moving higher today, after the company reported that its U.S. sales were higher in May despite production disruptions, and that it will reveal a new small pickup truck next week.

As of 1 p.m. EDT on Thursday, Ford's shares were up about 6.4% from Wednesday's closing price.

Ford said on Thursday that its U.S. sales rose 4.1% in May from a year ago. While the company's year-ago sales total was down sharply amid the COVID-19 shutdown, the result was still something of a surprise given that Ford has faced a series of production disruptions because of the global computer-chip shortage.

The disruptions at key factories, including both of the U.S. plants that build Ford's huge-selling F-150 pickup, together with strong consumer demand for new vehicles have left Ford's dealers with depleted inventories.

Some of that was visible in Ford's May results, with sales of F-Series pickups down nearly 30% from a year ago. But the company still managed to sell plenty of profitable SUVs and commercial vehicles at strong prices, with minimal incentives.

Of particular interest to auto investors, Ford's Mustang Mach-E continued to do well, although U.S. deliveries were down from April as the company ramped up exports to key overseas markets. 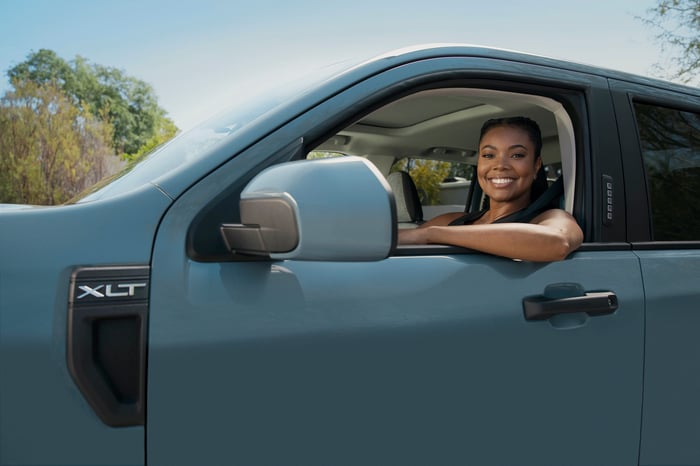 Actress Gabrielle Union will star in Ford's advertising for the all-new Maverick small pickup, which will make its debut next week. Image source: Ford Motor Company.

Separately, Ford confirmed several years of rumors when it said that it will reveal a new compact pickup truck called the Maverick next week. The Maverick is a so-called "white space" product, filling a market segment that Ford hasn't previously contested. It'll be built at Ford's assembly plant in Hermosillo, Mexico, alongside the mechanically related Bronco Sport SUV.

Ford said earlier this year that it expected to make 50,000 Mach-Es this year, but it's running ahead of that pace so far. Through May, Ford has manufactured 27,816 units of the Mustang Mach-E, of which 10,510 have been delivered to U.S. customers. Where are the rest? Some have been sold in overseas markets (the Mach-E was the best-selling vehicle in Norway in May) and many are in transit, to the U.S. and elsewhere.)

As for the chip supply situation, we might have to wait until Ford reports its second-quarter results next month to learn more.