Please ensure Javascript is enabled for purposes of website accessibility
Log In Help Join The Motley Fool
Free Article Join Over 1 Million Premium Members And Get More In-Depth Stock Guidance and Research
By Harsh Chauhan - Jun 23, 2021 at 11:15AM

The memory specialist might take off and justify an ambitious Wall Street price target.

Micron Technology (MU -3.74%) stock has underperformed the broader market so far in 2021, but Wall Street expects the memory specialist to soar remarkably in the coming year. Analyst Hans Mosesmann of Rosenblatt Securities has a one-year price target of $165 on Micron stock, which is more than double its current value.

The good news for Micron investors is that Mosesmann's price target doesn't appear to be overly ambitious. The chipmaker can easily clock high rates of revenue and earnings growth and deliver more stock upside. Let's see why that may be the case. 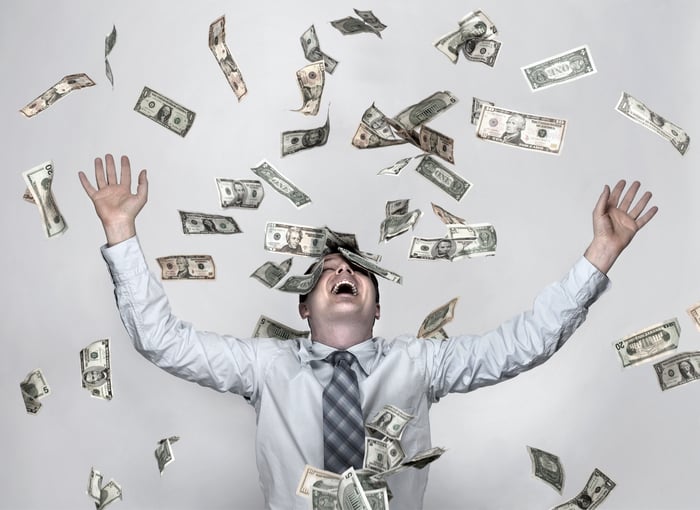 Micron Technology is growing at an irresistible pace

The demand for memory chips has exploded since the beginning of 2020 thanks to several factors ranging from increasing sales of personal computers (PCs) to the massive jump in sales of 5G smartphones. Additionally, data center operators are upgrading server storage capacity to tackle the increased load arising out of more people working or learning from their homes.

Micron has been winning big from this trend. Its growth has picked up impressively after unfavorable memory market dynamics wrecked its revenue and earnings growth in 2019. Its revenue for the first six months of fiscal 2021 has shot up nearly 21% year over year to $12 billion. Micron's net income has increased at a far greater pace, jumping nearly 57% year over year in the first six months of the year to $1.4 billion.

And Micron's outlook suggests things are about to get better. The company anticipates $7.1 billion in revenue for the recently concluded third quarter, translating into 31% growth over the year-ago period. Micron's projected Q3 earnings of $1.62 per share would be nearly double over the year-ago period's figure of $0.82 per share -- not surprising given that its adjusted gross margin could jump to 41.5% from 33.2% a year ago.

It is also worth noting that analysts expect Micron's pace of growth to improve. Its revenue growth could accelerate from an estimated 26% this fiscal year to more than 31% in the next one, with fiscal 2022 revenue expected to be more than $35.4 billion. Adjusted earnings per share are also expected to nearly double during both these years, growing from just $2.83 last year to $5.55.

For comparison, Micron's top line had contracted in fiscal 2020 to $21.4 billion and diluted earnings fell 55% year over year on the back of a major decline in the margins. All of this establishes that Micron is now in top form on the financial front, and it is not going to lose its mojo because of a few simple reasons.

Micron gets most of its revenue from the dynamic random access memory, or DRAM, market. It accounted for 71% of sales in the second quarter. Market research suggests DRAM prices will keep climbing north as demand continues to outpace supply.

Market research firm IC Insights estimates that the DRAM market will clock 41% revenue growth in 2021 on the back of improved pricing and tight supply. What's more, the firm estimates that the NAND flash market (which accounts for the rest of Micron's revenue) could finish 2021 with 22% revenue growth. That could be an additional catalyst for Micron as NAND pricing dropped 26% year over year in the first quarter of 2021. Prices stabilized in the second quarter, and they are expected to jump in the second half.

IC Insights estimates the overall memory market is on track to record 32% revenue growth in 2021. Such impressive growth looks achievable given that memory demand from the PC, server, and mobile markets remains strong. Market research firm IDC forecasts 18.1% growth in the PC market this year. The momentum could continue into 2022 on the back of component shortages.

Meanwhile, the accelerated shift to the cloud in the post-pandemic era is expected to create a 40% spike in server DRAM prices by the end of this year as compared to the end of 2020. And finally, Micron's mobile business is already reaping the benefits of the shift to 5G wireless technology. The mobile business had produced 29% of Micron's total revenue in Q2 and recorded 44% year-over-year revenue growth.

Micron's mobile business is set for multi-year growth as sales of 5G smartphones are on track to increase exponentially in the coming years. More importantly, 5G devices use more memory than their 4G predecessors, which paves the way for stronger volumes in Micron's memory business.

Thanks to all the tailwinds discussed above that could help Micron double its earnings over the next two years, it won't be surprising to see the stock follow suit and hit Rosenblatt's price target. Micron is one of the top growth stocks investors can buy right now as it is trading at less than eight times forward earnings, compared to the five-year average multiple of nearly 12.