Please ensure Javascript is enabled for purposes of website accessibility
Log In Help Join The Motley Fool
Free Article Join Over 1 Million Premium Members And Get More In-Depth Stock Guidance and Research
By Anthony Di Pizio - Jun 30, 2021 at 6:25AM

The digital car dealer has delivered impressive results, but one analyst is worried about possible shifts in vehicle prices.

Prices for both new and used vehicles have rocketed to all-time highs over the last 12 months, thanks to supply chain disruptions caused by the pandemic. The purchasing experience has been a nightmare as dealer inventories are severely depleted, limiting options for customers and adding to wait times on new orders.

Digital car dealer Carvana (CVNA -5.06%) has been a huge beneficiary, and investors have piled into the stock sending it up 1,000% since the pandemic lows in March 2020. It only sells used cars, and tends to hold a large amount of inventory -- so with rising prices and buyers flocking in because they can't get new cars, revenue has exploded. But last week, two big Wall Street analysts issued conflicting recommendations on the stock, and there's a good argument for investors cashing in some of their gains here. 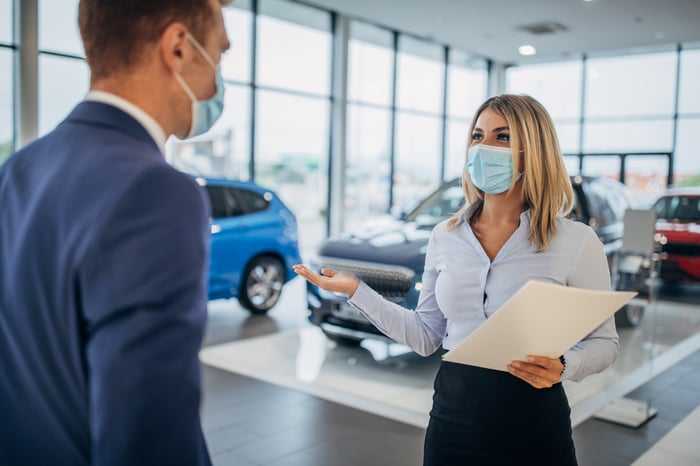 Investment banking firms J.P. Morgan and Jefferies are two of the biggest on the Street. When they issue analyses on companies, the market listens, but in this particular case, they released opposing views at the same time.

J.P. Morgan analyst Rajat Gupta downgraded Carvana shares to neutral from overweight, suggesting his view has tilted to a more bearish stance. The bank's price target remains at $325, and earlier this month the stock came just shy of that mark -- topping out at $323.39. So, this could be interpreted as a valuation call, since the stock effectively hit the price target and there were no new developments at Carvana to suggest it deserved an upgrade (in the short term).

Conversely, Jefferies maintained its buy rating on the stock and raised its price target from $375 to $400 -- the main driver being the current marketplace for used vehicles. The bank thinks persistent demand for used cars and low supply should continue to bode well for Carvana.

So who's right? There are some early clues. Used car prices rose 10% in April, and then 7.3% in May, however it appears prices could be about to top out. The Manheim wholesale index, which measures the prices paid by used car dealers who buy in bulk, has rolled over and begun to shrink. After hitting a high of 54% in April, it's now down to 36% and falling. If prices continue on this trajectory, Carvana could lose some of the record-high gross margins it has built through the pandemic -- in which case, J.P. Morgan would have made the correct call by downgrading the stock.

Carvana is famous for its novelty car "vending machines" -- although they're definitely no joke, with 28 locations now in the U.S. The company serves over 272 markets across the country, delivering cars directly to the consumer after they make their purchase online.

Digitizing the car market has certainly paid off. Carvana is now America's second largest used auto dealer -- and the pandemic offered the perfect environment to put its business model to the test. In the first quarter of 2021, the company sold over 92,000 cars, which was a 76% increase year over year. Consequently, revenue has also been climbing.

As the pandemic ramped up, so did Carvana's revenue. Delivering double-digit sequential growth is no easy feat, and it led to a $5.5 billion full-year 2020 revenue figure that was the highest in the company's short history. In fact, the company has grown the full-year figure by an impressive 550% since 2017.

No profits, but inching closer

The problem for Carvana has been profitability. It has carried negative earnings before interest, taxes, depreciation, and amortization (EBITDA) margins since its inception, but to the company's credit, it has improved every single year. In the first quarter of 2021, the company came incredibly close to delivering positive EBITDA, with a negative margin of just 1.3%.

Gross profit per unit hit a record high in the recent quarter, at $3,656 -- but if the Manheim wholesale index is right and prices have peaked, Carvana may have a problem on its hands. If it needs to start reducing prices, this will likely shrink the amount of money it can make on each vehicle sold, undoing some of the progress it made on margins over the last 12 months.

For investors focused on the long term, the coming shifts to car prices might simply be noise. It's clear Carvana has changed the way people buy vehicles, and consumers have been incredibly receptive to the business model.

The company remains on track to deliver positive EBITDA sometime in the next couple of years, and that will be a nice reward for those who have been patient. The short term might be incredibly uncertain, but there's one positive takeaway: The analysts at both J.P. Morgan and Jefferies have higher price targets than where the stock trades right now.

JPMorgan Chase is an advertising partner of The Ascent, a Motley Fool company. Anthony Di Pizio has no position in any of the stocks mentioned. The Motley Fool owns shares of and recommends Carvana Co. and Jefferies Financial Group Inc. The Motley Fool has a disclosure policy.