These three stocks could see huge tailwinds from the launch of 5G technology.

The 5G wireless technology rollout is just getting started. Just 30% of the world has access to the network today and an even smaller percentage of consumers own 5G-enabled smartphones. However, it's estimated that we could reach 3.6 billion 5G connections by 2025. Here are three stocks that stand to benefit from the rollout of 5G wireless technology.

1. Making the chips behind 5G

Qualcomm (QCOM -0.91%) develops integrated circuits and software to help power connected devices on 3G, 4G, and 5G networks. Its products are used in many smartphones, network and broadband equipment, and other devices (such as the Internet of Things). Qualcomm also develops and licenses out various patented technologies to other manufacturers.

Qualcomm is well positioned as a supplier to the 5G markets. Qualcomm's revenue for "Internet of Things" applications was $3 billion in 2020 but has grown in 2021, scoring $1.4 billion in the third quarter of 2021 alone, an 86% increase from the prior year.

Qualcomm supplies Apple with modem chips for the iPhone 12. However, Apple is thought to be developing its own alternative after buying Intel's modem chip business for $1 billion back in 2019. Apple is a significant customer for Qualcomm, estimated to contribute as much as 20% of the company's revenue, so investors will want to monitor any long-term developments in this situation. The two companies are currently partnered under a multi-year licensing agreement through 2025. 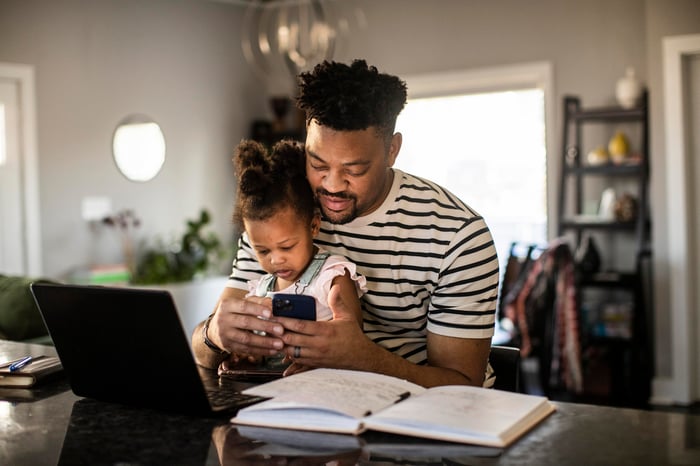 2. The network to deliver 5G

AT&T (T -0.89%) is a telecommunications company in the United States where a small handful of companies dominate the industry, including AT&T, Verizon Communications, and T-Mobile. The network carriers are the supporting infrastructure of 5G, best thought of as the roads and highways that transport cars (data) from one destination to another.

AT&T's business is very stable because the high cost of entry (wireless networks cost many billions of dollars to build out) results in a low threat of competition. The importance of wireless networks to society makes AT&T almost like a utility-"mission-critical" to customers. The company's wireless segment won $138 billion in revenue during 2020 and will benefit from steady device upgrades as customers switch to 5G-enabled smartphones over the coming quarters.

AT&T had tried to integrate media into its business model over the years, buying Time Warner in 2018 for $85.4 billion, but is now spinning its media businesses out in a deal with Discovery Communications that will make AT&T a pure-play telecommunications company once again.

Skyworks Solutions (SWKS -1.06%) is a company that develops and builds semiconductor products and is a competitor to Qualcomm. The company specializes in chips that filter out interference on communications devices and, like Qualcomm, is a major supplier to Apple.

Apple's business made up 56% of Skyworks' 2020 revenue, but it is diversifying its business to reduce its dependency on Apple. In April, Skyworks announced a deal to acquire Silicon Labs' automotive and infrastructure business segments in a cash deal worth $2.75 billion.

Skyworks will have exposure to both the 5G smartphone cycle and automotive market as vehicles become increasingly connected, which could create long-term growth opportunities for the business following the merger. Skyworks has estimated that resulting applications from 5G technology could double the company's total addressable market.

The difference between 4G and 5G could be as much as tenfold in speed, making 5G technology a true opportunity for innovation to occur across many industries. These three companies operate in the background, supplying the components and infrastructure that make 5G happen, and could bring big returns to patient investors.