More than half of all titles in the $175 billion video game industry were made with Unity's software.

Video game companies are navigating a tougher environment this year. The return of entertainment options that were closed earlier in the pandemic has crimped their sales growth, and that's being reflected in the companies' share performances. For example, stock prices for Activision Blizzard (ATVI -0.24%) and Take-Two Interactive (TTWO -1.76%) are only up by 4.3% and 3.8%, respectively, over the last year -- well behind the Nasdaq Composite index's return of 39% over the same period.

Meanwhile, Unity Software is rising above the tide. Shares of this leading game engine provider are up by 87% since its IPO in 2020's third quarter. 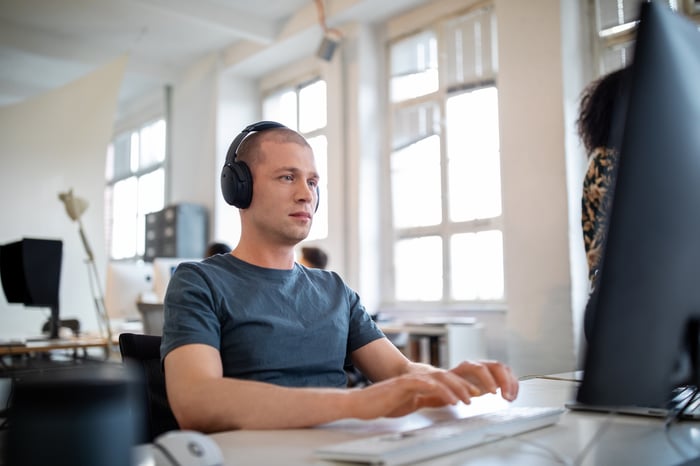 And in a year when overall video game industry revenues have been essentially flat, Unity's revenue is growing significantly. Plus, since a portion of Unity's revenue comes from subscriptions, it generates much smoother results, avoiding some of the top-line lumpiness that can plague game makers.

Analysts expect Activision Blizzard to post non-GAAP revenue growth of 4.6% this year, while Take-Two is expected to report a decline of 4%. Those forecasts are in line with industry-wide expectations. Market researcher Newzoo estimates the video game industry will post a slight decline of 1.1% in total revenues in 2021, landing at $175 billion.

For a broader perspective, the video game industry grew at an annualized rate of 12% per year from 2000 through 2020.

Unity's performance is in a different league. Its revenue grew 48% year over year in Q2 -- the company's 11th consecutive quarter of 30% or greater growth. Management also raised its guidance. It now expects revenue to increase by 35% to 37% for the full year.

Unity benefits from broad engagement in games across the industry. Developers subscribe to the company's industry-leading game engine to make video games across all major platforms: mobile, PC, and consoles. Subscription revenue is reported under its "create solutions" segment, which grew by 31% year over year to reach $72.4 million in Q2.

For example, Activision Blizzard's Overwatch was a popular title after it launched in 2016, and has sold more than 50 million copies to date. But in a competitive market for first-person shooters, interest in the game has waned. Activision Blizzard disclosed nearly a year ago that Overwatch only had 10 million monthly active users. That decline is one contributor to a lack of growth within the Blizzard studio in recent years.

The competitive forces in the industry are a key factor that drives growth at Unity. As new technologies emerge, including 5G networks and more powerful graphics chips, game studios are battling to take advantage of them to produce the most engaging experiences. These studios turn to Unity not only for game development tools and cloud hosting services, but also for payment, billing, and security features.

Unity competes with Fortnite creator Epic Games and its Unreal Engine. Unity and Unreal Engine are two of the most-used game development platforms in the industry, but Unity appears to be leading the market. More than half of all games are created with Unity, but management sees plenty of growth opportunities to deepen its market penetration with artists working on game projects across various studios. Unity's dollar-based retention rate was 142% in Q2, which indicates that its customers continue to upgrade and subscribe to additional services after joining Unity's platform.

Competition in the video game industry will continue to increase, which should spell more growth for Unity. The development of a virtual-reality metaverse will open up new channels in which game developers can engage players. Plus, new entrants are still joining the gaming market, including Netflix, which is currently in the early stages of expanding into video games. Also, Unity is positioned to expand its platform to non-gaming use cases over time.

At the end of Q2, Unity had 888 customers that generated more than $100,000 in annual revenue apiece for the company, up from 716 in the year-ago quarter. "We're growing faster than the industries in which we compete, and we're gaining share on our key markets," CEO John Riccitiello said during the earnings call.

Investors interested in video game stocks should consider buying shares of Unity Software first. It's basically earning a royalty on every game that gets made using its software, which should make it a great investment over the long term.