The cloud-based services company turns in another solid quarter.

For the full year, Veeva expects its revenue and adjusted earnings to increase by 25% and 21%, respectively. It's raised its full-year top- and bottom-line guidance for three consecutive quarters. 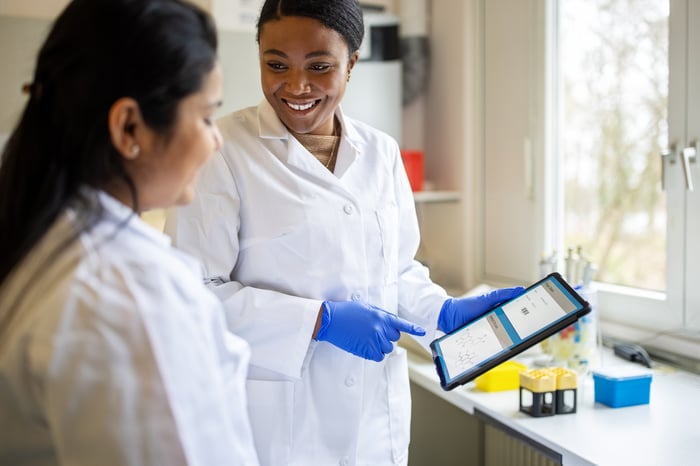 Veeva mainly provides cloud-based customer relationship management (CRM), storage, and analytics services for life science companies. At the time of its initial public offering in 2013, Veeva served 170 customers. It ended the second quarter with more than 1,100 customers, including pharmaceutical giants like AstraZeneca, Novartis, and Moderna.

These companies use Veeva's services to maintain customer relationships, manage their sales teams, store and analyze data, and track clinical trials and industry regulations. Veeva has established a first-mover advantage in this niche market, and it doesn't face many direct competitors. The growth of the life sciences market, along with intense competition between those top drugmakers, drives Veeva's growth and keeps customers locked into its ecosystem of cloud services.

That's why Veeva's revenue retention rate, which gauges its ability to retain customers and cross-sell additional services, rose from 121% in fiscal 2020 to 124% in fiscal 2021, which ended this January. That's also why Veeva's growth has remained so consistent over the past few years:

Unlike many other high-growth cloud companies, Veeva has remained consistently profitable by both GAAP and non-GAAP measures since its IPO, for two simple reasons: It has significant pricing power in its niche market, and it doesn't spend too much money on stock-based compensation expenses -- which accounted for 12% of its revenue in the first half of fiscal 2022.

But does Veeva's stability justify its premium valuations?

Veeva's biggest weakness is its valuation. Even after its post-earnings dip, it still trades at 88 times this year's earnings and 26 times this year's sales. That valuation is frothy compared to those of other cloud-based CRM companies.

Salesforce (CRM -4.99%), which powers parts of Veeva's platform with its cloud-based services, trades at 60 times this year's earnings and 10 times this year's sales. For the full year, Salesforce expects its revenue to rise 23%-24% this year, and for its adjusted earnings to grow 40%-41% (after excluding a big benefit from an accounting change last year).

Salesforce is much larger than Veeva and growing at a slightly slower rate, but it also expects to more than double its annual revenue to over $50 billion by fiscal 2026. Therefore, investors looking for a cheaper CRM play might prefer investing in Salesforce over Veeva.

Is Veeva's stock worth buying?

Veeva's stock is expensive, but I believe its dominance of the life sciences cloud market, its robust growth rates, its impressive financial discipline, and confident long-term revenue targets all justify its premium valuation. Conservative investors might favor Salesforce over Veeva, but I personally own both stocks -- since they'll both benefit from the secular growth of CRM platforms and the digitization of businesses.

Will Veeva Systems Stock Rebound From Its Recent Sharp Downturn?
376%