The brewer doesn't how much further down the bottom is.

Boston Beer's (SAM -2.32%) ride on the hard seltzer growth train is over, and the end is uglier than many people imagined.

Having already admitted in July it badly misjudged the alcoholic beverage's popularity, Boston Beer has been forced to concede again that demand is even worse than it predicted, and management withdrew its guidance for the rest of the year as a result.

Shares of the brewer hit a record $1,350 per share in April, capping a remarkable 750% gain in the five years following its introduction of the Truly brand in May 2016. But Boston Beer is now in freefall -- down 60% from its April high -- and investors would do well to stay on the sidelines until the damage can be assessed. 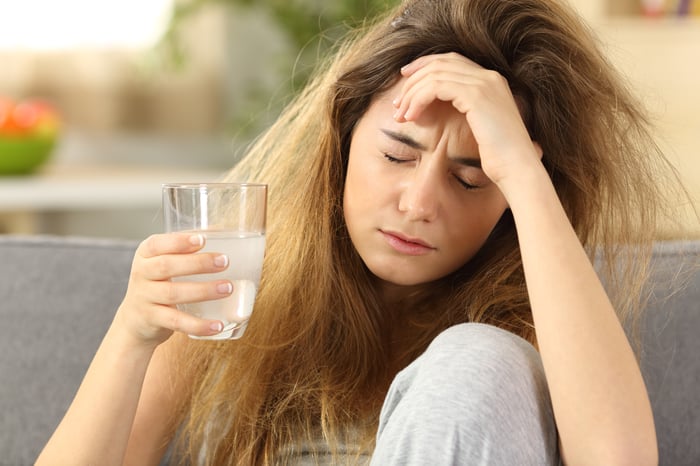 Hard seltzer's slowdown caught everyone by surprise as 2021 was supposed to be another year of rapid growth, but the shock waves from the sudden drop in demand are still being felt.

Boston Beer says industry reports indicate full-year hard seltzer volume will be over 100 million cases fewer than estimated in May, and there will be over 30 million fewer cases than the volumes forecast in July.

Data from IRI shows that for the 13-week period ended Sept. 5, hard seltzer volume grew just 4.4% year over year. While still growing, it's far below the level of gains recorded last year.

Boston Beer's own volumes increased well above the industry average in recent weeks with Truly's volume up 18% year over year, but that is less than half the rate it recorded over the first six months of 2021 and dramatically lower than the 141% gain it posted last year. And Boston Beer is not alone.

Industry leader White Claw from Mark Anthony Brands is down 11% for the period, Anheuser-Busch InBev's Bud Light Seltzer fell about 14%, and worst of all was Constellation Brands' Corona Hard Seltzer, which plunged 36%.

The brewer went all in on hard seltzer after its Samuel Adams craft beer faded from view. The beer has not posted a single quarter of depletion gains in over five years, and Boston Beer now produces more hard seltzer than beer.

Because it ramped up its seltzer capacity to meet expected consumer demand and contracted with third-party brewers to make up for any production shortfall, the downdraft it's now experiencing is forcing it to write off seltzer-related inventory costs and pay the contract brewers' fees for reducing or ceasing their production.

The brewer says it simply doesn't know how far down the bottom is, so its previously reduced full-year earnings guidance of between $18 and $22 per share is now worthless, and it will provide a new update during its October earnings call. Investors would be wise to wait until at least then before thinking about buying the dip.

Hard seltzer was not helped by the reopening of bars and restaurants as it tends to be an off-premises beverage, and we're now entering the fall and winter months when outdoor events are limited.

There's simply too much uncertainty facing Boston Beer at the moment. Even though the brewer's stock is down close to 50% year to date, there could still be a lot of air beneath the price if seltzer demand falls further.

While the brewer is scrambling to find the next new thing in alcoholic beverages, its flagship beer is in decline and its hard seltzer is going flat. There's little for investors to celebrate at the moment.