It's the Evergrande thing. But what does it really mean for GM?

Shares of General Motors (GM -0.10%) were trading lower on Monday amid a broad sell-off driven by fears that the deeply indebted Chinese property developer China Evergrande Group (EGRN.F 380.00%) could collapse and trigger a broad crisis.

Evergrande was once China's most prolific property developer. But right now it's known more for its debt: roughly $300 billion, enough to make it China's most indebted company.

With China's government signaling that a bailout won't be forthcoming, an Evergrande bankruptcy now seems likely. Many investors are concerned that an Evergrande collapse could have systemic effects. The company isn't the only big Chinese developer overloaded with debt, meaning that a sectorwide collapse is possible, which in turn would wipe out investors and the many contractors and suppliers that depend on these giant development companies.

That in turn (or so the thinking goes) could lead to a recession in China. And that in turn could have global effects. It doesn't take much economic knowledge to understand that auto sales fall in recessions, as consumers and businesses postpone big-ticket purchases. And given that GM is a significant player in China, it's not hard to see why the stock is down today. 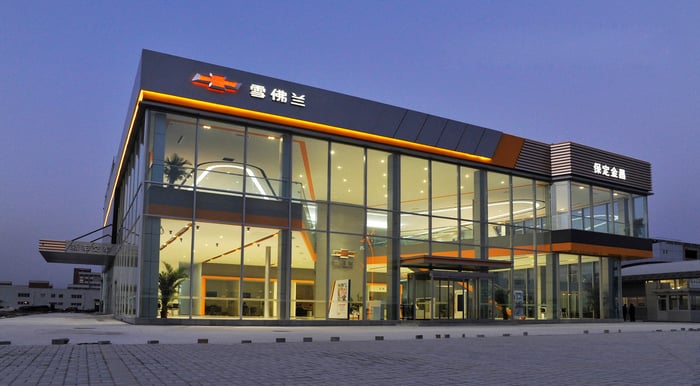 A Chevrolet dealership in Baoding, China. GM has been a major player in China for years. Investors fear that a Chinese property developer's failure could have a broad impact, including on auto sales. Image source: General Motors.

That said, auto investors holding GM stock for the long term need not be too concerned. The company has a healthy balance sheet and a hefty cash reserve that is specifically intended to ensure that its future product programs remain funded during economic downturns. GM is extremely unlikely to face existential risk, even in a severe downturn. This won't be 2008 all over again.

But that said, if auto sales in China and elsewhere were to decline for a while, GM's revenue, profits, and stock price would all be hit. I own GM stock and have no plans to sell, but take note: If Evergrande fails and brings others down with it, the next few quarters could be very bumpy ones for the automaker's stock.